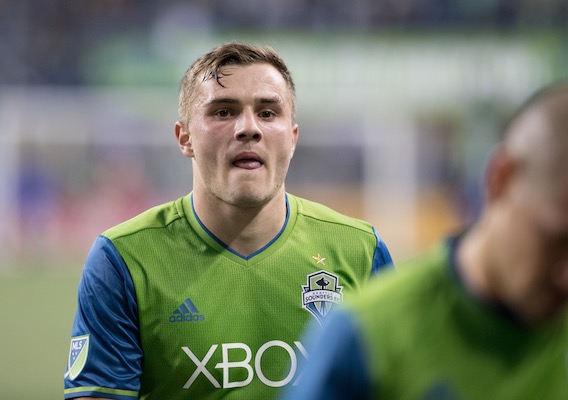 Two traditional powers have stumbled out of the gate in 2017, making Sunday's star-studded showdown between Seattle and LA a bit odd and potentially quite compelling. Also: Who's on the MLS Rookie Radar?
BY Franco Panizo Posted
April 20, 2017
11:00 AM

AN UNDERWHELMING SCORELESS DRAW between New England and San Jose last night probably didn't win over any new MLS converts but there are plenty of mouthwatering matchups on tap that should more than make up for it this weekend.

Among those showdowns: A battle of two of the biggest clubs in the league.

The LA Galaxy’s new chapter under head coach Curt Onalfo has not gone as expected, with inconsistent performances plaguing the club thus far. Things are not about to get any easier. On Sunday the reigning champion Seattle Sounders are set to pay a visit to StubHub Center and the primetime meeting between these two traditional Western Conference contenders will be intriguing given how badly each needs a victory.

Los Angeles is currently in eighth place in the West with six points from six games. Brian Schmetzer’s Sounders side also has six points but sits one spot below the Galaxy in the standings due to a worse overall record.

While neither team has been all that convincing through the opening weeks of the season—injuries and subpar play have contributed to this—both teams boast a healthy share of individual attacking talent that is capable of changing a game in the blink of an eye. The Sounders lean heavily on Clint Dempsey, Jordan Morris, and playmaker Nicolas Lodeiro while the Galaxy has Giovani dos Santos, the polarizing Jermaine Jones, and red-hot Romain Alessandrini at its disposal.

And there's the equalizer for @LAGalaxy!

Throw all those ingredients and others into a pressure-cooker situation, and fireworks are bound to go off. This might be a meeting of two of the lousier teams in MLS right now, but it should be entertaining and quite possibly explosive.

Another match likely to draw plenty of eyeballs will be Saturday’s tilt between the two stingiest defenses in the league. FC Dallas welcomes Sporting Kansas City to Texas in a clash of early-season Western Conference contenders, and both outfits will be looking to solve the puzzle that is the opposing team’s back line.

Thanks in part to the stellar play of athletic monster Ike Opara and makeshift right back Graham Zusi, Sporting KC has given up a league-low two goals through six matches. The attack has yet to really find its rhythm, but with Dom Dwyer scoring in a second consecutive game last week and Benny Feilhaber returning from injury, things appear to be, ahem, heading in the right direction.

Continued improved play in the final third will be necessary for Sporting KC if it hopes to pick up maximum points against FC Dallas. Oscar Pareja’s men have yet to lose at home in two regular season outings, and the club is also riding their stout play at the back. With Matt Hedges leading the way, Dallas has conceded just three times in league play so far in 2017.

Like Kansas City, however, FC Dallas’ attack has not kicked into gear despite talents like Roland Lamah on the roster. The 2016 Supporters’ Shield and U.S. Open Cup winner should fare better now that its participation in the CONCACAF Champions League is over, but a lesser workload does not automatically guarantee improved offensive output.

Villa scores from center circle earlier tonight while Cristian Colman whiffs & kicks the goalpost. It's been quite a night so far in #MLS.

The Eastern Conference also offers up a pair of interesting affairs—both set to take place in the New York metropolitan area.

The New York Red Bulls will first face off against first-place Columbus Crew SC at Red Bull Arena on Saturday night in a game that will pit two teams coming off Week 7 home wins. The player to watch here will be Crew midfielder Justin Meram, who has scored four times in his last four outings.

One day later, New York City FC takes center field stage at Yankee Stadium to lock horns with Orlando City. The 2015 expansion brothers already met once before this year down in Central Florida, but NYCFC will want to avenge that 1-0 loss in the season opener given how dominant it was in the run of play. Orlando City’s revamped defense has proven quite impressive, though, so New York City will likely need to be at its best in the final third.

If it had not been for a last-second stunner from David Villa, Philadelphia Union centerback Jack Elliott would have passed his debut test with flying colors.

Nonetheless, Elliott should get another chance to impress. The challenge this time? Ignacio Piatti.

The six-foot-five Elliott will attempt to help the Philadelphia Union end its dreadful winless start to the year on Saturday afternoon when the Montreal Impact arrivein town. The gangly centerback will not be solely responsible for limiting Impact playmaker Piatti, but will need to help in that regard given how much the Argentine likes to roam in the attack.

Another rookie to keep watch of this week is Portland Timbers defender Marco Farfan, who will be tasked with slowing down the Whitecaps’ speedy attack on Satruday. Farfan has looked the part in his four appearances thus far, but derby matches tend to raise the intensity level and will no doubt increase the pressure on him.