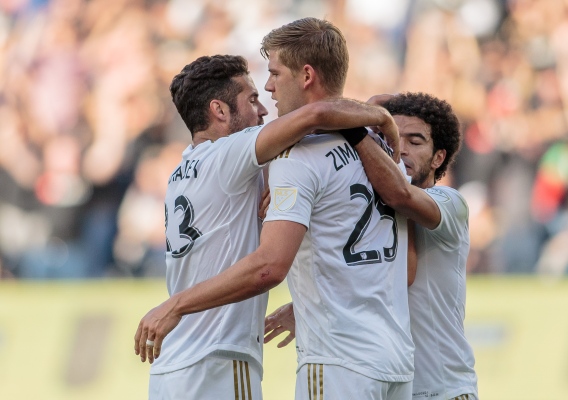 Zlatan started off strong with the Galaxy but is now frustrated, Kellyn Acosta is now back, the Red Bulls pipeline continues to produce, Monreal is awful, and Philadelphia's backline continues to mature - there was a lot to take in during Week 11 and Brian Sciaretta is here to break it down.
BY Brian Sciaretta Posted
May 14, 2018
11:00 AM
WEEK 11 OFFERED some insight but not many surprises. The Red Bulls continue to thrive with its local pipeline and Orlando is tough to figure out. Meanwhile, some of the biggest names in the league are on teams which are in trouble.

Here are my takeaways from the past few days.


The New York Red Bulls can withstand a lot. The loss of Henry? Bradley Wright-Phillips elevates his game. The loss of Dax McCarty? Tyler Adams arrives on stage. Sacha Kljestan traded to Orlando? Sean Davis is there.

This year the Red Bulls have not only upgraded at the playmaking role with Kaku Gamarra replacing Gonzalo Veron, but they have far more firepower off the bench – and like Adams or Davis, it was with a homegrown player in Derrick Etienne Jr.

Etienne, 21, showed promising glimpses last year but didn’t score a goal 712 minutes for the Red Bulls This year his finishing is dramatically improved with three goals through 255 minutes. On Saturday he scored what proved to be the eventually winner against Colorado.

While Wright-Phillips age is getting to be a concern, the Red Bulls have made upgrades at every position needed from last year plus the bench. Local talent like Tim Parker, the USL pipeline like Aaron Long, and a combination of both like Etienne Jr. have this club looking like it will be in contention yet again this season.


In theory, Toronto should be alright. The team has a ton of talent, has a lot of injuries, and still has a hangover from a run to the Champions League final.

Looking at the standings, Toronto fans shouldn’t be worried but a bit of concern is warranted. On Saturday, Toronto lost to New England 3-2 and is now 10 points out of the final playoff position. The team’s backline is decimated with injuries and Michael Bradley is now in central defense. Bradley is not a central defender and that not only hurts the backline but also hurts the midfield as well with his absence. Jozy Altidore won’t be back for over a month.

At a time when his team needed him, Sebastian Giovinco picked up a foolish red card for putting his hands on Wilfred Zahibio’s face after scoring and will miss Friday’s game against Orlando.

MLS can be a forgiving league but with a few more bad losses, Toronto’s gap could sneak into the teens. Then there is a huge problem.


The toughest team in the league to get a read on right now is Orlando City. Entering into the weekend, Orlando had a six game winning streak but none of its wins were particularly impressive. With the exception of a win over a Red Bull team consisting almost entirely of second stringers, Orlando’s nice run was against most of the lower half of the league.

On Sunday, Orlando had a chance to make a statement against one of the league’s better teams in Atlanta but came up short losing 2-1 at home. Justin Meram had a nice goal for Orlando but it wasn’t nearly enough and Atlanta was the deserved winner.

Less is known about Orlando now than before the weekend. It can beat bad teams but struggles against good teams. On paper, Orlando has very good wingers in Justin Meram and Chris Mueller. Dom Dwyer is one of the better forwards and Sacha Kljestan knows how to create chances in this league. Still, it is hard to take Orlando seriously as a team that should contend.


In any league in the world it is rare to have a team that starts two teenage central defenders. Philadelphia has been doing that at times this year with two local products Auston Trusty and current U-20 defender Mark McKenzie, both 19.

Philadelphia has had a poor start to the season but most of the team’s struggles have been with the underperforming front six and not the backline.

On Saturday, Philadelphia’s backline didn’t just play well away against Montreal, it kept a clean sheet en route to a 2-0 win. McKenize and Trusty both stood out – especially in the second half when both teams were reduced to 10 players after the 67th minute.

Philadelphia still has a long way to go but Jim Curtin is following through on giving young players opportunities.

Meanwhile, Montreal is woeful and has almost nothing going for it. With Ignacio Piatti past his prime, the Impact have little going for it.


The best game of the weekend was in Sunday’s nightcap where New York City FC and LAFC played to a 2-2 draw at the new Banc of California Stadium.

The game was wide open and both teams were well coached by Patrick Vieira and Bob Bradley. After the game there was a lot of respect between the two opponents.

“The game was difficult,” New York City’s David Villa said. “We played against a good team. I think good soccer was played between both teams – there was a lot of intensity and at the end of the game, I think we saw what both teams were capable of on the field.”

With the Western Conference lacking this season, there is a real opening for Bradley’s team to go a long ways this year. While in an expansion year, Bradley has a system that clearly fits his team’s strengths and it is fun to watch LAFC tends to play an open and aggressive game. The addition of another designated player should put more distance between it and teams likes Dallas, Vancouver, and Portland.


It was welcome news for U.S. national team and FC Dallas fans that Kellyn Acosta made his first start of the season on Saturday against the Galaxy in part of his return from a sports hernia. That injury has been bothering him since midseason last year and the Dallas native has been attempting to play through it.

In his first game back to the starting line he was strong and should be back to his former self in the weeks ahead. He helped FC Dallas control the game for the 60 minutes he was on the field and Dallas ended up sending the Galaxy to its fourth straight loss.

It was a revealing game. FC Dallas looks to be on its way to rebounding from a poor 2017 season. The Galaxy, meanwhile, are fading after getting waves of attention for signing Zlatan Ibrahimovi?. Weeks after his amazing debut, the Swedish legend is visibly frustrated with his team’s performance.

Meanwhile, Zlatan is not alone. Galaxy fullback Ashley Cole is also not happy and he took it out on FC Dallas fullback Reggie Cannon. Fortunately for Dallas, the teenage homegrown had a great response.


At Half walking back into the tunnel Ashley Cole was screaming at Reggie Cannon. I could hear cole shout “Can you speak!? Huh?!” The whole time Cannon tried to push him away. pic.twitter.com/jTxAuiYFZ9


Work until your idols become your rivals. Happy to get the 3 points… https://t.co/UhnBQnlq4j