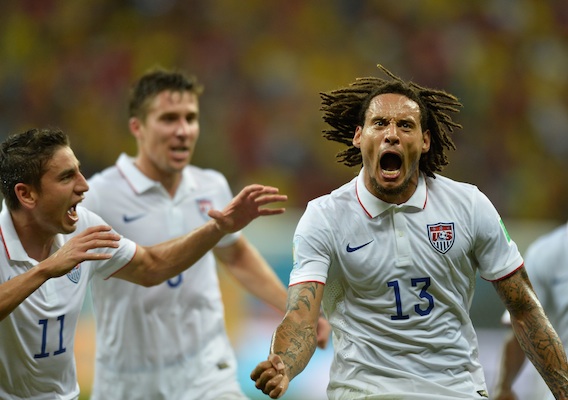 A few minutes after the Turkey friendly in Harrison, N.J., Jermaine Jones worked his way through the mixed zone and fielded all sorts of questions from all sorts of journalists. One particularly persistent writer representing a Turkish publication buttonholed Jones and tried to get the 32-year-old midfielder to say something, anything, about his time at Besiktas, the Istanbul-based club where Jones played this past spring. After several failed attempts to redirect the writer back to the U.S. national team, an exasperated Jones finally said that Besiktas wasn't a great fit for him, and that he would be moving on. I jumped in: "What about coming to play in MLS"? Jones' scowl immediately vanished. He raised his eyebrows and smiled. "I would like that," he said. Considering Jones' star turn in the 2014 World Cup, during which he outplayed every other U.S. athlete not named Tim Howard, Major League Soccer should like that too. The Frankfurt, Germany, native might require something approaching Clint Dempsey/Michael Bradley money to leave Europe and play in MLS, but he would be worth every penny. Los Angeles? One of the two New York teams? Chicago? He could make an immediate impact—on the field and off—for just about every MLS club. It needs to happen.

Jurgen Klinsmann's failure to utilize Mix Diskerud is one of the true head-scratchers of the 2014 World Cup. In a press conference after the Americans were eliminated, Klinsmann said he wished his team had pushed higher up the field and taken a more aggressive posture against Belgium and Germany. And yet Klinsmann left Diskerud, his most inventive and attack-minded midfielder, glued to the bench throughout the entire tournament.

Diskerud has skills, charisma, matinee idol looks, and a sub-optimal club situation in Norway, where he plays for league power Rosenborg but seems ready for a bigger challenge against tougher competition. And yes, he would thrive in NYC.

Contradictory? Counterproductive? I don't think so. It's one thing to sell off a high-ceiling prospect—say, 21-year-old DeAndre Yedlin—to a deep-pocketed European team that is willing to go long in the hope of finding a bargain. That could turn out badly for MLS, since Yedlin's real value is still a huge question mark. But Matt Besler, 27, and Omar Gonzalez, 25, are not prospects. They are who they are—former NCAA stars and MLS veterans who played great in the World Cup and deserve a chance to cash in on their performances. Besler makes $200,000 per year for Sporting Kansas City. Gonzalez is a designated player for the Los Angeles Galaxy and brings home $1 million annually. Those numbers could ratchet up in a hurry for both defenders if they move abroad, and their clubs stand to secure some decent transfer money in the process—money that could be spent on young talent. There's no shame in selling players to bigger clubs in bigger leagues. PSV sold Arjen Robben to Chelsea; Chelsea moved the Dutch star to Real Madrid; and the Spanish giants turned around and sold him to Bayern Munich. It's how the soccer world works—buy low, sell high, keep trying to improve. As well as both players performed in Brazil, neither is a box office draw. MLS should not stand in their way.

Millions of potential MLS fans watched the World Cup this summer—at home, at work, in bars, and at fan fests. These Americans got a taste of high-level soccer, and many of them will be looking for more of the same after the tournament is over. But where will these nascent fans turn to next week when they look to scratch their soccer itch? Some will stumble upon MLS, absolutely. It's a good product and there are quite a few good players. But many more will look to Spain, England, Germany, and Italy to continue/expand their love for the game. Why? Because TV makes it easy for them to do so and that's where the best players are. Let's consider the audience's perspective: Why would a freshly minted World Cup fan watch the New England Revolution when she can follow Manchester City or Bayern Munich or Real Madrid instead? The Major League Soccer salary cap is $3.1 million per team. Yes, there is the designated player exception and the Generation Adidas exception and other Byzantine caveats that allow teams to push that number up a bit higher. But when Thomas Muller, the seventh-highest paid player on Bayern Munich, makes nearly twice as much as MLS' per-team salary cap, it's going to be hard to lure World Cup-quality talent to the league. When Robin van Persie makes more in one week ($340,000) than any Colorado Rapids player makes in an entire year, it creates the perception that Major League Soccer puts out a minor league product. David Beckham wants to get rid of the salary cap. "That's what we'll work for," Beckham said earlier this year in an interview with beIN Sports' Christian Vieri. "We'll work towards that, because obviously that's one of the things that honestly stops a lot of players coming over here." We're right there with him on that.

Speaking of Beckham, wouldn't it be great to have one of the biggest brands in all of soccer helping MLS capture the attention of some of these new American soccer fans?

Instead, Beckham, an MLS franchise owner-in-waiting, is stuck in limbo as he struggles to secure a stadium site in Miami. The whole situation in south Florida has disaster written all over it. By the time anything gets done down there, the World Cup momentum will be a distant memory. So how about Plan B? Give Beckham Chivas USA—which is currently owned by MLS—allow him to rebrand and rebuild it, and the league can have a real rivalry in the country's second-biggest media market. Yahoo's Martin Rogers wrote about this possibility, and it makes a ton of sense. Yes, there would be logistics to work out, but a Beckham United team could play at the Stub Hub Center for a few years while it secured a new building and worked on its To Do list.Beckham loves Los Angeles. Los Angeles loves him. The SoCal sunshine and Hollywood glitz will help Beckham lure exciting players to the league. And if everybody really wanted to make this happen, it could all be in place in time for the start of the 2015 season. John Godfrey is the founder and editor in chief of American Soccer Now.