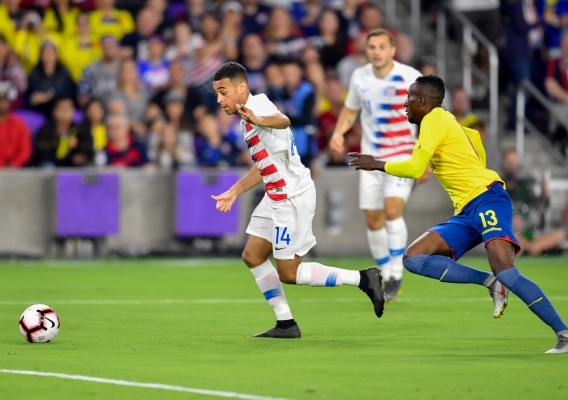 The USMNT defeated Ecuador in the first game of this international window. As it now prepares to take on Chile in Houston, here are 5 thoughts from the win on Thursday night in Flordia.
BY Brian Sciaretta Posted
March 22, 2019
4:00 AM
THE UNITED STATES national team continued to show progress under new manager Gregg Berhalter as the team downed Ecuador 1-0 on Thursday night in Orlando. Form the onset, Ecuador was playing a defensive approach and looked for counter attacks but it was a deflected shot from Gyasi Zardes which secured the win.

The win was an important step because it showed that the U.S. has direction and talent but also that it has a long way to go to reach its potential.


Ecuador came into the game with a focused defensive approach and were clearly looking for quick breaks on counterattacks. The U.S. team struggled to generate opportunities against the bunkered in opponent. Arriola had the best chance in the first half after a solid combination from Gyasi Zardes, Weston McKennie, and Christian Pulisic but his shot was saved.

The other solid chance from the U.S. in the first half came when Wil Trapp’s sublime ball found Arriola behind the backline but Arriola’s pass was unable to connect with Zardes.

But when opponents bunker in, the U.S. team has to do better with taking defenders on 1v1 play or with combinations in or around the box. Zardes had a pretty good game and his first touch wasn’t a weakness. While his hold up play was solid, he wasn’t in many dangerous positions close to the goal. Likewise, Jordan Morris wasn’t able to create much down his side of the field or beat defenders effectively. Arriola was the best among the front three with his movement.

But when the front three aren’t getting into dangerous positions, it puts too much stress on Christian Pulisic or Weston McKennie to combine or take defenders on.


The most controversial approach from Gregg Berhalter came this week when he announced that Tyler Adams would play right back in this camp. The approach would have Adams cut into the middle of the field and play as a central midfielder when the U.S. has the ball and then back to right back on defense.

For the most part, it was successful against Ecuador. Adams saw plenty of the ball and was involved in the attack. He was caught out of position a few times defensively but Aaron Long did well to come out of central defense to cover for him.

If Berhalter wants to stay with this approach, it was a good starting point but still needs improvement. Adams is one of the best American midfielders from a defensive standpoint. This is shown by the fact that Leipzig has conceded just one goal in the 747 minutes Adams has been on the field.

Is the U.S. team losing much by not having the defensive bite of Adams in the midfield without the ball? How will this hold up against teams which are better than Ecuador? Can Adams continue to evolve in the role in order to take on better opponents with his approach?

Adams showed an impressive Soccer IQ in this game to pick this role up as quickly as he did. If he can show the same level of improvement in future camps, it could work.


The reason why Berhalter likes Trapp so much is that the new manager wants a long-range passer in his system. He wants to have someone who can play the front five into very dangerous positions.

On Tuesday, Trapp showed an outstanding passing range and his passes were deadly accurate in either playing the wings beyond the defense or playing Pulisic, McKennie, or Zardes into advanced positions. It was the best Trapp has ever looked for the national team.

But Trapp is not the perfect player and he brings his own drawbacks. Against a more aggressively pressing team, will he be able to hit the same kinds of passes under pressure? That remains to be seen although with more defenders pressing him, Trapp will have more open teammates he can play into dangerous areas.

Another concern over Trapp is when the game gets physical and he has to play with defensive bite. In the international game, the No. 6 has to be able to shield the backline or win possession back from opponents. Will having McKennie drift back from the front five help Trapp enough?

Berhalter is willing to have a complicated game plan in order to have solid long-range passer but it would be interesting if a defensive midfielder develops in the years ahead who can hit the passes Trapp can while also thriving defensively. That could be enormously valuable for the U.S. team.

That is not to take away Trapp’s strengths as a player or potential value to team. Despite his drawbacks, he had a very good game against Ecuador.


John Brooks and Aaron Long had very strong outings against Ecuador – both individually and collectively as a central defense unit. While Ecuador was defensive in nature, both Brooks and Long had quite a bit to do.

Aaron Long’s mobility was key to the win. There were multiple times that Adams was caught in the midfield and left a lot of space on the right flank. Long was able to close down space and stop several opportunities before they even happened.

For Brooks, his best moment came in the end when he bailed out a bad mistake by Tim Ream and stopped a good chance from Ecuador before the attacker could get a shot off.

Collectively, both Brooks and Long were in synch. Both were excellent in their passing out of the back and playing the ball into the midfield.


Against better opponents, the United States delivery on set pieces will need to be more dangerous. Pulisic’s corners offered little and Ecuador was able to easily handle every set piece delivery into the box. The U.S. team has a lot of options to finish balls in the box. The central defenders, McKennie, and Zardes are all solid in the air.. The weapons are there but the U.S. was never able to muster anything dangerous from their set piece deliveries.