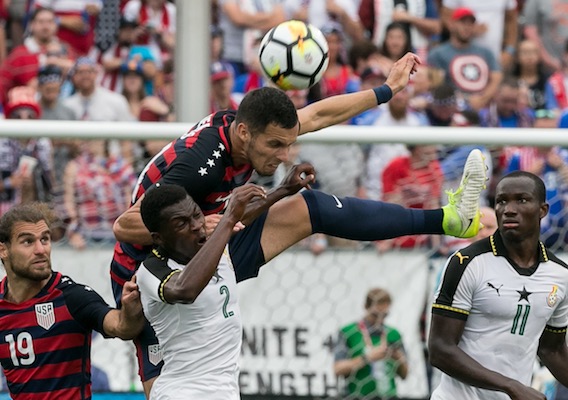 5 Thoughts on the United States' Victory Over Ghana

Brian Sciaretta watched Saturday's 2-1 win over Ghana a second time, looking for nuances and subtleties that might have slipped past during his initial viewing. Here are five key takeaways to consider.
BY Brian Sciaretta Posted
July 03, 2017
9:30 AM

AS ALL AMERICAN SOCCER FANS should know by now, the United States defeated Ghana 2-1 Saturday in a tune-up friendly ahead of the 2017 Gold Cup, which kicks off this weekend. It was an important test for the team because Ghana provided better opposition for the U.S. than it will face until, perhaps, the final.

After a second viewing, the U.S. performance looks even better than it did in real time. For a team with many players new to the international stage, Bruce Arena's squad played with hunger and was always looking to make dangerous plays. Bottom line: The Yanks were fun to watch.

There has been a lot of talk among fans and the media about whether or not this particular roster is an A-team, B-team, or C-team. That line of thinking is a mistake. This is not a later-era Jurgen Klinsmann January Camp where newcomers had minimal chance to prove themselves and make a case. This Gold Cup is a legitimate audition. It would hardly be surprising to see several players use this tournament to leapfrog over others who many consider to be on the so-called A-team.

So while Saturday's game was just a friendly, it also was the best learning experience the team might have most of this month. Here are the takeaways.

After one viewing, Dax McCarty looked like he had a very strong game. Upon second look, he was even better—easily the best performance for either team. His passing was at very high level as he connected more than 95% of his attempts. But what is even more impressive is just how aggressive he was as he was always looking to play the ball forward and into dangerous positions.

Dax McCarty completed 95.4% of his passes (62-65), highest rate by #USMNT outfield starter in a game since Brooks & Orozco vs BOL last May.

So what does this type of performance mean? McCarty, 30, will almost certainly play a key role in the Gold Cup but he also has a big opening moving forward. So many of the central midfielders currently in the national team picture are box-to-box by trade: Michael Bradley, Kellyn Acosta, Cristian Roldan, Sebastian Lletget, Jermaine Jones, etc. There are not many players comfortable in the No. 6 role.

McCarty is actually one of the best passers in the entire pool, he has good vision, and he can do the defensive dirty work to help shield the backline. It was an oversight by Jurgen Klinsmann to not give McCarty a chance in his prime.

The Chicago Fire man has his limitations. He might struggle in a very physical game and his speed isn’t great. But in the right environment he can proved very valuable trying to play the ball forward and help with possession.

Dom Dwyer, 26, made a strong first statement in the Ghana match, scoring the opening goal and playing with his trademark aggression. It is true that Dwyer was in position to score two or even three goals and probably should have had more but he had a good debut.

On second viewing, Dwyer’s off-the-ball movement stood out. His finishing might have let him down but if he continues to make these types of runs, numerous opportunities will follow. When his teammates continue to learn more about him and the runs he makes, it will only get better.

Dwyer has been a consistent performer with Sporting Kansas City for four years. His finishing will be fine. There is a very good chance that Dwyer could join Bobby Wood, Jozy Altidore, and Clint Dempsey among the top four forwards.

The New England Revolution are tough to watch but Kelyn Rowe has consistently produced for his club and, like Dwyer, stood out on Saturday in his United States national team debut. In the first half, he sent a few decisive passes that nearly set up Dwyer and then in the 57th minute he drew the dangerous free kick that led to Kellyn Acosta's goal.

It has been a while since the U.S. team had players that were so naturally comfortable out wide. Most of the wingers used there over the past six years were playing out of position—Alejandro Bedoya, Darlington Nagbe, Danny Williams, DeAndre Yedlin, Sacha Kljestan, etc.

Arena seems to be addressing this problem quickly. Arriola has had his ups and downs but he is a pure winger. Rowe can play centrally or at either fullback position, but his best position is out wide.

Rowe has a long way to go before he is penciled in as a starter in a big game, but there is no reason why he ca'tn fight for a roster spot if he continues to play well. The fact that he was constantly trying to break the game open and did not look in awe of the moment was a welcome sight.

One of the more disappointing takeaways from the game was Jorge Villafana’s defensive effort. Villafana made strides in the attacke and he showed a lot of skill making a nice move in the box on Dwyer’s opening goal.

But Villafana also struggled with the physicality of the game against Ghana. He gave up a penalty and that led directly to Ghana's free-kick goal. It has to be a concern for Arena, who likely wasn’t thrilled with his left back options to start the cycle and was hoping Villafana could provide some sort of stability.

It would be unwise to write off Villafana based on Saturday's game but Arena might continue to look and explore the pool at that position. Eric Lichaj is in camp and could be an option at that spot.

If the World Cup started tomorrow, John Brooks and Geoff Cameron would likely be the United States' starting central defenders. Beyond that, the depth chart seems to be a mystery—or at least Arena has offered no clues as to the pecking order.

Tim Ream, Matt Besler, Omar Gonzalez, Walker Zimmerman have all featured and it appears as if Steve Birnbaum is fading.

On Saturday, Matt Hedges made his first start for the national team and fit in well. He broke up several plays and his distribution out of the back was impressive. It will be tough for him to crack the top four but it is within reach. Assuming Arena likes to go with left footers on the left side of central defense and right footers on the right side, then you have a battle between Brooks, Besler, and Ream on the left side. That would leave Cameron, Gonzalez, Hedges and Zimmerman on the right side. If Hedges can pass Gonzalez, then he might find himself on the plane to Russia.

This Gold Cup will unveil some clues as they are both on the roster. Still, Gonzalez probably has the edge at the moment after a nice outing at Estadio Azteca last month. That said, things can change quickly—and they often do.

What do you think of Brian's second-viewing take of the U.S.-Ghana match? Agree or disagree with his insights? Share your thoughts below.