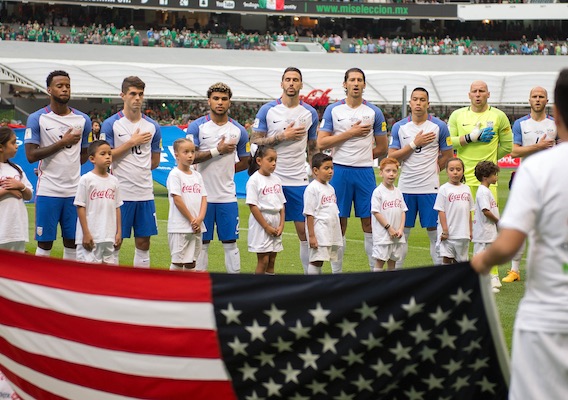 5 Thoughts on the U.S. Tie With Mexico at the Azteca

Beyond the impressive result, Sunday's match against Mexico provided some key insights into the U.S. national team, highlighting players on the upswing and confirming that Bruce Arena is a man with a plan.
BY Brian Sciaretta Posted
June 12, 2017
4:00 AM

FOR JUST THE THIRD TIME IN ITS HISTORY the United States walked into Estadio Azteca for a World Cup qualifier and came away with a point. This time was unique, however, because the Americans had multiple chances to actually win a qualifier at the storied stadium.

Possession heavily favored Mexico but the Yanks were effective when they had the ball. The U.S. generated seven corner kicks. It hit the post. Its best striker whiffed on a point-blank chance. Its teenage sensation had a wide open shot from 18 yards that he hit wide. Of course, the U.S. also scored a wonder goal. A 1-1 result was more than fair.

When taking the historic nature of the rivalry and looking at this game in isolation, the U.S. is firmly back on track in World Cup qualifying. The four points from these last two games should help the team book a ticket to the 2018 World Cup in Russia.

1. Team is buying into Bruce Arena

Last year, Sunil Gulati made the right decision to fire Jurgen Klinsmann. It was clear the team had lost faith in its coach after five years of up-and-down results.

Bruce Arena is a completely different coach than Klinsmann and the players are responding well. Over these last few games the team fought for each other and bought into Arena’s system. With a five-man backline, there needs to be good chemistry and communication—and there was.

With Arena able to make significant lineup changes on just two days of rest, travel to Mexico, and put on a strong performance, it speaks well to having a strong locker room. Most importantly, the players are all put into positions where they are most likely to succeed. That wasn’t the case in previous years.

Now heading into the Gold Cup, Arena will have the chance to experiment with talent and expand his player pool.

2. Bradley’s goal was one for the ages

When you consider the stage, the importance, and the quality of the strike, how many U.S. national team goals have been at the level of Bradley’s strike against Mexico? There have been a few, for sure. Wynalda’s free kick at the 1994 World Cup comes to mind. Bradley's goal is at or near the top of the list.

After a quick turnover, Bradley realized he had a narrow opening for a chip. To hit it from 40 yards out in Azteca, and in an important qualifier, is remarkable.

Bradley overall had a solid game, especially on the defensive end. He made a few bad fouls but that is to be expected with Mexico controlling the possession. If his shot from distance in the second half had gone in instead of hitting the post, we’d be talking about a once-in-a-lifetime performance from the U.S. captain.

The U.S earned this result largely thanks to the play of its three central defenders. Arena utilized a new formation for this match and it paid off. The one time the U.S. defencse came up short was on Mexico’s counterattack goal, where the Yanks did not track back quick enough. That said, sometimes you just have to tip your hat to your opponent—that was one of the best counterattacks you’ll ever see.

Geoff Cameron rasied his game on Sunday. The Stoke City stalwart wasn't particularly strong in Thursday’s win over Trinidad & Tobago and did not seem on the same page as central defense partner John Brooks. Against Mexico, he was the Man of the Match for the United States. He broke up play after play and was able to utilize his physicality when the game demanded it.

Omar Gonzalez missed a point blank header in the first half which could have given the U.S. a second goal but defensively he was an important addition—primarily in the aerial game. Tim Ream was quiet but effective.

These three players held a talent-rich Mexico side to just one goal. They were in-synch with each other and it was impressive to see. Will Arena will use a five-man backline with three central defenders again? Hard to say, but he should keep it under consideration, for sure.

Arena asked an awful lot from DeAndre Yedlin these past few weeks. Playing under Arena for the first time, Yedlin started three games in eight days, all at high altitude, and went 90 minutes in each contest. The final game came, played in the beehive that is Estadio Azteca, came after just two days of rest.

If there was any doubt as to who was going to be this team’s starting right back under Arena, Yedlin likely ended that debate. Yedlin left it all on the field and while he looked out of gas a few times, he responded well. Mexico had success attacking down Yedlin’s side later in the first half but in the second half, El Tri was not nearly as effective on Yedlin’s side.

When looking at the winners and losers after these three games, Yedlin is definitely on the positive side of the ledger.

5. Acosta made a case to start

A major question mark for the U.S. team is how would it move on from the Jermaine Jones-Michael Bradley central midfield pairing? Someone needed to step up and make a case for the position.

Kellyn Acosta had a huge opportunity against Mexico and delivered a strong performance. Bradley looked comfortable with Acosta patrolling the midfield nearby. Whenever the U.S. had possession, Acosta connected well and was looking to push the ball into dangerous areas.

It is safe to say Acosta hasn’t won the job yet, but his stock is rising very quickly. He is a player that has been trending well all year long and could have a bright future ahead with the U.S. men's national team.

What did you think of the United States' performance last night? Share your take in the Comments section below.