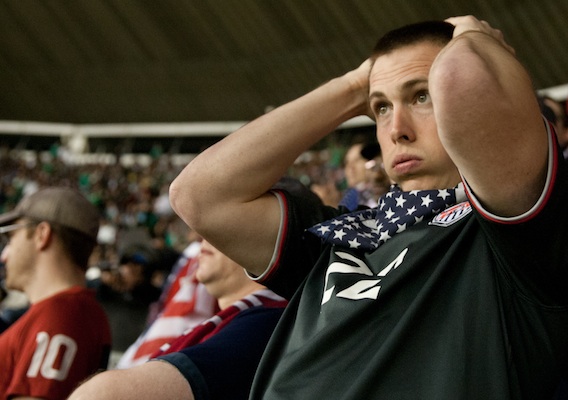 Clint Dempsey is back. Michael Bradley looks like a world beater. Jurgen Klinsmann knows how to win. But that doesn't mean everything is hunky dory for the U.S. national team. Here is John Godfrey's take.
BY John Godfrey Posted
April 16, 2014
8:02 PM
WITH 60 OR SO DAYS until the United States men's national team marches onto the pitch to face Ghana in Natal, Brazil, there's plenty to be optimistic about. But we're not going to address any of that—not today. All is not well with Jurgen Klinsmann's side, and he knows it better than anyone. Klinsmann was a ruthless striker during his playing days, and he has shown a similar streak as coach of the U.S. national team. He shunted then-captain Carlos Bocanegra to the sidelines last February and he did the same to his friend and confidant Martin Vasquez a few short weeks ago. Hey, sometimes you've got to do what you've got to do. So I'm going to follow the coach's lead and say what needs to be said, ruffled feathers be damned. Here's what I'm worried about right now.

Yes, Omar Gonzalez had a few good moments against the Portland Timbers Saturday night—a sliding clearance here, a half-dozen towering headers there. But the six-foot-five Los Angeles Galaxy defender is clearly struggling. He was at least partially to blame for both of Mexico's goals in the April 2 friendly, but, more worryingly, it seems like he always takes two-to-three plays off per match. These intra-game coffee breaks may be acceptable in Major League Soccer—perhaps they're even mandated in the MLSPU collective bargaining agreement—but they're certainly not going to cut it in Brazil. Where is that edge, that intensity, that focus, that Matt Besler and Geoff Cameron and Fabian Johnson always seem to have? Gonzalez has not demonstrated these attributes on a consistent basis across 90 minutes, and he hasn't for quite some time now. Two years ago Gonzalez seemed to be on the right trajectory. Signed to play in Nuremburg, he came thisclose to the Bundesliga and all of its harsh lessons. Gonzalez was going to discover what it took to scratch and claw his way into the starting lineup on a weekly basis. He was about to experience what Bayern Munich and Borussia Dortmund were all about. He truly was on the verge of taking that next step. But then a training ground collision with Timothy Chandler ended the European adventure before it began, and Gonzalez returned to the cozy confines of Southern California, Major League Soccer, and a guaranteed spot in the Galaxy Starting XI. Since then he has had good games and he's had more than his fair share of clunkers. Six months ago I would have bet the ranch that Gonzalez was going to play 270 minutes in the Group Stage of the 2014 World Cup. Now? The thought of that terrifies me. There are whispers that Gonzalez is determined to return to Europe after the World Cup, and I think that's a great idea for his longterm development. The more immediate concern, however, is this: How is Gonzalez going to step up his game between now and June 16? It needs to happen, or he needs to be benched.

Here are your options, America.