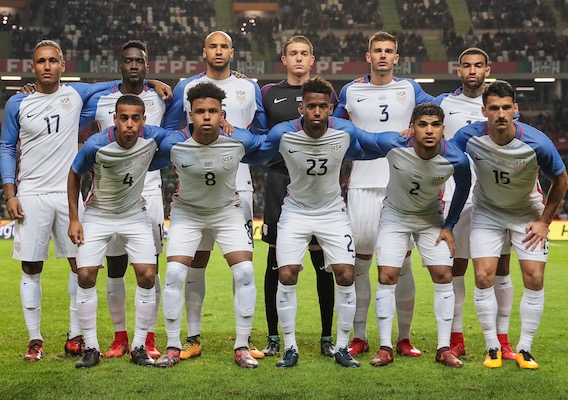 American Soccer Now Contributing Editor Brian Sciaretta watched Tuesday's draw a second time so he could focus on certain nuances and write the analytical piece you are now about to read.
BY Brian Sciaretta Posted
November 15, 2017
6:00 PM

WITH TUESDAY'S 1-1 draw against Portugal, the U.S. men's national team learned a fair amount about its player pool. Playing under a caretaker manager on the heels of a wave of negative publicity following a failure to qualify for the World Cup, the circumstances of the game were not ideal.

For the most part, the players on the field against Portugal were not involved in and not responsible for the Hexagonal debacle. Still, they had to deal with the distraction it caused and they responded well. If not for a goalkeeping blunder from Ethan Horvath, the U.S. would have won and it was the better squad over the course of 90 minutes.

It was particularly exciting because the three teenager debutants all responded well—and Weston McKennie looks like he could be a special player. Here are five thoughts on the match.

There needs to be a lot of turnover in this area of the field. Omar Gonzalez probably played his last game for the national team after terrible showings in September and October. Tim Ream wasn’t much better. Geoff Cameron will turn 37 before the 2022 World Cup. Matt Besler actually was one of the better players in 2017 but it’s time to move on from him too.

What we have now is a new group of central defenders who seem ready. In June, John Brooks, 24, became the most expensive transfer ever for an American player and the Wolfsburg man should be ready to take the reins (provided he can stay healthy). Brooks was top notch in the first half against Portugal and so was Matt Miazga, 22, who looked like a polished veteran. Miazga's development at Vitesse has been impressive.

Cameron Carter-Vickers also helped his case when he came on in the second half. The British-born Carter-Vickers was a steadying force and it helps he is now a regular starter for promotion-contending Sheffield United as opposed to toiling away on Tottenam’s bench. Both Miazga and Carter-Vickers have come a long way this year.

Fast-rising Justen Glad will enter the mix soon (probably at January camp) and Erik Palmer-Brown is set for his European move in 2018. Central defense is in excellent shape to start the rebuilding process.

Horvath and the Goalkeeping Role

Portugal’s one goal came from a massive blunder from goalkeeper Ethan Horvath who is struggling right now. His start to the 2017-18 season at Club Brugge has not been great and he is on the verge of losing his starting spot after giving up a few poor goals.

The United States desperately needs to move on from the Howard-Guzan-Rimando trio which has been the core for over five years.

Horvath is certainly not out of the mix but he certainly failed to seize the opportunity on Tuesday. Meanwhile, second-half sub Bill Hamid was a massive improvement and he should be in the mix. What is key for Hamid, of course, is to seize the starting job at his new club, FC Midtjylland, in Denmark.

Others will also get time in the year ahead. Zack Steffen remains a top candidate and should get his first cap in January, as will FC Dallas keeper Jesse Gonzalez.

After nearly 30 years of stability, the goalkeeping position for the U.S. national team is unsettled and wide open. The good news is that there are young keepers in the mix.

McKennie lives up to the hype

Ahead of Tuesday's match, all eyes turned to 19-year-old Weston McKennie, who recently earned a starting central midfield job for a top four Bundesliga team.

“I want to be one of those players that are hyped up and maybe give them more stuff to hype up,” McKennie told American Soccer Now. “I just want to keep the train going forward.”

And he did just that with a first-rate performance that will only add fuel to the hype train. Not only did he score a nice goal, he also hit the post on a header, was a very effective passer throughout the game, and won balls defensively. He fit very well into the high-pressing system the U.S. team utilized in the first half.

The coming year should tell us a great deal about this talented teen.

Tyler Adams, 18, was expected to make his debut in this game but it was interesting that Dave Sarachan gave him the start. The result was a flawed but still very positive performance from Adams.

In the first half, Adams wasn’t always crisp with his passes although he improved as the game went on. What was important is that he was making very smart runs off the ball that helped open up the game. Defensively, he hustled to close down passing lanes and force turnovers.

Above it all, Adams did what he always does and brought energy to the game. When the full national team crashed out against Trinidad & Tobago, there was a total lack of energy. Adams brings enthusiasm and energy to games that the team can use. It’s an important intangible benefit.

But Adams will need refinement. For the Red Bulls he prowls all over the field and at times it looks like there are three of him on the field at once. That can be good but at the highest levels, will he be allowed to do that or will he need to stick with a more defined role in a more set game plan? Adams is still a work in progress but he’s also young. There is no question, however, that he belongs with the senior team right now.

Everyone knows that Christian Pulisic can’t carry this team all by himself. In the years ahead, it looks like he won’t have to. That is great news. McKennie looks legit. Central defense is loaded with prospects. Adams is a project with a huge upside. More players must emerge to overhaul the player pool but there is a lot to like at the moment.

Sapong and Williams make a case

Youngsters stole the show but two players who are not exactly kids also made strong cases to be with the team. Danny Williams and C.J. Sapong will now leave Portugal having emerged as players who can help the team for awhile, even if they might be too old for Qatar in 2022.

Williams, 28, wore the captain’s armband and played as the lone No. 6 on the field. Overall he held up very well covering a ton of ground and playing well defensively to break up chances before they even got to central defense.

Sapong, 28, was very effective in his hold-up play while also showcasing his mobility when the game opened up. His assist to McKennie was smart play and he also had several moments where he was an asset to the attack. He deserves an extended look in January.

There are just not enough forwards in the U.S. player pool right now. Jozy Altidore is struggling, Jordan Morris is injured, Bobby Wood’s “lingering” knee problem must be of a concern, and Clint Dempsey turns 35 in March. Other young options like Josh Sargent and Tim Weah have yet to even play professionally. Sapong is not a bad option for now.

As tempting as it is, the U.S. cannot go with all very young players in the year ahead. There will need to be some players in their prime years contributing and not only for experience and leadership. There is a lot of important soccer to be played ahead of 2022 and veterans like Sapong and Williams can be useful.