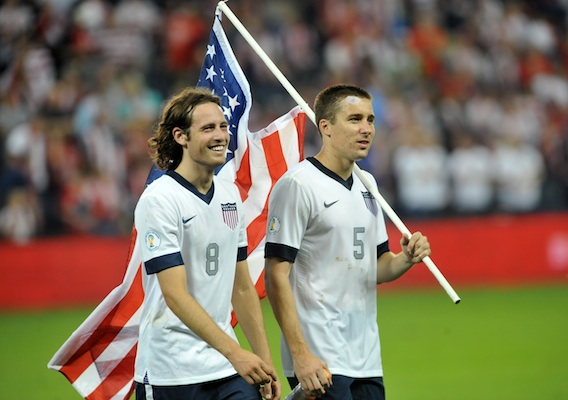 With the Hexagonal behind us and the World Cup Finals 230-plus days away, it's an ideal opportunity to check in with ASN contributor Brian Sciaretta and his predictions for the United States roster for Brazil.
BY Brian Sciaretta Posted
October 17, 2013
6:07 PM
THE OCTOBER INTERNATIONAL BREAK is now over and, believe it or not, just three games remain on FIFA international dates before the final World Cup camp assembles in May. In other words, there is not much time for Jurgen Klinsmann to experiment. The January camp will be interesting but that will likely be the final opportunity for the national team to give less experienced MLS players—or the Eric Lichajs of the world—a quick look. The U.S. won both of its games this past month but very few players made strong cases to be included. Brad Davis increased his stock the most after his terrific performance against Panama, but he is still on the outside looking in. If Klinsmann needs a left-footed option, it's possible that Davis moved ahead of Brek Shea and Jose Torres. The backline, however, is where most questions remain. The fullback position is populated with guys playing out of position. Brad Evans, Geoff Cameron, and DaMarcus Beasley are three players Klinsmann is attempting to groom into new positions, and the results have been decidedly mixed. Evans looked solid against Jamaica but struggled against Panama. Beasley continues to have good games, but questions remain about his ability at the position against top-flight competition. One thing that remains clear is that players in Klinsmann’s doghouse can climb out. Twelve months ago, Jozy Altidore was not called up to the national team despite scoring at will for his club side, AZ Alkmaar. This week he wore the captain's armband for the United States national team at the tender age of 23. The biggest battle on the team right now is in central midfield. Mix Diskerud, Kyle Beckerman, and Sacha Kljestan have all made good cases to be included, but there is likely only room for two. As a result, the competition is intense, and should continue to increase as we move into 2014. Given all of this, I am going to rank all the players with their likelihood of being selected. I’ll give the following four statuses: Lock: If healthy, this player is 100% going to Brazil.
Near Lock: It would take a surprising turn of events for this player to not go to Brazil.
Looks promising: This player in a battle for a roster spot but the odds are in his favor.
On the bubble: It can go either way at the moment.

4) Brad Evans: Looks promising
5) Geoff Cameron: Near Lock
6) Omar Gonzalez: Near Lock
7) Clarence Goodson: Looks Promising
8) Matt Besler: Near Lock
9) John Anthony Brooks: On the bubble
10) Edgar Castillo: On the bubble
11) DaMarcus Beasley: Looks Promising In the mix: Timothy Chandler, Steve Cherundolo, Carlos Bocanegra, Eric Lichaj, Michael Orozco, Tim Ream, Jonathan Spector, DeAndre Yedlin Analysis: The fullback position is wide open at the moment. Brad Evans is the first-choice right back but the Panama game showed what many suspected—that this is not his best position. If Steve Cherundolo returns from his most-recent surgery or if Timothy Chandler continues to hold his starting spot for FC Nurnberg, it becomes more difficult for Evans. In central defense, Besler, Gonzalez, Goodson, Cameron, and Brooks are the candidates but Cameron is playing right back for Stoke and is likely the backup right back for the U.S. Brooks is playing at a high level and can’t be ignored. Still, the 20-year-old Hertha Berlin defender could get bumped if Cameron moves into central defense for the Yanks. Left back remains an ongoing concern. Beasley and Castillo are more attacking wingers than left backs. Neither has a lock on the spot since it is still possible Klinsmann feels obligated to move Fabian Johnson to the back line.

12) Michael Bradley: Lock
13) Jermaine Jones: Near Lock
14) Kyle Beckerman: On the bubble
15) Mix Diskerud: On the bubble
16) Fabian Johnson: Lock
17) Alejandro Bedoya: Looks Promising
18) Graham Zusi: Near Lock
19) Clint Dempsey: Lock In the mix: Sacha Kljestan, Brek Shea, Jose Torres, Brad Davis, Joe Corona Analysis: At first glance this appears pretty obvious, but there are a lot of question marks. Beckerman and Diskerud are both on the bubble because if either falter, Kljestan is ready to take their place. Kljestan is a Champions League midfielder and did not hurt his cause in the October games, but Klinsmann does seem to favor other options ahead of the Anderlecht man. Jermaine Jones has always been one of Klinsmann’s favorites but he has surgery in his future and there are questions that go along with that. What will his recovery be? Will he get back into Schalke’s starting lineup when he returns? Finally, Klinsmann may also see the need to get a left-footed option onto the team to play on the wings. Right now, there isn’t a left footed player in the midfield. That could also threaten a guy like Diskerud or even Bedoya. The three left-footed options are Brad Davis, Brek Shea, and Jose Torres. Brad Davis played well recently and is likely within striking distance of making the trip to Brazil.

20) Jozy Altidore: Lock
21) Landon Donovan: Lock
22) Aron Johannsson: Looks Promising
23) Eddie Johnson: Looks Promising In the mix: Terrence Boyd , Herculez Gomez, Juan Agudelo, Chris Wondolowski Analysis: Jozy Altidore wore the captain's armband against Panama and while he didn’t score, his effort was fantastic. His season at Sunderland has been frustrating (and it most ways that isn’t his fault) but for the national team, he is still a presence that fits the team well. Landon Donovan can still help the team in many ways and has played forward, both wings, and the No. 10 role this year. There is no way he isn’t a big part of the team next summer. Eddie Johnson is not a complete forward but he is finding ways to score this year even when he isn’t at his best. He is absolutely dominant in the air and Klinsmann values that. If not for an injury, Klinsmann said Johnson would have started against Jamaica. Aron Johannsson has fit very nicely into the team since he joined in August. He is a natural goalscorer but he also has so many other valuable aspects to his game. He can pass very well and he makes dangerous runs that draw defenders and create space for others. He is a lethal attacker both in and outside the box. This doesn’t mean there aren’t tough cuts to make. Herculez Gomez has an uphill climb after missing many months this year with an injury. He will likely have to score a lot of goals this year for Tijuana to get back into the national team. Terrence Boyd also remains another difficult case since he has played well when given minutes for the national team. He is having a strong season with Rapid Vienna and will need to continue that run and maybe make a big move up in January to help his case. Boyd is better than the Austrian League. He may also be helped if Donovan moves into the midfield permanently and Klinsmann still needs four forwards. Four years ago Boyd would have made the U.S. team for the 2010 World Cup, but who does he replace on the current team? What do you think of Brian's picks? Share your thoughts—positive or negative—in the Comments section below. Brian Sciaretta is an American Soccer Now columnist and an ASN 100 panelist. Follow him on Twitter.