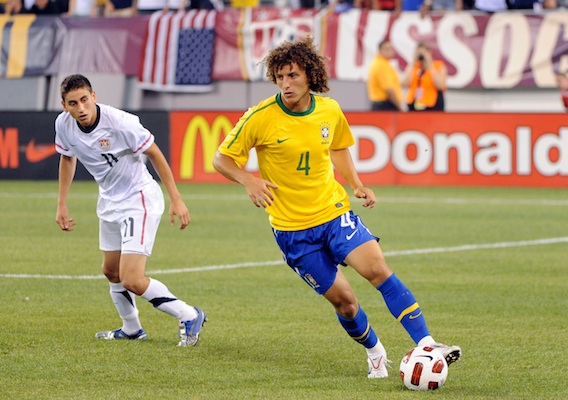 23 Names for Brazil: Brian Sciaretta Breaks It Down

Wondering who will make Jurgen Klinsmann's 23-man roster for the 2014 World Cup roster? ASN's Brian Sciaretta tells you who's in, who's out, and who is on the bubble.
BY Brian Sciaretta Posted
February 07, 2014
1:48 PM
IN 129 DAYS THE U.S. NATIONAL TEAM will march out onto the field at Arena das Dunas in Natal, Brazil, and square off against a Ghana team that has tormented them in the past two World Cups. It's a must-win match, by most accounts, as the Americans will face stiff tests against Portugal and Germany in their second and third group stage contests. The team needs to be ready for Ghana, and Jurgen Klinsmann needs to have the best-possible team available to him in Brazil. So who makes the cut? With only two friendlies left before the opening of the U.S's World Cup camp in May, players are trying to build their cases quickly to be on the 23-man roster going to Brazil. Some players are obviously safe bets but others are just one mistake away from missing out. In crafting the roster prediction below, I use the following categories: Lock: This player will absolutely be going to Brazil, barring injury.
Near Lock: It will take a very surprising turn of events for this player not to be on the World Cup team.
Most Likely: Pretty good bet that this player will head to Brazil but it wouldn’t be stunning if he was snubbed.
In a Battle: This player’s spot on the team is by no means safe and he is in a dogfight for his spot on the team. Having said all of that, here is my predicted U.S World Cup roster as of February 7, 2014.

1) Tim Howard—Everton (Lock)
2) Brad Guzan—Aston Villa (Lock)
3) Nick Rimando—Real Salt Lake (Lock) Notes: There is very little explanation needed for the goalkeeping position. Howard, Guzan, and Rimando are going to Brazil. Sean Johnson will be on standby if there is an injury. Any questions? No? Let's move on. In the picture: Sean Johnson, Bill Hamid

4) Fabian Johnson—Hoffenheim, (Lock)
5) Geoff Cameron—Stoke City (Lock)
6) Matt Besler—Sporting Kansas City (Near Lock)
7) Omar Gonzalez—Los Angeles Galaxy (Near Lock)
8) Clarence Goodson—San Jose Earthquakes (Most Likely)
9) DaMarcus Beasley—Puebla (Most Likely)
10) Timothy Chandler—FC Nurnberg (In a Battle)
11) Brad Evans—Seattle Sounders (In a Battle) Notes: Much has changed on the backline over the past year, with the injuries to Steve Cherundolo, the phasing out of Carlos Bocanegra, and the conversion of DaMarcus Beasley into a left back. In the final few months before the World Cup there is room for even more changes. In the right back spot, Timothy Chandler has been an international man of mystery, but Jurgen Klinsmann said on Wednesday that the Nuremberg defender remains an option. Klinsmann had gone on record stating that Chandler was left off the team for most of 2013 because of poor form but with the German-American being named to the Bundesliga Team of the Week by respected German publications for the first two weeks after the winter break, form does not appear to be an issue at the moment. Meanwhile, Geoff Cameron is thriving at right back in the Premier League even if his preferred position is in central defense. Klinsmann has played the Massachusetts native in both positions recently, and Cameron looked very good at right back in his last game against Austria. While it's not yet clear where Cameron will line up in Brazil, it's safe to say that he is the best American defender right now, and a surefire selection for the roster. Elsewhere in central defense, Gonzalez, Besler, and Goodson are all the safe picks. Left back, the U.S. national team's perennial Achilles heel, remains in flux. Fabian Johnson began his U.S. career in 2011 at left back. He then shifted to midfield. And then he lined up at right back (out of necessity) in his last game against Mexico. In the end, Johnson is the safe bet to return to left back for the World Cup since the midfield is crowded with talented options. If Klinsmann insists on keeping Johnson in the midfield, Parkhurst could make a late push and claim the backup left back spot behind Beasley. In the picture:
John Anthony Brooks, Steve Cherundolo, Michael Parkhurst, Eric Lichaj, Edgar Castillo, Tim Ream, Oguchi Onyewu, DeAndre Yedlin, Michael Orozco

12) Michael Bradley—Toronto FC (Lock)
13) Jermaine Jones—Besiktas (Lock)
14) Clint Dempsey—Seattle Sounders (Lock)
15) Landon Donovan—Los Angeles Galaxy (Lock)
16) Graham Zusi—Sporting Kansas City (Near Lock)
17) Alejandro Bedoya—FC Nantes (Most Likely)
18) Mix Diskerud—Rosenborg (Most Likely)
19) Kyle Beckerman—Real Salt Lake (Most Likely)
20) Brek Shea—Barnsley (In a Battle) Notes: Not many surprises are left in the midfield, with one notable exception—Brek Shea. Klinsmann will likely want a left-footed option on the bench and Shea, while inconsistent, is a unique player who can change a game when he is playing well. Brad Davis had the chance against South Korea but Klinsmann has always been fond of Shea. It was impossible to take Shea when he was not even making the bench at Stoke. But with him now playing on loan at Barnsley, he is in a far stronger position now. After moving to Reading last summer, Danny Williams has been a stalwart in the club’s push for promotion to the English Premier League. He is coming on strong now but it will be hard to pass Beckerman, who hasn’t been flashy but has been remarkably steady in the defensive midfield. Dempsey and Donovan are obvious locks to make the team but the question will be where Klinsmann plays both of them. Under Bob Bradley, the team played in a 4-4-2 with Dempsey and Donovan each playing outside midfield positions with Michael Bradley and Ricardo Clark in the middle. In Klinsmann 4-2-3-1 formation, Dempsey will likely play the central attacking role thereby forcing Donovan outside—most likely on the left, with Zusi or Bedoya on the right. In the picture: Danny Williams, Sacha Kljestan, Brad Davis, Jose Torres, Benny Feilhaber, Maurice Edu, Luis Gil, Joe Corona

21) Jozy Altidore—Sunderland (Lock)
22) Aron Johannsson—AZ Alkmaar (Near Lock)
23) Eddie Johnson—DC United (In a Battle) Notes: With each passing week there are more American forwards making a push for Brazil. Unfortunately, there are very few openings. In Klinsmann's preferred 4-2-3-1 formation, there is little need to take many strikers. Yes, late in the game Klinsmann does tend to shift to a 4-4-2 but that usually involves moving Dempsey or Donovan up top. With those two players capable of playing forward, the room on the team for pure forwards is even more limited. Jozy Altidore is a lock and, with the season he is having in the Eredivisie, Aron Johannsson is close. So that leaves room for one more. Eddie Johnson has that spot for now by virtue of his experiences in 2013 but he is far from a sure thing. Juan Agudelo’s move to Utrecht in the striker-friendly Eredivisie could be a game changer. In his first two games, Agudelo has scored a goal and picked up an assist against Ajax—a great sign for him. Also, Chris Wondolowski scored two goals against South Korea over the weekend, keeping his slim World Cup hopes alive. So the pressure is squarely on Johnson. For now the position is his but he is on thin ice. If he struggles out of the gate with DC United, Agudelo and Wondolowski both have a chance to supplant him. In the picture: Juan Agudelo, Chris Wondolowski, Terrence Boyd, Herculez Gomez, Mike Magee

Lock: 10 players
Near Lock: 4 Players
Most Likely: 5 Players
In a Battle: 4 Players

I will be creating another 23 Tickets column next month following the U.S. national team’s visit to Ukraine on March 5th. I'm sure the list at that point will look different from this version, so be sure to check it out. Meanwhile, share your thoughts below. And keep an eye out for ASN's 23 Tickets to Brazil interactive feature which will allow you to set your own roster for the 2014 World Cup. It's due later this month.