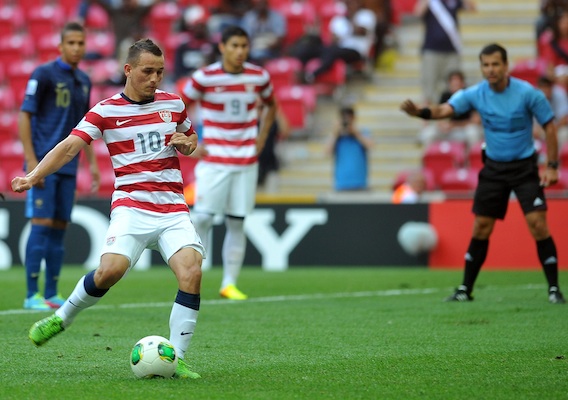 10 Uncapped Yanks Who Could Go to the World Cup

Are they longshots? Absolutely. Would we bet the ranch on them making the World Cup roster? Nope. But these 10 players could sneak into the 23-man squad that the United States plans to take to Brazil.
BY Daryl Grove Posted
July 02, 2013
1:33 PM
A YEAR IS A LONG TIME in international soccer. Think about it: 12 months ago, if we told you that the U.S. would be starting Brad Evans and DaMarcus Beasley at fullback, and that Matt Besler would be the U.S.’s best center-back, you probably would have laughed at us. So who knows what can happen between now and World Cup 2014? To that end, here are 10 players who currently have zero caps—nada—for the U.S., who could conceivably be sitting on a Brazil-bound plane next June as part of Klinsmann’s 23-man roster.

How does a 28-year-old midfielder with Magee’s scoring record have zero appearances for the U.S. national team? Is he secretly Canadian or something? Maybe the move to Chicago will shine a light on the man’s talents at just the right time. Bonus reason to take Magee: emergency goalie.

This pacy rascal can’t stop poaching goals in MLS. In fact, the only way to stop the 20-year-old hurting MLS defenses was to get him on the U.S. roster for the Gold Cup. Who knows how far he can go? Couple of goals against Belize and Cuba, and Jack Mac could be recreating Michael Owen’s 1998 goal next summer.

The six-foot-four German-American defender plays for Hertha Berlin and is still having trouble deciding which country to represent. But with Klinsmann not entirely convinced by anyone in central defense, maybe a spot in the Brazil-bound 23 will be enough to sway J.A.B. to the Stars & Stripes.

The Icelandic-American striker was born in Mobile, Alabama, but his family upped and moved to Reykjavic when he was three. He was called up to the full Iceland squad in October 2012, but pulled out with a groin injury—so his international allegiance is still up for grabs. Now Johansson has a choice to make. The exciting development is that Johansson recently joined AZ, so Jozy Altidore has a chance to not only form a strike partnership with Johansson, but also to persuade the six-foot-tall striker that his international future lies in the land of his birth. Because, seriously, which country is more likely to have a team in Brazil next year?

Alonso played 16 times for Cuba, his final game being in the 2007 Gold Cup before he defected. But he’s been a U.S. citizen since 2012, and a standout performer in Seattle’s midfield since 2009. Alsono’s aggressive style could see him form a scary shaven-headed midfield partnership with Michael Bradley. What's more, Klinsmann has openly said he’d love to give Alonso a chance. The sticking point is Cuba, which is apparently refusing to sanction Alonso’s switch. For now....

Klinsmann loves an overlapping fullback, and the 22-year-old Houston right back can barely contain his passion for going past the halfway line. With Steve Cherundolo and Timmy Chandler dealing with injuries and Brad Evans having a shaky grip on the #2 jersey, Sarkodie could still make a late run—so to speak—for the spot. Or at least a backup spot.

Take everything said about Sarkodie above and replace the word “right back” with “left back.” Next, replace the name “Brad Evans” with “DaMarcus Beasley.” Then mix in the fact that Sarkodie’s fellow Dynamo is actually on the Gold Cup roster and it all looks very possible.

If Sarkodie can’t make a claim on that right-back spot, then New England’s Farrell may be the guy we’re looking for. The 2013 SuperDraft No.1 pick plays right back with just the right mix of speed, strength, and technique. Plus, he has more than enough confidence to go past his man, wherever they are on the field. He’s only 21 and has yet to appear for any of the U.S. junior teams, but he’s already caught the eye in MLS this season.

The 19-year-old Real Salt Lake player has touch and technique to spare, evidenced by his turn-and-golazo finish against Spain at the U-20 World Cup. It was a rare bright spot for the U.S. team, and it was very bright. Gil may just be the #10 U.S. Soccer has been waiting for, so there are worse ways of using your 23rd World Cup roster spot.

Ask any D.C. United fan if Pontius should play for the national team and you’ll get an over-excited “YES!” that borders on aggressive. He can play wide left or behind the striker, and has been in two training camps without ever making the field. Pontius is out-of-form right now, as are all of his teammates, but when that turns around toward the end of the season, expect the “Pick Pontius” calls to get loud again.

DeAndre Yedlin could both provide a wacky-haired alternative to Sarkodie at right back. While youngsters like Jose Villarreal, Daniel Cuevas, and Joseph Gyau could all provide options on the right wing if they can get some regular playing time with their respective clubs. And what about George John? He can be dominant, so why shouldn't he be in the consideration set, especially with the two youngsters playing in central defense? OK, we know this is highly speculative and perhaps even a bit crazy. But what do you think? Is there anybody on this list you would love to see in Brazil? Is there another cap-less soul who belongs in here? Share your thoughts below.