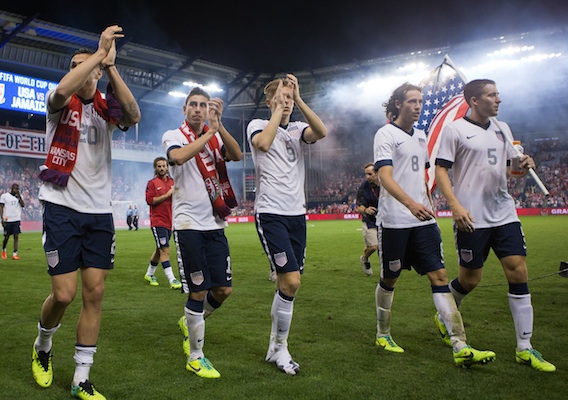 Every 60 days we update our ASN 100 ranking of U.S. soccer players. We also track players' trajectories over time, and these 10 players—including some vets—made huge strides over the last 12 months.
BY John Godfrey Posted
December 29, 2013
11:37 AM
WE ADDED THIS NEW WRINKLE to our ASN 100 feature a few months back—the ASN 100 Ranking Tracker. It's a visual representation of each players' ranking over time and it provides an instant player evaluation. Is Player X's stock rising like Twitter or crashing like Blockbuster Video? Check it out—you can see for yourself. Given the eventful nature of 2013—23 international matches, the Gold Cup, the Hexagonal—we thought it would be fun to see which players in the United States player pool raised their profiles the most over the calendar year. Here's a quick look at 10 players with the right kind trajectory.

Aron Johannsson started the year in 59th position on the ASN 100—a reasonable number considering he was a relatively unknown player toiling in the Danish first division—a striker who had not yet decided whether to represent Iceland or the United States on an international level. His transfer to AZ Alkmaar opened many eyes, including Jurgen Klinsmann's, and the Icelandic-American skyrocketed up the ASN 100. Now ranked 11th, that number looks likely to rise in the months ahead.

Whereas Johannsson won plaudits based primarily on his club play, Mix Diskerud did most of his best work wearing the stars and stripes. As you can see from the chart above, the Norwegian-American was actually trending downward earlier this year—no doubt as a result of playing in the so-so Norwegian first division. That said, Diskerud joined the U.S. for the Gold Cup over the summer and made a very strong impression. All told, he logged 714 minutes across 13 games for the United States in 2013, and the oh-so-cool midfielder's future is bright.

A year ago, nobody knew if Matt Besler was an international-caliber defender. Today, Besler is Klinsmann's undisputed first-choice central defender. Who will start alongside Besler in Brazil—Omar Gonzalez? Clarence Goodson? Geoff Cameron? Hard to say, but Besler is a no-brainer in the heart of the defense.

Does DaMarcus Beasley represent the past, the present, or the future of the United States national team? Hard to say, but when he was called in to captain the 2013 Gold Cup team and deputize at left back in World Cup qualifying, he did a capable job. Beasley began the year ranked No. 56; he is presently holding strong in the 16th slot.

John Brooks moved up 48 slots in 2013, which is no doubt the result of his 1) decision to play for the United States instead of Germany and 2) holding down a job as a central defender in the Bundesliga. Is he a bit overrated right now? Perhaps. But there's no disputing that the 20-year-old German-American has a very high ceiling.

Do Klinsmann's roster choices influence the ASN 100? You better believe it. Consider Brad Evans, an above-average MLS midfielder who was given an amazing opportunity to play right back for the United States in 2013. Last January, Evans was No. 65 on the ASN 100; now he is all the way up at No. 26. Evans has been uneven at right back for the Yanks, but his dramatic game-winning goal against Jamaica raised his profile, and Klinsmann's insistence that Evans is his guy will likely keep Evans in the upper ranks of the ASN 100 for the foreseeable future.

Alejandro Bedoya couldn't catch a break at the club level...until he switched to Nantes in France's Ligue 1. Unable to crack the starting XI at Rangers in the Scottish Premier League and clearly playing below his level at Helsingsborg in Sweden, Bedoya found the perfect fit in France. Equally important, the lively midfielder took advantage of his opportunity to play in the 2013 Gold Cup, and now seems likely to make Klinsmann's 23-man World Cup roster.

When the Los Angeles Galaxy traded Mike Magee to the Chicago Fire for Robbie Rogers, it was quite the feel-good story for MLS. Rogers, who returned to soccer after announcing he was gay earlier in the year, came home to his native Los Angeles, while Magee, A Chicagoan, also returned to his roots. Everybody wins, right? Uh, not exactly. While Rogers struggled to make the Galaxy lineup, Magee demonstrated something Los Angeles fans already knew: He is an excellent soccer player. No longer lost in the shadows of David Beckham, Robbie Keane, or Landon Donovan, Magee showed his true worth in 2013 and was named league MVP. A January U.S. national team call-up seems likely for the most talented uncapped American.

Is Amobi Okugo a defender or a midfielder? It's not entirely clear. If the former, the Philadelphia Union stalwart is already nipping at the heels of the current cadre of Americans on the national team. If Okugo is a defensive-minded central midfielder, the two guys ahead of him on the depth chart—Jermaine Jones and Kyle Beckerman—are both on the far side of 30. The 22-year-old California native may not have sufficient time to break into the 2014 World Cup roster—barring injuries, that is—but he looks primed for 2018, 2022, and beyond.

Kelyn Rowe showed sporadic bursts of talent in his 2012 rookie campaign, but he truly blossomed during his sophomore season. A central figure in the Revs' youth movement, Rowe, 22, scored 7 goals and logged 8 assists in 33 games played. He has the skill, the vision, and the tenacity to succeed on the international level, and that's why Rowe moved up 47 slots in the ASN 100 since July. OK, now it's your turn. Share your thoughts on these ascendant players in the Comments section below.