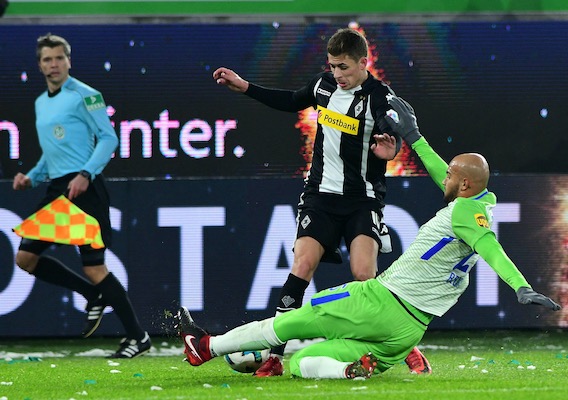 10 things to watch this weekend: DCU vs Red Bulls, Brooks vs. Hertha, & much more

The international window is over and that means more games, more storylines, and more players to follow in American soccer. This weekend should be a good one, even with the likely absences of Christian Pulisic and Weston McKennie. ASN's Brian Sciaretta has your guide of what to watch
BY Brian Sciaretta Posted
September 14, 2018
3:00 AM
THE INTERNATIONAL break is now over and the focus will return to club soccer. For a lot of U.S. national team players, there are important games this weekend.

Of course, two of the most popular and known American players in Christian Pulisic and Weston McKennie are questionable due to injury but for other high-profile players and other players on the fringe of the U.S. national team, there is opportunity this weekend to help their clubs in important games and help build their case in important games.

Both domestically and abroad, there is a lot to watch this weekend. Here are 10 things I am watching this weekend.


John Brooks is a product Hertha Berlin. He grew up in its youth academy an eventually signed a first team contract with the club. He worked his way up to the first team when it was in the 2.Bundesliga and led the team to promotion. Eventually he was sold to Wolfsburg in 2017 for a $20 million transfer fee – the largest fee every produced for an American player.

On Saturday (9:30am EST) Brooks will face off against his former club when Hertha visits Wolfsburg. What makes this matchup even more compelling is that both Wolfsburg and Hertha have a perfect six points through two games.

Brooks has been in fine form for Wolfsburg and left USMNT camp early to prepare for this game.


On Sunday (1pm EST) DC United will hosts the Red Bulls in the best game of the weekend in MLS, by far.

In the standings, both teams have a ton to play for. If DC United wins, it will be in the playoff positions – something that was unthinkable before Wayne Rooney arrived. If the Red Bulls win, the club will still hold the top position in the race for the Supporters Shield (albeit having played one more game than Atlanta).

From an American standpoint, this game is a no-brainer. The Red Bulls will start current national teamers Tyler Adams and Tim Parker along with Aron Long who just came off his first USMNT callup. Meanwhile, DC United will start U.S. national teamers Paul Arriola, Bil Hamid, and rising star and former U.S. U-20 captain Russell Canouse who quickly putting himself in position for a USMNT callup.

This will be a good one.


DeAndre Yedlin only played limited minutes against Mexico so he should be well rested for a big game on Saturday (10am ET) when Newcastle hosts Arsenal.

While it looked serious, Yedlin avoided a catastrophic injury last month and made a quick return for matchups against some of the biggest clubs in the world in Manchester City and Chelsea. While Newcastle lost both games 2-1, Yedlin played well.

Newcastle’s brutal schedule to start the season continues against Arsenal which lost its first two games of the season (also to Chelsea and Manchester City) but has won its last two.


After a wild international break, Matt Miazga returned to France and should start for Nantes when it hosts Stade de Reims on Sunday (9am ET).

The United States – Mexico rivalry has had many iconic moments and Miazga’s mocking of Diego Lainez’s height during an altercation will be shown ahead of all future U.S.-Mexico games for the foreseeable future. While a lot has been made of Miazga’s gesture, it brought life to a U.S. team that needed it.

Now Miazga, 23, will return to Nantes with his team needing points after having just four points from four games in Ligue 1.

But this game should signal desperation from both teams as NAC Breda sit in second to last place with three points from four games and Fortuna Sittard are in dead last with just two points in four games.

Novakovich was an unused substitute in both U.S. games over the break and should be rested. He scored in his last game before the break to help his club to a draw. It will be interesting to also see if Palmer-Brown used the international break to improve his standing at NAC to earn minutes.

But will a potential relegation battle bring about desperation? Will both Palmer-Brown and Novakovich rise to the occasion to boost their stock as fringe national team players?

6) Holmes to debut for Derby?


Duane Holmes, 23, could be nearing his league debut for Derby. After notching two assists in a league cup, Holmes looks to finally be returned from injury and ready to go for a Derby County team that should be a promotional hunt this season.

The international break came a good time for Holmes who probably needed the time to build a case to Frank Lampard that he should be part of a team that has won three in a row without him.

Holmes has a lot of attacking talent and a big opportunity at one of the Championship’s better clubs. It would be an impressive feat if he can contribute there.


There are going to be a lot of talking points when FC Dallas hosts Columbus on Saturday night (8pm EST).

In one of the black marks on the league, the Crew will be visiting a state where it could be relocating to in the near future. The move is deeply unpopular throughout most of the league as Columbus was one of the founding teams in the league and it build the first ever soccer-specific stadium which marked a clear turning point in MLS. It was also the home to popular national team players like Brad Friedel, Brian McBride, and Frankie Hedjuk.

There are talks that an Austin FC supporters group is going to be traveling to Dallas to watch the game. How will the FC Dallas supporters respond as Dallas too is one of the league’s original teams.

FC Dallas holds the first place spot in the Western Conference but has been uneven at times. Meanwhile, Columbus is coming off a nice 2-1 win over New York City and is in fourth place in a much stronger Eastern Conference. A lot will be on the line in the standings.

Gregg Berhalter, meanwhile, could be on the shortlist to get an offer to coach the LA Galaxy and the U.S. national team in the off season. A veteran of the 2002 U.S. World Cup team, Berhalter has done a lot this season with a much smaller budget than other teams. He has been helped by U.S. internationals Zack Steffen, Wil Trapp, and Gyasi Zardes.

Also from an American perspective, FC Dallas right back Reggie Cannon has had a breakout season and could be building a case for a USMNT callup as the backup to DeAndre Yedlin.

8) Amon set for matchup vs. Randers


In the Danish Superliga, Nordsjaelland will host Randers on Saturday (10am) and American winger Jonathan Amon should be finally ready to take a bigger role with FCN now that his is healthy and has had the international break to train.

Amon, 19, is a very exciting winger with how he uses his speed in 1v1 situations to take on defenders. He is still very much a work-in-progress to round out his game but he has a great upside.

He could be pushing for a U.S. national team call-up but it is worth following him as a likely key member of the U.S. U-20 team as Tab Ramos said he really wants to get him involved soon.

U-20 World Cup qualifying will take place from November 1-21 in Florida. The second stage of that tournament takes place inside the international window and the rumors are that the roster allow teams who qualify for that stage to expand their roster to incorporate players for these games. Amon seems like a strong candidate for this role.


Antonee Robinson, 21, had a strong game off the bench against Mexico where he delivered the winning assists for the U.S. national team on Tyler Adams’ goal. On Saturday (10am ET), he and Wigan will visit a good Brentford team that is in fifth place in the Championship.

As the number one left back for the U.S. team, Robinson has enjoyed a meteoric rise for club and country the past year. The game against Mexico was another big step. Now back with Wigan, he will need to continue to build a case to his parent club, Everton, that he is ready for the Premier League.


Lynden Gooch did not make the most recent U.S. national team roster but instead stayed with Sunderland as League One plays through the international window.

Gooch has been affiliated with Sunderland for over a decade and is trying to get the club promoted. Through the start of the season, it currently sits in fourth place. Gooch has done well to start this season playing a new position of right-wing back where he has been able to effectively push forward into the attack.

But this season is important for Gooch on many levels. Can he help get Sunderland promoted? Can he play well enough to justify a transfer to a better league if Sunderland do not go up? Can he produce big numbers to justify a USMNT call-up out of League One?