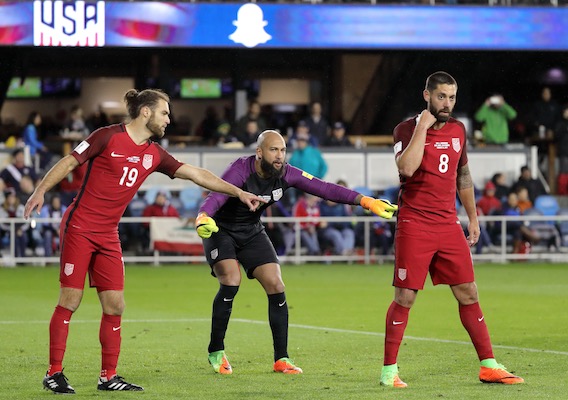 10 National Team Players Who Need to Hang 'Em Up

The end of a World Cup cycle always brings international retirements—voluntary and involuntary. While some of the players listed below might have been eyeing a 2018 departure, we think the time is now.
BY Franco Panizo Posted
October 12, 2017
2:00 PM

OUT WITH THE OLD. In with the new.

That is the approach the U.S. men’s national team needs to, and probably will, adopt following Tuesday’s humiliating development.

A grim reality consequence of Tuesday night’s epic World Cup Qualifying failure is that the U.S. will not have another significant game for two years. The 2019 CONCACAF Gold Cup will represent the Americans’ first chance to play in a competitive match, meaning the current core players will be even further removed from their prime years.

While it is clear that at least some change is on the horizon, it is still too early to know who will lead the program into the next cycle. U.S. head coach Bruce Arena was always a stopgap solution and he should absolutely be done after this loss, but who comes in to replace him is a topic that will be discussed until U.S. Soccer makes it official.

Regardless, the U.S. needs an injection of young, fresh talent. There is some potential and promise in the pipeline, but veterans will need to be removed from the picture in order to give the next wave of players a chance to see the field, make mistakes, learn, and grow in order to try and prevent this debacle from happening again in four years.

One player who will likely remain in the plans is captain Michael Bradley, who is 30 now but still good enough to be on the roster while the team transitions to a new generation. That is not to say that Bradley should continue to be an unquestioned starter—he should not be unless his form drastically picks up, which will get tougher with each passing year—but he should still be in consideration given his experience, locker room leadership, and occasional ability to step up.

Bradley might be a player who should stick around a little while longer, but here is a closer look at U.S. regulars whose international careers should be over.

The positional switch that saw him drop from the right side of midfield to right back this year prolonged his national team career, but he only proved serviceable in defense against CONCACAF opposition. Zusi is 31 now, and already declining in terms of his athletic ability. Combine that with his average defensive skills, which understandably are still a work in progress, and there just is no need for him to be around any longer. The improving DeAndre Yedlin and 27-year-old Timothy Chandler, if he stills cares to play for the U.S., should get all the looks going forward.

The long-time U.S. starter has been a shell of his former self over the past two years, but that is to be expected when you are an aging goalkeeper who relied on his athleticism as much as his smarts. Howard is 38 now and has shown in recent outings, including in that gut-wrenching 2-0 home defeat to Costa Rica last month, that he no longer boasts the traits that made him so special.

His positioning and decision-making have been poor, both for the U.S. and the Colorado Rapids, and that is as clear a sign as any that is time to move on from the Howard era in goal.

Like Howard, Dempsey has long been an exceptional servant for the United States. Father Time is undefeated, however, and the inventive forward has slowed down considerably since the Copa America Centenario. The fact that he remains one of the biggest scoring threats for the U.S. at the age of 34 is both a testament to his play and the team’s lack of developed youngsters, but in recent months his role was diminished in favor of younger and more energetic players. Dempsey may still want to make the U.S.’s all-time scoring record solely his, but he has had his chances and now needs to make way for Haji Wright, Joshua Perez, and the next crop of attackers.

Another long-time representative of the U.S., the 35-year-old Beasley has pieced together an incredible international career. He should have been done after the last World Cup, but a lack of fullback options kept forcing head coaches to bring him back into the fold. While he normally could do the job more often than not against CONCACAF opposition, we started to see struggles in recent appearances. His contributions in the attacking end also started to wane, which is why the very average Jorge Villafaña became Arena’s starter at the end of this cycle. Beasley, like Howard and Dempsey, will go down as a U.S. legend, but the sand in his hourglass has long run out.

Johnson’s inclusion here might be surprising to some fans and observers given that he is only 29 and was not called in for this last camp, but he was recently quoted as saying that he was considering retiring from international soccer after the 2018 World Cup. What’s more is that it is still unclear how committed he is to the U.S. cause. Yes, he is one of the more talented players in the pool and shone brightly in Brazil four summers ago, but he looked disinterested and failed to leave an impact in the majority of his more recent outings.

Klinsmann: I had "severe word" with Fabian Johnson over Mexico game exit, sent him home. Wants him to rethink approach to the US team.

Let’s also not forget that he was sent home in 2015 when Jurgen Klinsmann questioned Johnson’s dedication to the team. The versatile veteran might still be in the upper echelon of quality players in the pool, but the U.S. is better suited to call in individuals that are full dedicated to its cause.

It is true that Cameron did not have a chance to try and change the U.S.’ fortunes this past week, but the fact remains that he is 32 and there are younger centerback options like Matt Miazga, Cameron Carter-Vickers, and Erik Palmer-Brown waiting in line for their opportunities. Cameron delivered more often than not since the 2014 World Cup—that loss in Costa Rica was a major exception—but there is no need to have him take up minutes that can be given to prospects who need seasoning. Yes, Cameron is still a good player competing in the English Premier League and he deserves a better finish to his international playing days, but it is not always about what one deserves.

While Gonzalez is notably younger than Cameron and could help provide experience to youngsters at the start of the next cycle, the 29-year-old defender is likely only going to slow down over the next few years. Already not a fleet-footed centerback, that spells trouble for both the U.S. and Gonzalez. Tuesday’s own goal will haunt Gonzalez the rest of his career, especially if it marks the final chapter to his international playing days.

It's an own goal for Omar Gonzalez ????#USMNT #TRIvsUSA pic.twitter.com/MnJf4hxEIF

There is no need, however, to continue to give the error-prone vet looks when youngsters like the aforementioned trio will benefit from getting substantial minutes in the slew of upcoming friendlies likely to be scheduled in 2018.

One more centerback on this list, Besler has lost a step from where he was at the start of this cycle. The 30-year-old has not necessarily struggled on the field, but again there are younger options to test at his position and he will be well past his prime the next time the U.S. has games of real significance. It is true that the next head coach might want a veteran central defender to help with the transition, but the likes of Matt Hedges or Steve Birnbaum could just as easily aid in that process.

He might be just three months older than captain Michael Bradley, but Bedoya’s place in the U.S. midfield was already decreasing due to the introduction of the likes of Darlington Nagbe, Kellyn Acosta, and Paul Arriola. Bedoya was always a blue-collar contributor who gave his all and put the team first, but rarely was he a difference-maker.

Alejandro Bedoya on the #USMNT failing to make the World Cup. pic.twitter.com/5tY92vfbCY

Given that his motor is likely to go in the coming years, it is best to move on from Bedoya and onto other options in the pool—such as Weston McKennie and Tyler Adams—who are more likely to be around come 2022.

The 34-year-old striker’s national-team career should have ended after that horrific miss against Belgium in 2014. He did nothing but score in two friendlies since then despite doing well in MLS, which only further highlighted the point that he was never really of international quality.