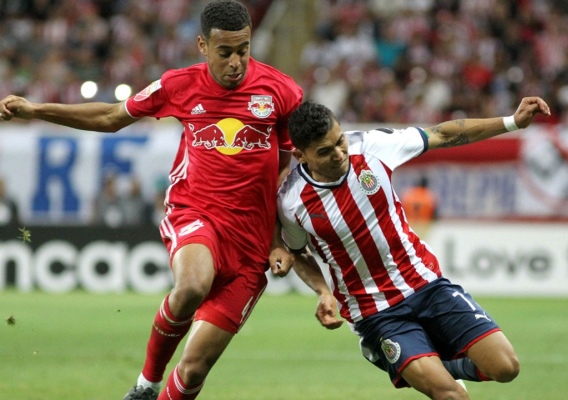 There is a lot for American fans to watch this weekend in the final slate of games before the international window. ASN's Brian Sciaretta is here to give you his weekly top 10 viewing guide.
BY Brian Sciaretta Posted
August 31, 2018
9:00 AM
This long weekend is going be a lot of fun for American fans. In addition to the U.S. national team roster being released on Sunday, there are a lot of interesting games taking place both domestically, in South America, and in Europe.

As ASN does every Friday, here are 10 things to watch this weekend.


Games rarely come any harder than they will for DeAndre Yedlin and Newcastle United on Saturday (12:30pm EST). Last weekend Yedlin returned from injury and will be remembered for the unfortunate own-goal that forced the 2-1 loss to Chelsea at the end. What will be forgotten, unfortunately, is that Yedlin played well over the course of the entire game and even had an equalizing assist.


Manchester City will be a very difficult opponent but one that will provide a good measuring stick for Yedlin who will try play a strong game against a difficult opponent for the second straight week. If he does, he could be carrying a wave of momentum heading into national team camp in New Jersey.


On Sunday (7:30pm EST), DC United will host Atlanta United in a game that is crucial for DC United and important for Atlanta.

A week ago, it appeared as if DC United was certain to eventually reach the playoff positions after winning three in a row and riding a wave of momentum from Wayne Rooney. But these past seven days have been a disaster for DC United which lost to the rival New York Red Bulls last week and then to Philadelphia at home on Wednesday. In both games, the team was shut out. A third straight loss could be the nail the coffin.

For Atlanta, it is firmly in a race for the Supporters Shield with the New York Red Bulls. While the Red Bulls over took Atlanta midweek, Atlanta has one game in hand. A loss in this game could give the Red Bulls a real chance to separate itself from the pack.

This is the most interesting game in MLS this weekend.


The New York Red Bulls will conclude a very difficult five games in 15 day stretch on Saturday night (7:30pm EST). The team is doing very well under new manager Chris Armas and has four wins and two draws in its last six.

The 1-0 win over Houston on Wednesday was important in that the team got the result while resting many key players – so it should be refreshed heading into the game against Montreal. The Red Bulls are now in an even race with Atlanta for the Supporters Shield and the September 30 matchup between the two teams in New Jersey will be one of the most important matches of the regular season.

One player who has not rested is Tyler Adams who has played the full 90 minutes over the crowded stretch and the win over Houston came in the extreme heat. Adams might be due for a rest but if he starts and the Red Bulls win, it will be an important indication to just how impressive his engine is. The downside, however, would be that he will surely be exhausted at the start of the national tem camp.

Also of note for the Red Bulls is the all-American central defense tandem of Aaron Long and Tim Parker who both could receive call-ups to the U.S. team next week. Parker impressed with the U.S. team in June in his first two caps. For Long, however, a call-up would be his first and he is continuing to build a case for defender of the year.


In the Championship, two American players could make their respective club debuts.

Cameron Carter-Vickers, 20, recently joined Swansea City on loan from Tottenham and should feature in a promotional race this year. Carter-Vickers played well in the Championship last year for Sheffield United and Ipswich Town but the expectations at Swansea will be a completely different level.

Meanwhile, Duane Holmes recently joined Derby County on a transfer from Scunthorpe United in League One where he was the team’s player of the season last year. He arrived at Derby County earlier in the month injured but made his debut midweek in a 4-0 League Cup win over Hull City where he came off the bench and picked up an assist. Like Carter-Vickers, Holmes could feature in a promotional race while playing for Frank Lampard’s new side.


Antonee Robinson, 20, has been one of the most surprising success stories for Americans abroad the past year. Last year he was instrumental for Bolton in avoiding relegation out of the Championship. This season on another loan from Everton, he is off to a very strong start at Wigan Athletic where his speed out of the left back position is eye-opening for his club’s supporters.

The English-born Robinson will aim to continue that success on Saturday (10am EST) when Wigan hosts Rotherham United.


Bobby Wood was not able to play for Hannover in its Bundesliga opener last week as he served a suspension from the final game of last season with Hamburg. Hannover ended up playing to a 1-1 draw with Werder Bremen.

It will be a tougher assignment for Wood and Hannover on Friday (2:45pm EST) when Hannover hosts a Borussia Dortmund team that will be without Christian Pulisic who picked up a knock midweek.

Last year was tough for Wood, 25, and if anyone needs a strong start to the season for a boost of confidence, it’s Wood.


Defending champs Toronto FC are trying to find any sort of momentum to build a playoff run in what has been a very disappointing season. Greg Vanney’s team is six points out of the final spot and has also played one more game.

Los Angeles FC meanwhile has had a great inaugural season and sits in third place of the Western Conference. Bob Bradley will be in the running for coach of the year and will face his son, Michael Bradley on Toronto, this Saturday. This week the elder Bradley pointed out that stopping Michael is a key point in his gameplan.

“As we prepare to play against Toronto, like we would any other team, you try to understand what the team is all about,” Bob Bradley said of his son. “A lot of what happens in Toronto begins with his ability to navigate his team, give his team rhythm, control the game..You probably have to try and make it hard for him.”


Many of the teams in the Danish Superliga play young players in hopes of selling them for profit. Hobro’s Emmanuel Sabbi and Nordsjaelland’s Jonathan Amon are two candidates.

Jonathan Amon, 19, has had a strong start to the Danish season after returning from injury. What will be interesting for Amon is that the word is now out in Denmark about Amon’s speed and eagerness to take defenders on in 1v1 situations. Opposing teams are starting to adjust. How will the South Carolina winger respond.

Emmanuel Sabbi is also playing well for Hobro where he has been the lone bright spot on an otherwise bad time stuck in last place. He has scored four goals on the season using a combination of skill and elite athleticism. But on a team that is struggling like Hobro, how many chances will he really get?


Brendan Hines-Ike, 23, has made a positive transfer after joining Kortrijk on a club-record transfer fee this summer. Last weekend, he was named the man of the match in a 2-0 win over Sporting Charleroi where he picked up an assist in the opening goal.

But on Sunday (2pm EST), Kortrijk hosts a Genk team that sits atop the table after the first five games of the season. Genk has scored 13 goals so far which is second in the Belgian league in scoring. It will be a big test for the Colorado native to help keep Genk off the board and give Kortrijk a chance at the upset.

Professional debuts rarely come much better than it did for Joel Sonora, 21, who came off the bench last week for Talleres Córdoba and assisted for the final goal of a 2-0 win over Gimnasia in Argentina’s Primera.

On Saturday (4:15pm ET) the 2015 United States U-20 midfielder will have a much tougher test when Talleres Córdoba hosts Godoy Cruz which has seven points through the first three games of the Primera. Sonora might not be a starter at this point but he likely has earned another chance to be one of the first options off the bench.

Another big performance would be a strong indication he is continuing to develop nicely since returning to his home in Argentina after a tough spell in Germany with VfB Stuttgart.