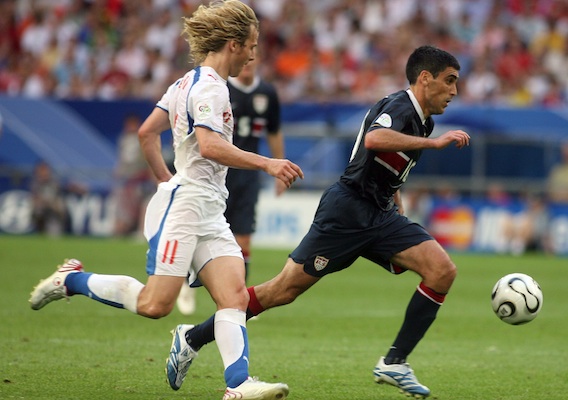 In the last of three tactical Q&As, ASN’s Liviu Bird answers questions about whether the U.S. has ever produced a world-class player and non-traditional formations in world soccer.
BY Liviu Bird Posted
December 19, 2013
1:53 PM
WE HOPE YOU’VE ENJOYED talking tactics with American Soccer Now in 2013. The new year promises more discussion points and more opportunities for the site’s resident tactical analyst to (we hope) entertain and educate our readers on some of the more subtle nuances of the world’s greatest game. If you missed them or want to read them again, check out Part 1 and Part 2 of this #AskASN Q&A series. Let’s wrap it up with three more questions posed by our community of ravenous soccer content consumers.

This wasn’t a direct response to calls for Q&A submissions, but the conversation that ensued was just too good to pass up:

@liviubird You think Bradley is too limited (or too old at this point) to become "world class"? Any US player who could, at whatever age?

Michael Bradley is the closest to world-class that an American player has reached in recent times. Before his ankle injury, he was on a rapid ascent that he has yet to regain in his short time back. However, he is not a world-class player — a world-class player is one that would have regained his spot in AS Roma’s starting lineup right away because he is too good to leave out. Manager Rudi Garcia has been somewhat fickle when it comes to playing Bradley in general, and competing directly with a born-and-bred Roman in Daniele De Rossi hasn’t helped his cause. As a result, Bradley has played higher in midfield, which isn’t his best position. Watching Bradley in person makes it much easier to appreciate his soccer IQ and ability. He is always in position to receive the ball, always looking for the open passing lanes, and his high pass completion in all situations makes him one of the best American central midfielders to play the game. Among all matches in 2013, he has averaged about 90 percent passing accuracy.

However, he is not quite in the same class as Sergio Busquets (the best current holding midfielder in the world) or Philip Lahm (a player Pep Guardiola converted into a No. 6 and called the smartest player he has ever coached). Others in the American pool have come close at one point or another, including Clint Dempsey and Landon Donovan, but to be considered world-class, they should be in the top five to 10 in the world at their positions — and they’re not. American goalkeepers are another story. Kasey Keller, Brad Friedel, and Tim Howard have all been world-class. Had he ever gained a foothold in Europe, Tony Meola could have also been in the conversation. However, Americans have an advantage in a position where athleticism is the most valued characteristic. As long as the definition of an “American” player is looser than simply one who wore the United States kit in competition, others work their way into the conversation. Fiorentina striker Giuseppe Rossi has scored 15 goals in 20 appearances this season. Bayern Munich wunderkind Julian Green made his Champions League debut at age 18, albeit for just two minutes in a game already well in hand. In the last generation, Claudio Reyna had several successful years with Rangers after starting his career in the Bundesliga. The U.S. captain was also named to the 2002 FIFA World Cup All-Star Team, when it was chosen by a FIFA technical study group and not fans in an online popularity contest. Others on that team included the original Ronaldo, Miroslav Klose, Michael Ballack, Roberto Carlos, and Oliver Kahn. It’s hard to quantify Reyna’s contributions to the game because the prime of his career was well before the recent boom in analytics, but he and Bradley are as close as the U.S. has come to producing a world-class field player — and Reyna might have gotten there if he hadn’t been consistently injured during his career.

Huan Nguyen asked about an interesting tactical trend in the English Premier League:

#AskASN do you see teams like #Lfc attempt at a 3-5-2 as a viable option or is it too vulnerable defensively?

Liverpool isn’t the only Premier League club to have explored a three-back system this year. Steve Bruce’s Hull City moved to a 3-5-2 for the last two matches and found draws at Swansea and against Stoke. However, Brendan Rodgers’ experiment with the formation seems to have ended. After losing 1-0 to Southampton on Sept. 21 in a 4-2-3-1, Liverpool moved to a 3-4-3/3-5-2 hybrid against Sunderland eight days later, winning 3-1. After that, it was on and off for five matches until Rodgers got tired of switching to four backs at halftime after poor starts. In particular, a 2-0 loss to Arsenal on Nov. 2 could be somewhat attributed to the formation. The Gunners exploited the flanks, particularly on the right side through Tomas Rosicky and Mesut Ozil drifting wide. Liverpool’s wingbacks were not effective enough, leaving the three center backs exposed and stretched.

This diagram shows one of the big potential problems with the 3-5-2: no wide support on defense in counterattacking situations. Wingbacks have longer recoveries if they advance to provide attacking support, leaving the center backs to cover wide areas. If the other two center backs don’t support properly, it opens gaps in the back. Wingers have an easier time finding one-on-one isolation, as wingbacks, defensive midfielders, and center backs scramble to get numbers behind the ball. All that movement makes combination play easier, especially if the opponent can keep the ball moving quickly and vertically. However, it’s not necessarily the 3-5-2 itself that makes a poor defense. With the right personnel and tactics within the formation, it can be an effective framework on both sides of the ball. As usual, a formation is not a style of play, and it can’t be defined that simply.

Sticking with the theme of alternative formations, Steve Graff had a couple of questions about how the U.S. lineup could look in a couple different scenarios:

It’s fun to indulge in hypotheticals every now and then. However, a 3-5-2 with the U.S.’s current strength in the back would be a recipe for disaster. The formation puts a lot of strain on center backs to stay solid (Jurgen Klinsmann’s are prone to bonehead moments) and wingbacks to cover a lot of ground on both sides of the ball (DaMarcus Beasley, Steve Cherundolo, Timmy Chandler, and Brad Evans aren’t that mobile). As for the 4-2-2-2 — or as it’s also known, a 4-4-2 with a diamond midfield — that probably won’t happen unless Jason Kreis takes over the national team. It provides some interesting possibilities, with Bradley, Jermaine Jones, Clint Dempsey, and Landon Donovan perhaps all playing in central midfield at the same time, but it also asks a lot of the outside backs. Both of those systems call for unique outside backs and a deep understanding of correct movement and team chemistry. It’s tough enough to get an MLS team to pull it off, as Kreis has done, let alone a group that doesn’t train together more than a week every couple months. It could be done, but the current crop of players isn’t tactically inclined toward it the way Kreis’ Real Salt Lake was.

@liviubird What kind of tactics can be used with that 5-2-3 or 5-2-3 formation? Is it too defensive to succeed against bigger teams? #AskASN

Several Central American CONCACAF teams have played three- or five-back systems (which are essentially the same with wingbacks employed in the manner described above) against the U.S. Costa Rica did it three times in the last year, in the snow game, the Gold Cup, and the return match in qualifying.

The first two times, the U.S. came out on top. But in the third, the Ticos won. In all three, they used rangy wingbacks, two holding midfielders, and three more attack-minded players. Depending on the moment in the game, it looked like a 5-4-1, 3-5-2, 3-4-3, or 5-3-2. So no system is inherently “too defensive” or “too attacking” — again, a formation is not a style of play — and the same one can produce different results over time. Different factors influence the outcome of a game: Did the wingbacks get pinned in their own end, leaving no attacking outlets? Was the opponent able to overload the middle against just the two holding players? Could the wingers find space to support the forwards and run at the three center backs? As you watch more and more games over a packed Christmas schedule, particularly in the English Premier League, these are the questions you have to ask. Instead of wondering simply how many players are in each block, think about how they interact. Look for patterns on both sides of the ball. Where do they run? In which part of the field do they try to play? What kind of counter-movement does each decision create, and how is that exploited? Or is it? Soccer is not a simple game. To get beneath the surface and really appreciate how the best in the world play, that notion must go out the window. Stop thinking that your favorite team needs to “just get a few bounces” to, and start watching with a more critical eye. Never stop learning, and never stop evolving the way you think about soccer. The game changes constantly — so must our understanding. Liviu Bird is ASN’s resident tactical expert. He also writes for SoccerWire.com and will be providing World Cup coverage from an American perspective for The London Telegraph. Follow him on Twitter.