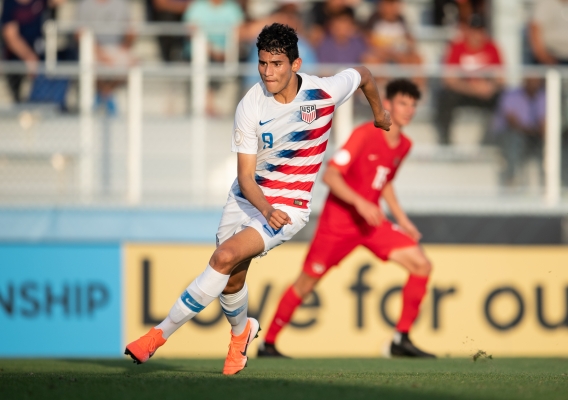 With qualification secure, Pepi sees bright future for the U.S. U-17 team

One of the top players on the U.S. U-17 team, Ricardo Pepi opened his scoring account at the CONCACAF Championships on Sunday in a 3-0 win over Panama. ASN's Brian Sciaretta spoke to the El Paso native about his growing confidence in the team and his future for both club and country.
BY Brian Sciaretta Posted
May 14, 2019
1:55 AM
RICARDO PEPI is one of the more highly regarded players on the United States U-17 national team and after a slow start at the CONCACAF Championships, the forward from El Paso is building momentum heading into tournament’s final stages.

Pepi, was kept out of the scoring sheet during the group stages and the round of 16 blowout win over Gaudeloupe. But in this tournament, the most important game is the quarterfinal because that game alone determines whether or not teams qualify for the U-17 World Cup. In that pivotal game, the United States downed Panama 3-0 with Pepi scoring the final goal.


GOAL Ricardo Pepi! The big striker from El Paso finally opens his account in this tournament. Saldana to Leyva in the center circle, Leyva turns and plays a well-weighted ball behind to Pepi, who beats the keeper far post. You love to see it. pic.twitter.com/iOg4R6vUKj

Pepi’s goal was important, not because it put the exclamation point on qualification, but also because it got its top forward involved and confident heading into the semifinals and finals.

“It was just a goal to make sure we're actually going to the World Cup,” Pepi told ASN. “I was pretty excited. I went from not scoring in two games and it gave me some confidence. It made me hungry to go for more goals.”

On Tuesday the United States will take on Canada in a rematch of the opening group stage game. That game saw the U.S. team fall behind 0-2 before rallying for three goals early in the second half for a 3-2 win.

Thus far Canada has been the only team to really threaten the U.S. team but Pepi is confident that the U.S. team has only improved since that game was essentially the first game under its head coach Raphael Wicky who was hired in March.

Wicky, who boasts World Cup experience as player and Champions League experience as a manager, has an impressive resume at this level and Pepi encouraged with how he has guided the team so far.

“It was our first game together with the new coach against Canada and it was a good game actually. It wasn't bad - the concepts were good,” Pepi said of Wicky. “But throughout the tournament, I feel we've gotten better. We have better chemistry and we understand the plan a little bit more. Everybody is just on the same page. With Coach Wicky, I think we have the ability to have a good run at the World Cup. He's a great coach.”

“It was a great feeling when he was hired,” Pepi added. “We went from having three camps all with different coaches and every camp you had to win a spot with the new coach. That was a little bit frustrating because with every coach we had to adapt. Once we settled in with coach Wicky, things have been going great.”

Wicky is also impressed with Pepi’s maturity despite being one of the youngest players on the team. Having only turned 16 in early January, Pepi is only nine days shy of being eligible for the 2021 U-17 team as well. The Swiss manager only met Pepi for the first time in April but already sees him as an important part of the team’s future.

“I only saw Ricardo in footage first and then I met him at the minicamp [in April],” Wicky said. “I am very happy to have him in this team. Ricardo is a No. 9 who is really clinical in the box. He's a finisher but he also has a certain size which brings a good aerial game. There is room for progress but at his age, I feel he is quite mature on the field. His decision making is actually quite mature for such a young kid….I am sure he is going to be very important for this team in this competition and further on as well.”

Should the United States advance past Canada, it will open the possibility it will face Mexico in the CONCACAF U-17 final – should Mexico advance past Haiti in its semifinal on Tuesday.

For Pepi, that would be a special opportunity as he has personal ties to Mexico as parents immigrated to Texas from Mexico and like many Mexican- Americans, he grew up cheering for El Tri. That allegiance, however, turned when he became more involved with U.S. teams. He has actually also played for Mexican youth national teams but felt it was the U.S. team that trusted him with more significant opportunities.

“It wasn't a very easy decision,” Pepi said of playing for either the United States or Mexico. “Both national teams wanted me but the U.S. took a step and called me up with older national teams and gave me this chance with the U-17’s. With Mexico, they started giving it to me when they saw I was playing with the U-17’s for the USA… It would mean a lot to me and my family. When I was younger, my friends and I all cheered for Mexico. But when I got called up to the U.S. team, they said to go with one I choose and they'll support it. Now they're all cheering for the United States.”

“It would mean a lot to me, to be honest,” Pepi added on a potential meeting with Mexico in the final. “It would give me a little bit more motivation to go play against them. Obviously, I am with the United States right now so I will give everything for the U.S. We're playing against Mexico and I am Mexican too but everything is for the U.S.. Mexico was there for me but they didn't give me the opportunities the U.S. did. They didn't trust me enough to move me up a level and the U.S. did. It is just me showing them what I am capable of.”

In terms of having important opportunities with the United States, it also might not be limited this year to the U-17 World Cup. On Friday, U.S. U-20 head coach Tab Ramos added that Pepi was one of three players on the U-17 team who is on the alternate list for his U-20 World Cup team.

Should Pepi be called-up as an injury replacement he would not only be playing up one cycle – but rather two as his 2003 birth year has him eligible for the 2021 and 2023 U-20 World Cups.

“I am prepared for it,” Pepi said of a potential callup to the 2019 U-20 World Cup. “I will be ready to step into that position and take advantage of it and obviously enjoy it - and do the best I can for the U-20 team. It would be a great opportunity. “

Most likely, Pepi will return to Texas next week to resume playing North Texas SC – the USL League One team of FC Dallas where he has scored four goals in his first two games with the club in its inaugural season. For him, he is hoping to be the next player in the FC Dallas youth movement which has seen many of its academy players earn first team minutes under new head coach Luchi Gonzalez and get call-ups to major youth international tournaments.

“It encourages me a lot because Luchi used to be my academy coach and now seeing him with the first team, that means a lot - both to him and to me,” Pepi explained. “He knows the type of player I am and the future I have. Seeing these young players with the first team, it gives me motivation to be there. It gives me believe there is a path for me.”

For now, however, the only thing that is on Pepi’s mind is the U-17s and its game against Canada. The pressure is off a little bit, however, with qualification secure. Now with nearly six months ahead under Wicky, he sees the potential for another deep run for a U.S. national team.

“I think we have a great team,” Pepi said. “It does give pressure because all the other U.S. teams have been doing well and we don't want to be the one that screws is up [laughs]. But we have a pretty good team and we're confident with our coaches. We should have a good run.”