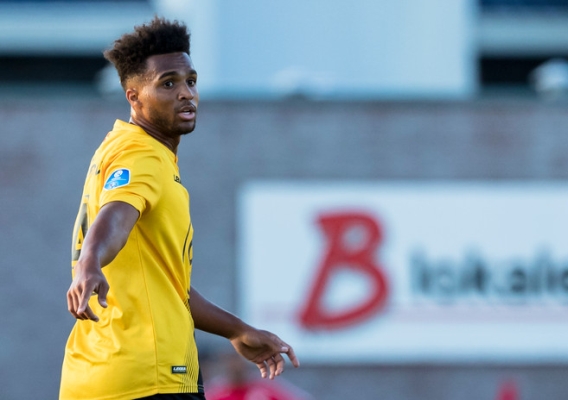 With many out, EPB, Brooks, and other Americans abroad step up

There was plenty to talk about this weekend for Americans abroad despite injuries to McKennie and Pulisic along with top teenagers Jonathan Amon and Tim Weah not playing. ASN also is including a new feature for the ASN American abroad of the weekend, with the first winner going to Erik Palmer-Brown.
BY Brian Sciaretta Posted
February 25, 2019
6:00 AM
AT FIRST GLANCE, it would seem to be a boring weekend for Americans abroad. Christian Pulisic and Weston McKennie were out injured, Tim Weah was an unused sub for Celtic, Jonathan Amon was an unused sub for Nordsjaelland, while Tyler Adams and Duane Holmes didn’t play until Monday.

But lost in all that was an interesting weekend, particularly for the central defenders on the list.


AMERICAN ABROAD PLAYER OF THE WEEKEND

Erik Palmer-Brown, 21, has not received the playing time he hoped or would have liked as NAC Breda have struggled but Palmer-Brown was immense on Saturday in a scoreless draw against FC Groningen and he reminded everyone of the top player he could be.

Physically he was superior to everyone else on the field and he finished with 11 clearances. In central defense, also won four tackles and created two interceptions. NAC Breda is still in last place but Palmer-Brown did his part to help give his team a chance to win.

For this, he was named to Voetbal International’s Eredivisie team of the week and he will likely remain in NAC Breda’s starting lineup for the foreseeable future.

Brooks shines with Berhalter in attendance

United States national team manager Gregg Berhalter was in Germany and in attendance to watch Borussia Monchengladbach host Wolfsburg with Fabian Johnson starting for the hosts and John Brooks starting for Wolfsburg. In the end, Berhalter must have been very impressed with the effort from Brooks who played a full 90 in a big away win.

Brooks, 26, led the game with six clearances and was sharp with his passing all game long. It was one of his best performances of the season. With the win, Wolfsburg moved into fifth place in the Bundesliga which is a far cry from just last season when it narrowly avoided relegation.

Johnson, 31, was mostly invisible in his outing at right back and he struggled to get into the attack for Monchengladbach.

Fluent in German, Berhalter spoke with the local press about Johnson.


"I know Fabian very well,” Berhalter said. “I have a lot of respect for him…he is a versatile player. Sometimes it is a gift and sometimes a curse if you have the ability to play in multiple positions. He has a great range of skills. Being as flexible as Fabian gives the coach tactical options."

"At the last World Cup, a few players have played a lot at this age,” Berhalter later said. “When you get to that age, you take it game by game. I do not think you're planning another four years into the future."

On Brooks, Berhalter was naturally impressed.

"I met John in December," Berhalter said. "He's got a good profile, when I think of his towering frame and how he passes the ball. We'll be coming over to watch him again because we think he has huge potential."

"John's a very good defender," Berhalter continued. "Obviously Bruno Labbadia works with John every day and knows him better than I do, but he's one of those players I'm trying to reach out to and to get to know."


The game between Reading and Rotherham United was massively important in the relegation standings in the Championship. Even in points, with only goal difference separating the two teams straddling the relegation zone, the game was an opportunity for either team to move three points clear into safety.

Reading first half goal did not stand-up as Rotherham’s second half equalizer pushed the game into a 1-1 draw. Both teams are right back to where they were last week.

Miazga played well and was credited with a game-high 13 clearances and a pass completion percentage of 87%. The New Jersey native continues to be an assist for Reading since joining the club in late January on loan from Chelsea. Without a doubt, most Reading supporters would love to find a way for him to remain at the club.


In Turkey’s Super Lig, New Zealand-American Tyler Boyd scored for Ankaragucu in a 2-1 win over Erzurum to move into 13th place in Turkey’s top flight.

The speedy Boyd, 24, has done well in Turkey while on loan from Vitoria de Guimaraes in Portugal. While he is probably still not in the national team picture yet, he is well worth keeping an eye on as he can bring speed from the wing. At the moment he is provisionally cap-tied to New Zealand based only on youth national team performances. He can still play for the U.S. team via a one-time switch with FIFA – which is something he would likely strongly consider/favor at the moment.


Emmanuel Sabbi, 21, got off to a very strong start in the Danish Superliga where he scored five quick goals. The 2017 U.S. U-20 World Cup forward quickly cooled off as Hobro sank to the bottom of the Superliga table.

While Sabbi still hasn’t scored since September 1, he put forward a nice outing off the bench on Sunday as Hobro defeated Esbjerg 2-0 to move out of last place in the Superliga. Sabbi assisted on Hobro’s second goal with a nice move to beat his defender off the dribble followed by an accurate cross.


In the Danish Superliga, US U-23 hopeful Emmanuel Sabbi came off the bench and assisted on Hobro’s 2nd goal in a 2-0 win over Esbjerg. The win moved it out of last place. pic.twitter.com/yes2dExoFX


German-born Andrew Wooten, 29, scored his eighth goal of the season and the 46th goal of his career for Sandhausen in a 3-1 loss to Koln.


In the 2.Bundesliga, American forward Andrew Wooten, 29 (1 #USMNT cap), scored his 8th goal of season and 46th goal of his career in a 3-1 loss to Koln. The guy has been a very effective 2.Bundesliga player in his career pic.twitter.com/vAdNCqpOK5

Wooten has had a very nice career at the 2.Bundesliga level and all but one of his goals came while playing for a 2.Bundesliga club (he scored one Bundesliga goal for Kaiserslautern). Sandhausen is in the middle of a relegation battle but Wooten will likely find another 2.Bundesliga club should the club be unsuccessful in avoiding the drop.


Newcastle United hosted last place Huddersfield town on Saturday and came away with a convincing 2-0 win. While the win wasn’t a surprise, Newcastle played attractive soccer and a large part of it came from Paraguayan international Miguel Almiron who was first-rate in a dominant performance. He thoroughly won over the Newcastle fan base.

While he is not American, his performance helps elevate MLS in the transfer market as he is the most expensive export out of MLS in its history. The better Almiron performs, the more scouts play closer attention to the league and its players. This is also true for Tyler Adams and others who recently were sold.

DeAndre Yedlin also played well for Newcastle in a performance that was significantly improved from his recent outing against Wolverhampton. At one point, Yedlin even combined with Almiron in the build-up to the goal in the second half.