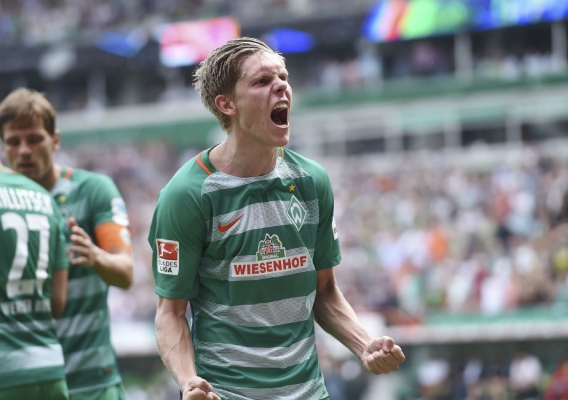 With injuries behind him, Johannsson optimistic after joining Hammarby

The last several years have been a struggle for Aron Johannsson in recovering from injuires and trying to get back on the field. But now fit since March, Johannsson is aiming to revive his career in Hammarby - which he hopes will bring him back to the top leagues of Europe and earn him another chance with the U.S. national team.
BY Brian Sciaretta Posted
July 17, 2019
11:50 AM
THERE WAS ONE moment last winter when Aron Johannsson through his career was over. Having dealt with injuries that have significantly limited his minutes the last several seasons, Johannsson has been always willing and eager to get up from every setback that has been thrown his way.

But back in January, Johannsson, 28, was rehabbing during the Bundesliga winter break in Orlando while on vacation with his family. At the time he was roughly three months removed from his ankle surgery and the rehab in Florida was a very positive experience overall. But when he returned to Germany, he began to train with Werder Bremen and after a few days he felt a lot of pain again. For the first time, he questioned whether or not he could continue.

“One time,” Johannsson said frankly. “Then I went home to my girlfriend and I said to her maybe it's over now. But she kind picked me up and reminded me that I have this never give up mentality and then I went to sleep and then I woke up the next day ready to fight for it again.”

But from a low point, things began to trend upward once again for Johannsson who was especially proud of the fact that since his final setback, he had not missed a training session with Werder Bremen since March. As the season progressed, he began to even make the matchday rosters once again in the Bundesliga.

But Johannsson was now in the final year of his contract with Werder and he had a lot of decisions to make about where his next step would be. He realized he would have to take a step back to move forward but he had interest from clubs in a wide range of leagues. The option of Hammarby in Sweden’s top flight intrigued him the most. It is a club that draws big crowds in Sweden and one where the could contribute as it attempts to climb towards the top of the Allsvenskan table.

“I had interest that was very hard to explain,” Johannsson told ASN from Stockholm. “It was very comforting for me to see actually how many teams from different countries were interested in me even though I've been injured for such a long time. It gave me like a confidence boost in my time where I was not feeling so good. I had many offers that were financially better than here in Sweden but I wanted to come back to a very competitive league with a very good and amazing club.”

“I believe that I'm good enough and it's just about getting fit and staying fit for a longer period of time,” he added. “And with me, my quality has never been the problem. I've gone through very, very, unlucky injuries and they took unfortunately a very long time… I'm coming here to try to go back to the top leagues again. I've been in Germany for the last four years and I'm absolutely 100 percent sure that when I'm fit and healthy, I can play in that league. I hope I get the opportunity to play there again. But obviously I need to play well here.”

Johannsson has been in Sweden for a little more than a week and is still getting up to speed with his new club where he will likely be an offensive substitute for awhile before being in contention for a starting spot. Hammarby currently sit in sixth place in the 16-team Allsvenskan but only four points separate it from third place, and the final spot in Europe.

But in addition to his club ambitions, Johannsson also thinks about his birth-country. Born in Alabama while his Icelandic parents were exchange students, Johannsson was raised in Iceland and played for Icelandic youth national teams. After breaking out in Denmark with AGF Aarhus, he attracted the interest of U.S. Soccer and filed his switch to represent the U.S. team after he completed a move to AZ Alkmaar. He went onto play one game at the 2014 World Cup and then at the 2015 Gold Cup but injuries have limited him since a pair of friendlies in September 2015.

He readily admits that the switch to playing for the United States strengthened his bond with the country on a persoanl level even though it has been years since his last cap.

“Even to this day it definitely did strengthen my ties,” Johannsson said about switching to the U.S. team back in 2013. “There's still so many American fans that are always reaching out to me. And you have to think about how I want to play in MLS and the doors is much more open for me now. To go back and live again because it has always been a dream to play in MLS and to live in America again.”

While away from the U.S. team, his ties with American soccer haven’t been severed. He struck up a friendship with Josh Sargent at Werder Bremen and went out to dinner with interim manager Dave Sarachan in 2018 in Germany. At the time Sarachan wanted to bring him into camp but Johannsson was still not ready physically.

He also painfully watched the U.S. team’s failure to qualify for the World Cup against Trinidad & Tobago knowing that his injuries likely cost him a chance to play with team and to be there to help achieve a different result (“I always felt when I was watching that if I was fit and if I was healthy I could have been there,” he said).

Earlier this year, Johannsson met current U.S. manager Gregg Berhalter in Germany and listened to his ideas for the national team. It left him both optimistic for the future and motitivated to get back into the picture while playing for Hammarby - a club which Berhalter used to manage.

“We went out for dinner in Bremen when he came,” Johannsson recalled of meeting Berhalter. “He had some very good ideas. He knows exactly what he wants from the team. It was very interesting what he was telling me how he wanted to play with the team. I just feel the ideas that he has and this group some of both veteran players and a lot of young players with very exciting qualities - I think it can be very interesting years ahead…. And obviously that's also part of the reason why I came to Sweden because I know that if I were to go into some country far away who can give me a lot more money than then my dream to be in a national team would be even further away.”

But for now, Johannsson still has plenty of work to do in order to get back onto the U.S. team. He will have to play well for Hammarby and prove his injuries are now behind him. The Mobile-born attacker has been through a lot but when reflecting on it all, he believes he is now stronger mentally – both as a player and as a person.

“It has definitely made me stronger mentally and to be more thankful for the times that I get to spent on the pitch training and playing,” Johannsson recalled. “It was a strange thing but when I went back to the hospital not happy about that I didn’t recover faster and angry that I had been injured for about nine months. The first thing I saw when I walked into the hospital was a guy, probably in his early 30’s he was missing one leg. The doctor couldn’t give me any answers about when and how long it would take to be back on the pitch but seeing this guy with one leg helped me so unbelievable much mentally. To appreciate life and be thankful that I have the opportunity to play soccer even though I have to carry a small injury once in a while.”