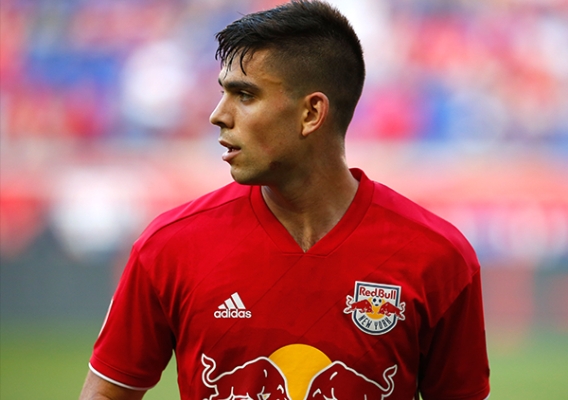 With BWP as a mentor, White becomes latest Red Bull to breakout

The Red Bulls have been the career starting point for a lot of significant American players. Brian White is looking to become the next as he helps his team deal with the absence of club legend Bradley Wright-Phillips, who also happens to be White's mentor. ASN's Brian Sciaretta with the story.
BY Brian Sciaretta Posted
July 31, 2019
9:00 PM
MORRISTOWN, N.J. – It has been a mixed season for the New York Red Bulls who have had ups and downs in a transition year. At the start of the season, it was known the team would have to adjust to the departure of Tyler Adams and it being the first full season under head coach Chris Armas.

But this season has added another wrinkle with the diminished role of star striker Bradley Wright-Phillips who has seen minimal playing time due to injuries. Wright-Phillips has been one of the best forwards in the league but of all the changes the Red Bulls have dealt with, the absence of the striker has been tolerable thanks to the play of American forward Brian White.

White, 23, is in his second year as professional since being drafted by the Red Bulls in 2018. As a local player from Flemington, N.J, White grew up playing for the New Jersey club the Players Development Academy (PDA), before playing for Duke University. In the summers of college, he played for the New York Red Bulls U-23 team which played in the Premier Development League.

“I knew I was going to have to have to wait my chance behind Brad,” White told ASN. “But you know Brad's been great in helping me, the coaching staff has been great in helping me. In every game I am just trying to learn from every mistake and try to build confidence with every game. So I am just trying to help win an MLS Cup with this team score a few more goals.”

The numbers White has put up this year have been very impressive. In 15 appearances for 1105 minutes, White has scored eight goals while adding two assists and drawing a penalty.

Despite White’s success, the club has been inconsistent this season and sits in fifth place in the Eastern Conference. White has four goals in his last six games but the club has lost two of three, including a difficult 3-2 defeat to Columbus last weekend.

“I think we're trying to put that game behind us as soon as possible,” White said. “You know that we know we didn't come out with the right mentality, the right energy and that's on us. Like you said, it has been an up and down year but I don't think it's necessarily anything that the team is missing - it is just lapses here and there. We have all of the parts we need and it's just a matter of putting it all together and finding the full 90-minute performance we've been looking for.”

During his season, White has found that one of his biggest allies has been Wright-Phillips himself, who has worked and mentored White to help him transition into the top-flight league.

“I don’t know where to start with Brian,” Wright-Phillips added. “I’m a big fan of Brian. I think his all-around play is – I’m not sure you’ll notice this – but I think it’s very underrated. I think his finishing is top class, he proves that every day in training.”

White has appreciated the help and is quick to point out just how beneficial the relationship has been.

“It's been great to have Brad,” White said. “He's always there for me - before the game, during halftime or after the game, even in training he's always giving me little tips - whether it's a run or it's a type of finish I should try in a certain situation. I'm just trying to be like a sponge and take everything in…Against Chicago, at halftime and he found me and told me to be more selfish in getting into the box. Not just trying to do the defense work but trying to specifically keep my mind on getting in the box offensively. I ended up having a goal from just running straight towards the box and trying to get on the end of things.

For Armas and the coaching staff, it has been beneficial to see the older generation help bring the younger generation up to speed quickly.

“Take Brad out, Brian is in, and Brad becomes Brian's biggest fan and mentor, still coaching him along the way,” Red Bull manager Chris Armas said. “It's really nice to see on the inside the relationship with those two…I think one of Brian’s best qualities, he runs off the ball well. His timing of when to arrive, he's got that feel for things inside the box, kind of like Brad does. They show up just in the right moment, in the right space and the right time.”

White’s rise is the latest success story for the Red Bulls who have been able to coach players to being above average players - often through its USL team. On the 2016 USL winning team, the Red Bulls II had two future U.S. national team starters in Tyler Adams and Aaron Long. That team has also produced quality players in Sean Davis, Alex Muyl, and now White.

But the philosophy the club has between the first and second team in New Jersey carries across the Red Bulls teams throughout the globe and has seen Tyler Adams make a quick transition to the Bundesliga with RB Leipzig and former New York head coach Jesse Marsch carry his success to Europe where he is now the head coach of Austrian champions Red Bull Salzburg.

“From every group at every level, the philosophy is always the same,” White said. “Even when I was with the [Red Bull] U-23's, the ideas was always play forward, counter press - all those key words that we use in our meetings an preparing for games. Going through that a little transition, they make it easier because you know your job, you know the role, you know what's asked of you. So you go out there and do what you've been doing and hopefully you can adjust to another level.”

And will White soon have to adjust to another level? Two more goals will have him in double digits and there is a good chance the MLS season could finish with White as the league’s leading American goal scorer under 30 years old.

In that perspective, a call-up to the national team for January camp becomes an entirely realistic goal – even if White insists he is not thinking about it.

“Right now, I am focused on hopefully getting to 10 goals and helping the team win,” White said. “If the call comes, I'll be over the moon excited. It's a dream of every soccer player to represent their nation and get called into a camp. But right now you can't get caught up in it. You just have to focus on just developing as a player in every way and trying to help the team win - hopefully get to 10 goals.”