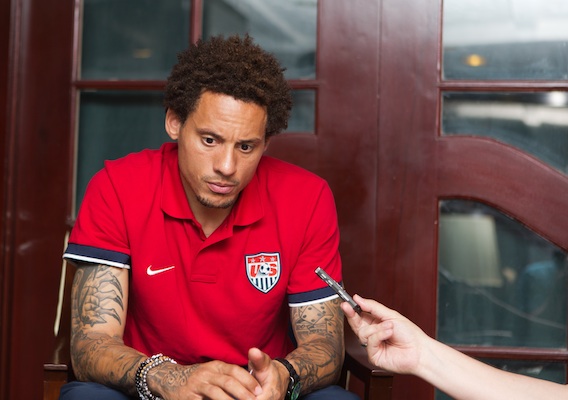 The German-American midfielder dishes out abuse on the pitch, but he takes more than his fair share here on American Soccer Now. Not from the editorial team—from the readership.
BY John Godfrey Posted
September 04, 2013
10:17 AM
I GET IT, AT LEAST ON ONE LEVEL: Jermaine Jones isn't cuddly. He's not big on opening up to the press. He has That Glare that doesn't exactly invite banter. From most vantage points, he seems perpetually annoyed. And yes, the midfielder's yellow card accumulation—he was booked seven times for the national team last year—has become something of a punch line within the U.S. soccer community. But wow—some of you folks truly despise the guy. You berate us for ranking him as high as we do—No. 7—in our ASN 100. (One snarky commenter suggested Jones would be overrated if he was ranked 70th.) You give him a tough go of it in the Player Ratings pretty much every match. And in a poll we posted yesterday about alternate candidates for the U.S. armband, the Schalke star and Champions League veteran didn't even manage a single vote.

We posted another poll late last night: "You Have to Bench One of Klinsmann's Core Guys. Who Do You Sit?" It's on the homepage. I don't even have to look—I guarantee you that Jones is at the top of the list. (OK, I just checked. And yes, he is.) What's the deal? Putting the personality part aside—or rather, the perceived personality part, since it’s fair to say that most of Jones’ detractors don’t know the married father of five at all—I reached out to ASN’s Resident Tactician Liviu Bird to talk about the German-American’s actual gameplay. John Godfrey: Liviu, why do so many people have a problem with Jermaine Jones? Tactically speaking, do they have a leg to stand on? Liviu Bird: It seems like a lot of fans get frustrated with Jones because they perceive him as being unnecessarily physical. JG: It sometimes seems like Jones and Michael Bradley are not on the same page in terms of who goes forward and who stays home. Do you have any evidence to support or rebut that? LB: In a system with two deep central midfielders, either one is designated as the holding player and the other is "box-to-box," meaning he will drift all over the field, or they both play box-to-box in a double pivot: as one steps, the other stays. It seems that Jürgen Klinsmann prefers the former (in interviews, he has referred to Jones as "the No. 6," which is the holding player, and Bradley as "the No. 8," which is the box-to-box player), but in reality, Jones also wants to get involved in the attack. Trouble is, his ability on the ball and his vision going forward is nowhere near as good as Bradley's — but his defensive ability is great. JG: Jones commits a lot of "professional fouls," which often lead to him getting booked. Should U.S. fans hold that against him, thank him for the doing the dirty work, or both?

LB: Very few players on the team have shown the ability to play well in psychologically adverse situations. One of Jones' best games in a U.S. uniform came against Costa Rica in the snow. As for his fouling, it comes with the territory of a No. 6, who is often the most physical player on a team. As long as he can rein it in, he does just fine. Nobody protects the back four as well as Jones. And he gets nowhere near as many yellow cards as most fans think. His last one before the one he picked up in Salt Lake was on Oct. 12, 2012, at Antigua and Barbuda. It seems to be improving with time. He's getting smarter on the field with regard to the tackles he goes into and how, so by next summer, this could be a non-issue.
KLINSMANN, FOR ONE, acknowledges that Jones plays on the edge: “Jermaine is a Champions League player," the coach said last year. "If you want to play there, then you have to be good. And he is good. Now, his temper is always something to discuss and we even make jokes about that in the locker room, but if he gets that under control then we have a very, very good player there. He has high energy and the opponents have a lot of respect for that guy.” I’ve watched enough Schalke matches to realize one thing: In the Bundesliga, Jermaine Jones thrives as the No. 8—the Michael Bradley role—going box to box and pushing into the attack as he sees fit. He took 32 shots last season and completed 26 key passes for Schalke. In Germany he's a creator of chances, just like Bradley. The trouble is, the U.S. national team already has somebody playing the Michael Bradley role—Michael Bradley. It can’t be easy to constantly train and play for your club with a very particular mindset and then show up for national duty and be asked to instantly change your instincts. But that’s how international soccer works: Your plane lands, you practice for a day or two, you lace 'em up and go. And sometimes you’re asked to play in a different role than you’re accustomed to. I’m not in the locker room and I have no idea what Klinsmann tells his players, but it seems to me that if Jones played midfield less like Bradley and more like Kyle Beckerman—a true safety-first No. 6—everyone would benefit. A young back line would know they have a steely veteran in front of them. And Bradley could burst forward without wondering if Jones is holding the fort. Is that the official gameplan? I don’t know. But if it was, and everybody knew it, and Jones embraced it, I’m pretty sure that American Soccer Now’s smart, passionate readers would quickly learn to appreciate all that Jermaine Jones brings to the game.

OK, I wrote this knowing full well that I was inviting your wrath. Feel free to get stuck in below, in the Comments section. John Godfrey is the founder and editor in chief of American Soccer Now.