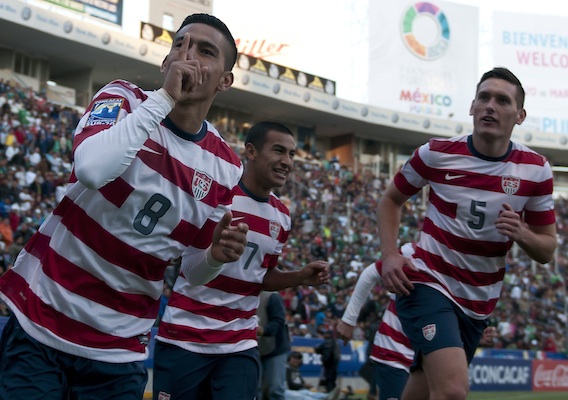 The 2016 Summer Ganes in Rio de Janeiro are still a ways off, but ASN Contributing Editor Brian Sciaretta looked into his crystal ball and came up with 18 names for the next U.S. Olympic soccer team.
BY Brian Sciaretta Posted
February 27, 2014
12:09 PM
ON SUNDAY THE OLYMPIC FLAME was extinguished in Sochi, Russia, which immediately got me thinking about the next time it will be lit—890 days from today in Rio de Janeiro, Brazil. Two-and-a-half years is an eternity for youth soccer development, and much will happen between now and the next Summer Games. But I thought it would be fun to project who will make the 18-player U.S. Olympic soccer team. Of course, there is no guarantee that the Yanks will even qualify for the 2016 games. The memory of the “Nightmare in Nashville,” when the U.S. U-23 team failed to qualify by not even advancing out of its group with Cuba, El Salvador, and Canada, still haunts the program. Nevertheless, here is my predicted roster (with a few important assumptions). First, I am going to assume a strict U-23 team with no overage players. There are so many considerations with overage players. Will clubs release them? Also, if the combined Copa America/Gold Cup in 2016 comes to fruition, will players available for the Olympics be used for the Copa instead? So for now, I am just going to put out the best U-23 team. Also, I am not going to consider dual nationals who are still playing for the youth teams of other countries. While these players could still file for a one-time switch and be U.S. eligible at a later date, for now they are not considered for this list. So no Julian Green, Shawn Parker, etc. With that said, here is my early prediction for the 18-player roster for the 2016 Olympics in Rio de Janeiro.

3) DeAndre Yedlin
4) Marco Delgado
5) Shane O'Neill
6) John Anthony Brooks
7) Will Packwood
8) Kellyn Acosta
In the Mix:Juan Ocegueda, Matt Miazga, Erik Palmer-Brown, Walker Zimmerman Notes: The defense probably stacks up better than any other area on the field for the U.S. Will Packwood is a first-team starter at Birmingham City; John Anthony Brooks has played for the full national team and has earned Bundesliga minutes; Shane O’Neill, Marco Delgado, and DeAndre Yedlin are promising starters in MLS; and Kellyn Acosta is sufficiently versatile to provide cover anywhere.

9) Wil Trapp
10) Russel Canouse
11) Luis Gil
12) Benji Joya
13) Junior Flores
In the Mix: Caleb Stanko, Jordan Allen, Emerson Hyndman, Danny Garcia, Collin Martin, Joel Sonora, Luis Felipe, Kris Scott. Notes: As it stands right now, only Wil Trapp and Luis Gil are earning consistent minutes among this group. Benji Joya looks promising in preseason with Chicago but as with most players it comes down to performance with their clubs in meaningful games. Emerson Hyndman is coming on strong with his development at Fulham and could force his way onto the team in the coming year.

14) Paul Arriola
15) Lynden Gooch
16) Rubio Rubin
17) Ben Spencer
18) Duane Holmes
In the Mix: Jose Villarreal, Romain Gall, Omar Salgado, Jack McBean, Amando Moreno, Zach Pfeffer, Alonso Hernandez, Daniel Cuevas, Victor Pineda, Kyle Scott Notes: Expect a lot to change in the U.S. attack in the coming year—mostly because so many players currently lack significant professional experience. Paul Arriola has shown glimpses of quality with Tijuana and Duane Holmes has impressed in his first season in the English Championship. The fact that they are earning first-team minutes makes both of them strong contenders. Lynden Gooch has been coming on very strong this season at the youth levels for Sunderland and is likely to be an integral part of the new U-20 team. He has strong playmaking and finishing abilities, and could make himself indispensible. Similarly, Rubio Rubin is a favorite of Tab Ramos early in the cycle and is set to join Utrecht. Ben Spencer may seem like a bit of a stretch but the reality is that the team will need a target forward and Spencer has been among the top center forwards for U.S. youth national teams at his age level. This season in Norway will be important but if he can play well and earn a spot on the U.S. U-20 team, he will be in the driver’s seat to earn a spot to Rio in 2016. So there you have it—my preliminary 2016 U.S. Olympic soccer team. Agree with these selections? Disagree? Let’s have it out in the Comments section below. Brian Sciaretta is an American Soccer Now columnist and an ASN 100 panelist. Follow him on Twitter.