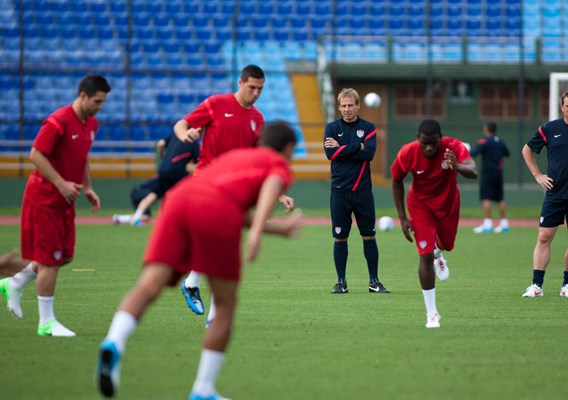 Who Will Klinsmann Pick for World Cup Qualifiers?

With two crucial, winnable games on the horizon, we expect to see a U.S. roster filled with many familiar names for the upcoming qualifiers against Antigua and Barbuda and Guatemala.
BY John Godfrey Posted
October 03, 2012
10:00 PM
Jurgen Klinsmann needs two wins.His stars are healthy. The competition is inferior. And his program, which struggled against Antigua and Barbuda at home in June, tied Guatemala on the road a few days later, and lost to Jamaica just last month, desperately needs to make a statement. The United States men's soccer team, ranked 33rd in the world and 2nd in the CONCACAF region, can and should dominate its next two World Cup qualifiers—regardless of weather conditions, field quality, or any other factors. The Yanks take on the tiny island nation of Antigua and Barbuda on October 12 in Sir Vivian Richards Stadium in North Sound, Antigua. Four days later, the team hosts Guatemala in Livestrong Sporting Park in Kansas City.Expect the coach to stick to familiar names and tactics as he attempts to secure passage to the final round of regional World Cup qualification."Right now it's not the right time to bring in a bunch of new players," Klinsmann told ESPN recently, and he's right. These two matches should not require any sort of experimentation or trickery. Keep it simple, keep it clean, get six points, and get ready for the Hex.Given that, who should Klinsmann call up for the two matches? Here is a look at his roster options, along with an opinionated take on who should receive the call.GOALKEEPERS
Klinsmann will probably call in three goalkeepers for the next two matches, but there is only one name that matters and only one keeper likely to see the pitch: Tim Howard. Everton's first-choice backstop is at the top of his game for both club and country, and if he doesn't play 180 minutes over the next two contests it will be a complete shock.In terms of backups, expect Brad Guzan and Nick Rimando to make the team. But unless there is an injury, don't expect either of them to do anything other than help out in practice and root from the sidelines. DEFENDERS
A transformation has taken place in the U.S. back line over the last few months. Even though they only have 17 international appearances between them, central defender Geoff Cameron and left back Fabian Johnson are almost certainly the first two names Klinsmann will pencil in to his back four. And rightly so. Cameron, who recently transferred from MLS's Houston Dynamo to the English Premier League's Stoke City, has moved up a level without batting an eye. Cameron can play in the center of defense, at right back, or even in the midfield, but his preferred role with the Stars and Stripes is central defender.Johnson is a speedy, sturdy, two-way fullback who boasts a versatile game. He can terrorize opposing defenders with his speed and skill, maintain possession and advance the ball as needed, or simply lock down his side of the field defensively. Johnson is off to a great start for the Bundesliga side Hoffenheim and looks like a first-team regular for the foreseeable future.With those two slots taken, who else makes the team? Team captain Carlos Bocanegra and Steve Cherundolo are strong candidates for the other two starting spots along the back four. The veterans provide experience, leadership, and offensive skills. Among ASN 100 defenders, Bocanegra ranks fifth with 13 career goals for the U.S.; Cherundolo is fourth in assists with 10.The reserves will probably include Clarence Goodson, Michael Parkhurst, Jonathan Spector and Michael Orozco Fiscal, who strengthened his case for inclusion on the roster with his timely goal against Mexico in August. (Yes, we think Omar Gonzalez and Eric Lichaj both deserve call-ups; we just don't think it should, or will, happen now.)MIDFIELDERS
Against Jamaica, the U.S. played without its two best midfielders, Michael Bradley and Landon Donovan. And yes, it showed: Jamaica controlled the center of the pitch and dictated play for long stretches in both contests. With Bradley and Donovan expected back, that should change. Donovan's speed and touch gives the Americans a lethal counterattacking threat, and Bradley's multifaceted game can destroy, create, possess—whatever game conditions require.Danny Williams—a revelation in the No. 6 role in the second match against Jamaica—Kyle Beckerman, and Jermaine Jones are virtual locks to make the team as well, but after that it gets interesting. Maurice Edu's move from Rangers to Stoke City has resulted in a loss of playing time—at least in the short term—and he might not be in game shape. Jose Torres, on the other hand, has seen plenty of action for Pachuca but has struggled of late with the U.S. national team.Our prediction: Klinsmann will call on Brek Shea for his game-changing energy and strength, and will once again call on Graham Zusi. Torres will also make the roster, but if he doesn't make a positive impression soon, he may not get many more chances. FORWARDS
Simple: Clint Dempsey, Jozy Altidore, Terrence Boyd, Herculez Gomez, and...somebody else. Eddie Johnson and Chris Pontius both deserve a shot, but Klinsmann has stated publicly that he isn't interested in bringing in new guys right now. Because of that, Chris Wondolowski—who seemingly scores for fun in MLS and has played for Klinsmann this year—is a logical choice as the fifth striker on the roster. So here it is, the roster we'd like to see, and expect to see, against Antigua and Barbuda and Guatemala:Brad Guzan
Tim Howard
Nick Rimando
Carlos Bocanegra
Geoff Cameron
Steve Cherundolo
Clarence Goodson
Fabian Johnson
Michael Orozco Fiscal
Michael Parkhurst
Kyle Beckerman
Michael Bradley
Landon Donovan
Brek Shea
Jose Torres
Danny Williams
Graham Zusi
Jozy Altidore
Terrence Boyd
Clint Dempsey
Herculez Gomez
Chris WondolowskiAll of the players listed above are in our inaugural ASN 100, so check out their profiles (and be sure to click on the tabs up top to interact with the rankings). We'd also encourage you to read the ASN Questionnaires filled out by Altidore, Beckerman, Cameron, and Rimando.