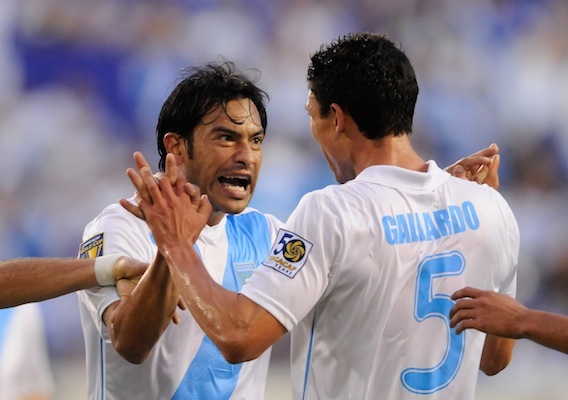 Get to know your foe

Who Are Guatemala's ASN 100 Doppelgangers?

Guatemala-based journalist Brent Latham breaks down the Chapines squad, offering comparisons to players on the ASN 100 to help you understand what Jurgen Klinsmann's troops will face in KC.
BY Brent Latham Posted
October 16, 2012
5:30 AM

The United States needs a point against Guatemala on Tuesday evening. We break the probable Chapin starting lineup down and tell you who he plays like. Impress your friends at the bar later. And learn some things, too.

Ricardo Jerez (GK) Most similar to Tally Hall—ASN No. 85 From Hall’s ASN 100 profile: "The biggest thing with [him] is, he’s got everything. He's 6-foot-4, he's a great athlete, he's got good hands, he's a bright young man, he’s a student of the game. And then, the X-factor: He’s a great guy in the locker room, a great guy to have around," Hall’s college coach, Lev Kirshner, said in 2008. All of that applies to Jerez (well, he’s about an inch shorter), the quiet leader of this Guatemalan team. Jerez has goalkeeping in his bloodlines—he’s the son of perhaps the best Guatemalan netminder ever. Edgar Jerez backstopped Guatemala through four World Cup qualifying campaigns from 1982-1994, and to the 1988 Olympic Games—perhaps the country’s greatest-ever accomplishment in soccer. On Tuesday night, with an inexperienced defense in front of him, much of Guatemala’s hopes will depend on the younger Jerez’s ability to step up. Elias Vasquez (D) Most similar to Perry Kitchen—ASN No. 71 Vasquez has rocketed up the ranks in Guatemala. At just 21, he’s a regular national team choice for Coach Hugo Almeida. It’s little coincidence that Vasquez captained the U-20 squad that infamously bounced the U.S. from qualifying last year—a team Almeida also coached. Out of action of late with an injury, the defender was an emergency call-up when Guatemalan centerbacks began to drop like flies. Whether it’s a five-man back line or a 4-4-2 on Tuesday, the young Vasquez will be the key figure looking to stop Dempsey and Co. Ruben Morales (D) Most similar to A.J. Soares—ASN No. 93 It’s hard to compare Morales to any of the ASN 100—he’s a journeyman defender who currently turns out for a team in Guatemala’s second division. But given the injury situation, he’s been forced into action as the only healthy central defender the Chapines have to put next to Vasquez. He’s also a guy you wouldn’t expect to find on the national team. So who’s the best American comparison? Soares works, and not just because he’s one of the lower-ranked defenders in the ASN 100. Morales is a physical but undersized CB, so the Americans might be well advised to at least try out the aerial route against him and his backline mates.

Claudio Albizuris (D) Most similar to Nat Borchers—ASN No. 59 A steady-but-not-spectacular veteran CB, Albizuris got this call-up after three more highly rated CBs went down to injury in recent weeks. With Guatemala looking to avoid taking goals first, look for the Municipal man to get the start in the middle of a five-man back line on Tuesday—if he’s recovered from a knee knock which kept him out versus Jamaica. Erwin Morales (D) Most similar to Heath Pearce—ASN No. 47 An outside back who likes to get forward in attack, Morales can also be used as a fill-in CB. He’ll be somewhere along the defensive line Tuesday night, though his runs forward might be extremely limited given the circumstances. Jonathan Lopez (D) Most similar to Eric Lichaj—ASN No. 26 Flanking his three-man central line, Almeida likes to use offense-minded wingers as outside backs. But Lopez is a true defender who provides a more conservative approach. Nevertheless he is capable of getting forward to get a good cross in, and can play on either side of the field. Manuel Leon (MF) Most similar to Kyle Beckerman—ASN No. 25 For the national team, Leon provides a stay-at-home presence on top of the back line, complicating matters for the opposing midfield that attempts to play through on the ground. He can get forward and has an effective long range shot, but don’t expect to see him stray out of Guatemala’s half much on Tuesday. Jose Contreras (MF) Most similar to Jeff Larentowicz—ASN No. 61 Contreras is a two-way midfielder who will attack occasionally, though usually without much success. As with Leon, his role Tuesday night will be to sit back and snuff out any American advances into the attacking third, and outlet the occasional ball to the wings in an attempt to spark a counter. Carlos Figueroa (MF) Most similar to Graham Zusi—ASN No. 17 Figueroa hasn’t always been a Guatemala regular, but he’s a man on fire in league and international play. His sensational goal Friday, when he somehow beat four Jamaicans on the dribble then deposited the ball into the net to give his team early momentum, set the tone for the Chapines’ week. Figueroa is capable of providing just that sort of individual effort; the Americans will need to be careful not to get burned on Tuesday. Marco Pappa (MF) Most similar to Landon Donovan—ASN No. 4

American fans know enough about Pappa to understand the damage he can do from his midfield spot. The good news is that Guatemala’s best player hasn’t played a club match in over a month, since moving from Chicago to Heerenveen, and looked terribly out of rhythm on Tuesday night against Jamaica.

He may not be identical to Donovan in terms of his style of play—Donovan is a bit more of a get-into-the-box assist man while Pappa is dangerous from outside the 18—but the two are overwhelmingly similar in terms of their vital importance in sparking the national teams’ offensive flow. Carlos Ruiz (F) Most similar to Herculez Gomez—ASN No. 12 Another Guatemalan with whom all U.S. soccer fans are familiar, finding an apt American comparison is truly difficult. Gomez is such a nice guy, but the duo’s other similarities fit pretty well. Ruiz is an experienced scrapper who has fought his entire career and never gives up on a ball, can score in many different ways, and almost always finds a way to put his stamp on national team games. Keeping him from getting his chances will be the tallest order of the day for the American defense on Tuesday night. Brent Latham has watched the above players hundreds of times over the last few years.