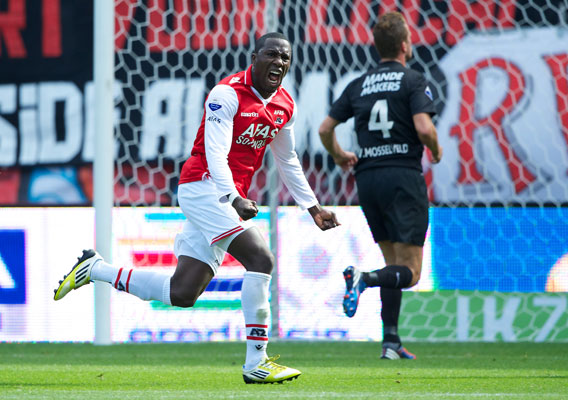 Where is the Best USMNT Action? We Have It Here

American Jozy Altidore is tearing it up in the Eredivisie but he faces a stiff test on Friday. After that, check out Michael Bradley and Oguchi Onyewu as they lead the United States contingent in Europe.
BY Jon Arnold Posted
December 21, 2012
8:41 AM
Many European leagues are on winter break, but don’t fear American soccer fan. Other leagues are soldiering on. This week brings a USMNT v. USMNT matchup and a chance to see a prodigious American who doesn’t grace our screens often enough. It’s all the reason you need to skip that trip to the mall. FRIDAY AZ Alkmaar v. FC Twente 2 p.m. (all times Eastern) ESPN3 Jozy Altidore is hot, scoring three goals in the last two matches for AZ. Unfortunately, the Eredivisie isn’t the easiest league to find on U.S. TV. This week, AZ plays second-place Twente and ESPN3 picks up the slack by showing the Friday matinee. You can duck out early (it’s Christmas!) or just pull up an extra browser video and catch Altidore’s exploits. The previous three goals have been great, but it’ll take something special against a very strong Twente side. If the young forward succeeds, it will only build a case for a move to a larger club. SATURDAY Tottenham v. Stoke City 10 a.m. Fox Soccer Plus You’ll need Fox Soccer Plus or FoxSoccer2Go to catch this showdown between two national team mainstays. Clint Dempsey and Geoff Cameron may line up for the Stars and Stripes, but don’t expect Cameron to bring Dempsey any figgy pudding after this one. Mainly because who actually eats figgy pudding? In all seriousness, Dempsey might not make the field for Spurs with the return of Gareth Bale. Hugo Lloris will likely keep Brad Friedel on the bench instead of in Tottenham’s goal as well. Stoke City’s Maurice Edu has seen only nine minutes of play this season. For all that, Geoff Cameron is excellent to watch in Stoke’s defense, and he’ll almost certainly be starting for the Potters. Málaga v. Real Madrid 1:55 p.m. beIN Sport It wasn’t a bad week for Oguchi Onyewu, even as Málaga deal with a ban from European competition next season. He redirected a free kick midweek to bring the club level in the first leg of a Copa del Rey fixture.
Copa Del Rey Eibar 1 Málaga 1 by acosart He also found out Málaga’s Champions League opponent in the Round of 16 is Porto, which is pretty solid when it could’ve been Manchester United or Real Madrid or something. Oh, right. It’s that same Real Madrid squad headed into La Rosaleda. Will Onyewu be called upon against los Blancos? It’s unlikely, but if he is you won’t want to miss it. Roma v. AC Milan 12:45 p.m. RAI International, tape delayed at 4:00 p.m. on beIN Sport Michael Bradley and Roma face Milan in a match between two clubs currently sitting just outside the European places. That’s not acceptable for either of these storied Italian teams, so this match is shaping up to be paramount. They were helped by a point deduction to Napoli this week, but knowing what we know about the ASN No. 1, Bradley would be much happier to get three points and climb the table. If they drop the match? The General and his men will be jumped in the table by Milan. SUNDAY Chelsea v. Aston Villa 10:30 a.m. Fox Soccer Brad Guzan has been ultra reliable for Aston Villa in goal, making six saves against Liverpool last weekend. Chelsea brings some different challenges, but Guzan has shown he’ll be up for them. Also of interest is that Eric Lichaj has played in Villa’s three previous matches. While Guzan is biggest reason to get out of bed and watch this one on Sunday, checking in on Lichaj’s progress may be an added benefit. Jurgen Klinsmann would certainly like to see a new left back alternative emerge, especially with the qualifying and the Gold Cup fast approaching. BEST OF THE REST Premier League: West Ham v. Everton 10 a.m., Saturday, FoxSoccer2Go—Catch Tim Howard and an Everton side that always seems to squeeze some excitement out of every match. West Ham could name 20-year-old Sebastian Lletget to the team as well. NO U.S. ANGLE BUT... Actually, you might just want to stick with the matches with U.S. angles this weekend. So what are you watching this weekend? Which matches did we miss that we should tune in for? Tell us in the comments section below. Jon Arnold (@ArnoldcommaJon) is a freelance writer based in Phoenix and the co-host of MLS in 30 on NASN.TV.