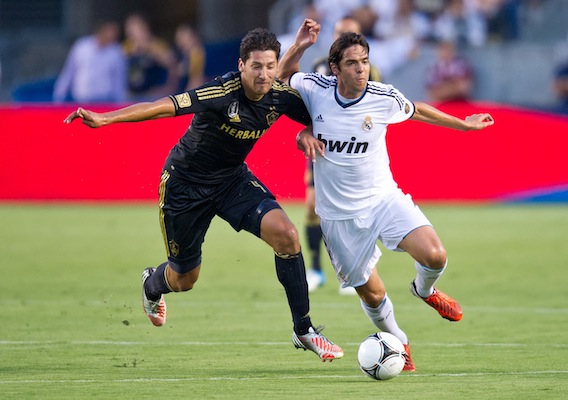 Learning from the Legends

In ASN's new column, Eric Beard compares a legend in the game to an up and coming American player. Today, he asks two experts how Omar Gonzalez can use the model created by Alessandro Nesta.
BY Eric Beard Posted
October 18, 2012
7:00 AM

Learning from the Legends runs every other Thursday on ASN.

On July 6th, at the height of the Alessandro Nesta buzz surrounding MLS and Montreal, Impact owner Joey Saputo tweeted (in French), “Investing in players with experience allows the academy players to develop. Imagine training with Nesta/Rivas/Ferrari/DiViao”. Joey, the player you’re paying over a million a season is named "Di Vaio," but we get the point. And we’re going to take that idea to the next level.

No, we’re not suggesting that the Impact swoop in and sign Omar Gonzalez to benefit the Stars & Stripes, but there are similarities between the two players. Sure, the Italian stud has won the Champions League twice and the World Cup once, whereas Gonzalez has an MLS Cup and an NCAA Men’s Division I Championship under his belt. But Nesta has a dozen years on the 24-year-old from Dallas, so there’s plenty of time to catch up. We kid—no one can be Nesta—but the idea behind “Learning from the Legends” is not to say that Nesta and Gonzalez are the same player. Instead, we want to use the model provided by a world-class star to serve as a guide for some of the most promising American talents. So Plato had his Forms, and the closest we can come to that level of perfection for a tall, aggressive center back is Alessandro Nesta.

Without further ado, let’s get down to specifics. We asked two experts, roughly 6,000 miles apart, to provide analysis. The first is Los Angeles-based journalist Kayla Knapp who writes for Fox Soccer. The second is Giancarlo Rinaldi, a Scotland-based Serie A expert who has contributed to the likes of the BBC and Football Italia.

Let’s start with a simple question: where exactly does Omar Gonzalez stand in his career?

Knapp: Omar Gonzalez is without a doubt one of the best defenders in MLS. Even though the 24-year-old tore his ACL in his left knee in January—an injury that kept him off the pitch for six months—he has made a fast recovery and returned to form with the Los Angeles Galaxy.

Giancarlo, could you tell us something we don’t know about Nesta?

Rinaldi: One of the great defending trilogies of Italian football history started with Gaetano Scirea, moved on through Franco Baresi, and ended with Alessandro Nesta. He inherited style, strength, and a sixth sense of anticipation from his illustrious predecessors at the heart of the Italy back line. He has achieved an enormous amount in the game. Without a series of niggling injuries he would probably have achieved even more.

Besides that series of niggling injuries, many hope Omar can carry on improving, but particularly gain that sixth sense. In fact, Gonzalez’s lack of composure and anticipation often stand out as weak points in his game, especially when compared to his strength and physicality.

Knapp: The 6’5’’ center back has his flaws. One of the biggest imperfections in his game is his first step. Gonzalez is an imposing force on the backline but struggles at times to contain speedy attackers at close range. If a ball is played in to the attacker and Gonzalez doesn’t have the proper positioning, he tends to find himself left in the dust. This isn’t a common occurrence, as he generally has very strong positioning, but when it does happen, the end result can be costly. Gonzalez must increase his quickness and agility, while also being more selective when he decides to step in on a speedy player.

Giancarlo, you bring up a very important distinction we must recognize. Alessandro Nesta is actually much smaller than he plays on the pitch. In reality, Omar Gonzalez is four inches taller than the Italian, so we have to proceed with caution when assuming Omar can achieve the same sense of fluidity in his movement. But this heightened center of balance shouldn’t discourage us too much, as Gonzalez certainly still has room to improve when it comes to reading the game and deciding when to lunge into tackle. So let’s go forth and strive for the definition of perfection once more.

Rinaldi: Always composed and classy, Nesta has the technical ability, vision and distribution skills you would normally associate with someone playing further up the pitch. Not everyone recognizes how committed in the tackle he is—as a youngster he broke Paul Gascoigne's leg in a Lazio training session.

To Gonzalez’s credit, he has done well to distance himself from a reputation as a half-hearted tackler. Like Nesta, when Omar goes into a tackle, there’s usually only one winner. But passing and an ability to retain possession are key components to the modern center back, and it has to be said that Gonzalez has been somewhat bi-polar. The vision and the passing is occasionally impeccable, but more often than not fatigue gets the best of Gonzalez, leading to rushed distribution and a flurry of intercepted passes and wild clearances.

Knapp: Gonzalez’s game needs improvement in his possession of the ball. When he tries to do anything with the ball that is more than a few touches, he tends to be dispossessed. His game would vastly improve if he can increase his technical skill when trying to dribble the ball.

While we cannot alter our height, there is plenty of reason to be optimistic about the future of Omar Gonzalez. Just as Nesta won Serie A with Lazio at the age of 24, the Galaxy defender—who recently turned 24—already has won the biggest trophy in American soccer, also earning the MLS Best Defender of the Year accolade last season. As his fitness and composure only continue to improve, it’s easy to see that—once the needless clearances come to an end—Gonzalez is on the cusp of becoming an indispensable asset to Klinsmann’s USMNT.

Eric Beard is founder of A Football Report. Follow him on Twitter at @BeardEric and send suggestions for future comparisons his way.