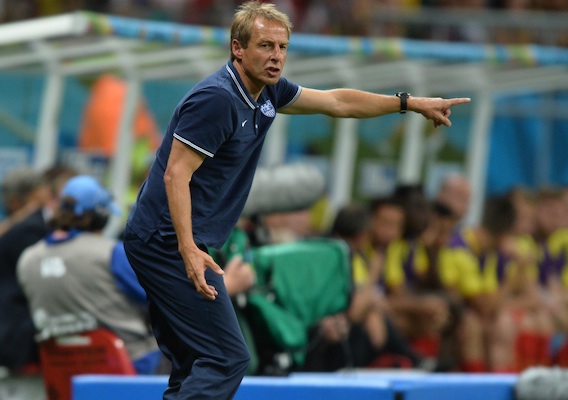 reading between the lines

What Jurgen Said About Brazil, and What We Heard

A day after the U.S. men's soccer team fell to Belgium in the 2014 World Cup round of 16, Jurgen Klinsmann spoke to the media about a variety of topics. Here's what he said, and what John Godfrey heard.
BY John Godfrey Posted
July 08, 2014
11:05 AM

Addressing the media in Sao Paolo

What Klinsmann said: "A big thank you to all of you, the way you approach everything very, very respectfully. A great relationship. We are all in this together, as we always say. We all try to make this game grow in our country and get it to the next level and working hard on it. It doesn’t mean you can’t have critical questions or critical comments. It’s all totally fine." What we heard: If anybody so much as mentions Landon Donovan's name, I'm going to clear the room.

On how to continue developing U.S. soccer

What Klinsmann said: “I think it’s hugely important for us to make the game grow, the players grow, and really find ways to improve on every front. Having next summer’s Gold Cup with that, hopefully being qualified for the Confederations Cup in 2017; in 2016 having an Olympics that is very, very important to us. We’ve got to do much better than the last cycle there. Having a Copa America in the United States, it’s pretty much the second biggest competition you can have. I understand the European Championship is huge, but Copa America is huge as well. Hosting that means a lot to us. That’s another huge platform to make the team grow, make players grow and obviously hopefully qualify for the Confederations Cup. Every year you have big benchmarks that you can approach. What we heard: I got us through the Group of Death. TV ratings are through the roof. I have my four-year extension. We have at least one major tournament every year from now until Russia. It's my way or the U-Bahn, everybody.


On the importance of Major League Soccer

What Klinsmann said: "The relationship with MLS is extremely important. It’s very good. We bounce so many things back and forth. We’re constantly communicating with each other. We’re trying to get on the same page more and more schedule-wise, which is important so we hopefully can get all the players that we need in order to be internationally successful.” What we heard: Twenty-five million Americans watched the Portugal match. We got more viewers over four games than MLS gets in, what, two seasons? If Don won't listen to me now, he never will. Of course, I can always "suggest" that his top Americans go overseas if they want a chance to play in Russia....


On helping players wherever they play their club soccer

What Klinsmann said: “We always said that if they play in Mexico, if they play in MLS, or if they play in Europe, our job is to help them to play to their highest capabilities, to reach their highest personal level. When we get the players, we will try to push them. I mentioned it many times, I maybe sound like a broken record—do we want them in the biggest clubs possible? Do we want them in the highest competitions possible? Yes. I think that’s just normal. It’s in every sport the same way. But no matter where they are coming from, if we are convinced that they have the potential and they have the quality to be part of the senior national team, we’re going bring them in no matter where they play and help them to raise the bar again.” What we heard: Matt Besler, Omar Gonzalez, and DeAndre Yedlin have a chance to play at the next level as a result of their work in the World Cup. They need to make it happen. Comfort, Schmomfort.

On Tim Howard’s performance against Belgium

What Klinsmann said: “I think it’s been a fantastic performance by Tim. He kept us in the game and he made it possible that we could have won this game or at least equalized in the last couple of minutes and go into a penalty shoot-out. Maybe it was the best game that he played in his career, but only he can tell us." What we heard: He gave everything he had for 120 minutes. A few others waited until we fell behind.

On how he can get the players to play higher up the field, toe-to-toe with top teams

What Klinsmann said: “I think it’s a mentality topic that we have to break through in a certain way because the interesting thing is every time we go down a goal, we shift it up. Then suddenly we build the pressure higher up and give [our opponent] a real good game. There’s still this sense of too much respect often. That’s why I try to play friendly games against European teams. Yes, you respect your opponent, but to leave that respect off the field and go and give them the real games. A good example was in Bosnia. We were down 2-0 at halftime and I told the guys, ‘You have a game here. You just have to take it. You Have to shift it up there, put them under pressure and they will be surprised.’ We turned that game around, won 4-3, and Bosnia after the game said, ‘Yeah, actually the U.S. can do that.’ So, it is still a mentality topic that we are working on: not dropping too deep, not giving the opponent the first move all the time. Once you concede a goal, what’s your reaction? Now you have to chase the game and suddenly we are capable to do it. We could have turned [the Belgium] game around in the last 15 minutes of extra time. Absolutely, we had enough chances to win it 3-2 in extra time. But why not do it earlier?" What we heard: Why not do it earlier?


On pushing the play

What Klinsmann said: "I believe it’s more a mental topic that we have to work on than it is a talent topic.” What we heard: Although I wouldn't mind having Eden Hazard and Thomas Muller on my team....

What Klinsmann said: “It had an impact definitely because he’s a big part of our spine. He’s a player that keeps two center backs on their toes, he can hold the ball and he gives Clint then more space and more freedom to roam around him and to get the whole game higher up the field. Not having Jozy was not ideal for us; it had an impact, but it’s not a complaint. It is what it is. Injuries happen to other teams as well, so it’s not at all an excuse, but definitely it had an impact.” What we heard: My biggest mistake of the tournament—I should have selected Terrence Boyd.


On increasing accountability of the players

What Klinsmann said: "It’s...more demanding on the players. Not just letting them get away with things, getting critical in certain moments, and make it clear that if you would have put that ball in the net yesterday, we would be in the next round. So think about that for a second without making it too harsh, but they need that sense of accountability, a sense of criticism, and people around them care about it. It’s good. We discussed that many times." What we heard: "Wondooooooooooooo!"

On increasing accountability across the entire program

What Klinsmann said: We all have different opinions. We all would play 11 different players from the beginning on, but that is good because it gives a sense of people caring about the game. This is what happens right now in the United States. Fans and the media, you care about it and you bring in your own opinions and different opinions that the coach or the players have, it makes them feel accountable and not just walk away from a bad performance and nothing happens. No. If you have a bad performance, people should tell you that so you can make sure the next game is not bad anymore and you step it up and be alert about that. This is the growth of the game in our country. People now are starting to care about it. Fans care about it. They comment on social media, they comment everywhere about it. And that’s good. We need to make this grow and make that continue, that they get a sense of that.” What we heard: Michael Bradley should not be the top-ranked player in the next ASN 100.

What Klinsmann said: “There’s no, ‘Thank you and bye.’ It’s always defined by performance, by what you bring to the table. I think there’s a good thing about going into the next year is that we have the opportunity to see a lot of young players come into our platform, into the senior team and we can give them time to show where they’re at right now." So the more experienced players, we can tell them now for the next couple of months, listen, ‘Play in your club environment. We know you inside and out. We know what you bring to the table.’ But, maybe right now for the next couple friendlies that come up and for the next year, we want to see the young players grow and see how far they can make it. Then obviously comes the Gold Cup. We want to go to the Gold Cup with the strongest team possible. Then it’s going to be similar to a World Cup or the last Gold Cup; we want to play our best team possible. What we heard: More DeAndre, less DaMarcus. And you won't be seeing Landon Donovan in a U.S. kit as long as I am in charge.


On the record viewing numbers in the U.S.

What Klinsmann said: “We are all very excited about that. We are excited seeing soccer breaking through or just getting a lot of recognition in the United States now. A lot of people being on TV and being at fan festivals and getting that connection to millions of people. The game has always been very popular in the United States. Millions of children play soccer. It’s popular in high school, college and the league now is a national league that does tremendously well being built 20 years ago, getting better and better. At the end of the day, like in every country, the locomotive of getting to the next level is the national team. The national team, whenever a World Cup comes along, it has to do well, it has to inspire the home country to jump on board. This team now inspired the fans back at home to jump on board and have fun, to enjoy those dramatic games that they saw and keep their fingers crossed and go through emotions positively and negatively. It has been huge what happened the last couple of weeks and the connection to the fans in the United States through you media people. They should be proud of that, the players should be proud of that and the fans should be proud of that too. We saw this building the last two, three years with the American outlaws coming with more and more chapters throughout the country. Our World Cup Qualifying games were all sold out, we had a huge response there. Our Send-Off games before the World Cup, we’re finishing them in Jacksonville in front of more than 50,000 people. That all shows you that soccer’s breaking through." What we heard: American soccer, NOW. That's what we heard. What did you hear? Tell us below! John Godfrey is the founder and editor in chief of American Soccer Now.