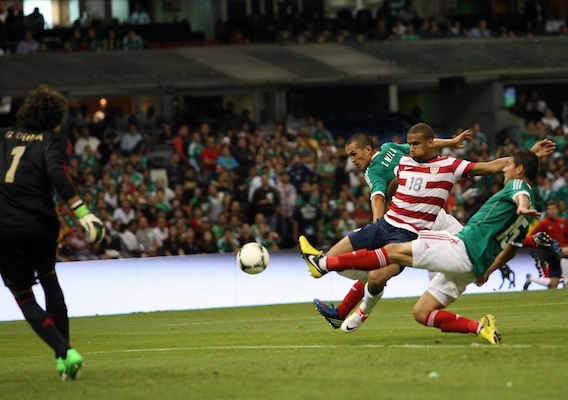 As part of this ongoing series, Will Parchman takes a stab at defining the four different types of American forwards—just in time for upcoming World Cup qualifiers against Costa Rica and Mexico.
BY Will Parchman Posted
March 14, 2013
2:27 PM
WHAT IS THE AMERICAN STRIKER? Is he possible to define? Does Jurgen Klinsmann even know? In response to these questions and more like them, I've devised four distinct categories that serve to shelve every American striker by class. Some fit in these categories more cozily than others. Chris Pontius, for example, meets criteria for three of the four. Clint Dempsey, who can nominally call himself a striker, fits none comfortably. But as an approximation it works to provide a guideline hacked out of the rough wood of our lackluster history at the position. It's also important to note that, except for perhaps The Ideal, none of these are necessarily better than the other. It's possible to be a Prototype and be just as effective as an Athletic Unknown. And vice versa. One might seem like a sexier option, but effectiveness doesn't work in those boundaries. How he chooses from within them will define much of what his team looks like for the next two World Cup qualifiers. It's important to know why. As we march toward Klinsmann's latest roster unveil this weekend, here's a breakdown of the prismatic pool of strikers has to draw from. And perhaps why it's been so difficult for him to find much consistency among its diverse denizens.

Chris Wondolowski, Will Bruin, Herculez Gomez, Alan Gordon
The U.S.'s bread-and-butter category. As a nation, we've produced more in the Prototype mold than any other by an extreme margin, and it's easy to see why Klinsmann has, sometimes strangely, leaned on this group as a crutch in uncertain times. It's an easy solution. Klinsmann values that which he can rely upon, and the flighty nature of The Athletic Unknown does not play well on his tactical sensibilities. The history of the American striker is the history of the Prototype. He is the potato of the American striker diet. Lacks curb appeal but still very necessary. The American qualities that have defined our strikers for decades — industry, back-to-goal, lead-footed, hard-nosed, capable, deficient in skill — were all born here. Knowing this, Klinsmann is always sure to include, typically, at least two in every camp, and at least one on every field of play. It's become increasingly rare to see him unleash an Athletic Unknown by himself, because the Prototype's ability to counterbalance his erratic behavior typically keeps possession from becoming wanton waste. The Prototype will never be a vogue choice amongst the average pub set. To untrained eyes it never looks like he's doing much, even on a good day. Others know better. Much like an iceberg, his activity is largely under the surface, getting into dangerous positions before his touch has a chance to let him down. To me, the easiest pick of this group is Gomez, the best American Prototype in the pool. The most interesting though is Bruin. His ceiling is not abnormally high, but he has the ability to grow into a serviceable role up top where he just scores goals. And lots of them. Americans want to ditch the Prototype, but I can still see its value. At this stage in our pool's development, developing sound Prototypes who specialize in sound goal-getting and little else is a wise gambit.

Chris Pontius, Terrence Boyd
Take all the values we just discussed and turn them up to their next decibel. This is not a historically common American breed, but the examples in world soccer are plentiful. The world's best right now is Robin Van Persie, but look no further than our cousins to the south to find the best example the U.S. soccer team faces on a regular basis; Chicharito. Highly technical, uncannily economical, tireless, and ruthless in front of goal. This is the most balanced category, and indeed, the one where Brazil's Ronaldo, probably the best all-around striker in history, resided. It is from the feet of 2.0's that World Cups are won. With that in mind, the American Prototype's 2.0 model is very much a work in progress. The best American to ever occupy this space was probably Brian McBride, which tells you how far off the global mark we are. Pontius largely reflects these values in DC, but his ability to do it on a national level is yet to be established. Giving him more opportunities to stab into dangerous areas with his array of skills would be wise, in my estimation. Boyd, on the other hand, is the pool's outlier. He is, to me, by far the most intriguing prospect at Klinsmann's disposal. His skill set is so varied, yet it's always buoyed around goal-mouth prowess. This, above all, carries his effectiveness. He's never too far separated from the thing that fully defines a striker: goals. His ceiling is perhaps as high as any American's in memory. Ideally, every pool accepts a 2.0 before anything else. He is the most proficient in every area. Looking at it through this lens, it's hard to imagine Boyd being consistently overlooked for XI's due to his age much longer.

Jozy Altidore, Juan Agudelo, Clint Dempsey, Eddie Johnson
The evolution of the American striker has more or less dumped us here. And, really, it's the path of least resistance along the wire. Take away some of the clinical in-the-box finishing and add flashes (however fleeting) of world class ability and you'll find the striker our pool is cranking out with more regularity than any other category. But can you rely on him? The general consensus is 'no.' My last column covered Jozy Altidore's progress, and we discovered that only now is he folding more traditional striker mores into his game, which has led him to flourish in the Netherlands. When added to his oeuvre, this makes him as dangerous as any striker in this pool. If you were Klinsmann, how difficult would it be to not bet on that dizzying talent unleashing itself in full force at any given moment? Because, as the title suggests, a vast amount of his strategic reserve is untapped. Altidore is one of the few unknowns on whom Klinsmann needs to keep rolling the dice. Dempsey's inclusion here is less about his inability to convert but rather the puzzling nature of his myriad deployments. His traditional use is wide left, his vogue use is in the hole and his most effective use purely in terms of goals is up top. Deployed high he'll tend to drift back anyway, but it's typically best to nail him to the top of your board and let him work. Agudelo, much like Altidore, has an array of physical tools, but he hasn't found an ability to uncork them yet. The troubling thing for Klinsmann to suss out is whether it's his duty to take on that challenge or rather that of the respective player's club. Klinsmann has overwhelmingly voted in the latter category, which does not bode well for Agudelo's playing time in meaningful matches in the immediate future. This can change in a flash. To me, the biggest lightning rod of the entire group is Johnson. His goal against Tigres in the CONCACAF Champions League at midweek was EJ in fifteen nutshells, the player bounding into open space, letting the ball run, and then cutting an impossible angle for a goal. It was all pace with just enough touch to get him through. This is the EJ Klinsmann wants to see, the EJ that sometimes gets miscast as a winger. What he does not show enough of is patience and restraint. Both are necessary tools, and EJ is often too willing to try the extraordinary instead of taking the workmanlike approach. He often overestimates his own power in attempting to pull off the former. Thus it shall always be with the most unpredictable of the unpredictable. Proceed with excitable caution.

Clint Mathis
Part of existing as an ideal is not really existing at all. There are a few countries who can point to a literal zenith at the position—Argentina or Brazil or the Netherlands, maybe—but for the vast majority of the world, the striker is a constantly improving notion. The general order of things is having successors who improve upon their predecessors in one way and not in another. What you lose with Conor Casey's ability to hold up play, you gain with Altidore's ability to take on defenders. Even a country like Brazil, which has produced two of the top five strikers of all time in Romario and Ronaldo, can reasonably expect to improve upon its ideal. This is never a finished product. Which brings us to the very notion of an "ideal." The term itself is so nebulous that it cannot carry over from one nation to another. If you're looking for a single all-around footballer to occupy this title, it has to be Ronaldo (the fat one). The pace, the technical ability, the hold-up acumen, the footwork—if Gerd Muller was the greatest goalscorer to ever live (a title Messi is challenging), Ronaldo is the best all-around striker the game has ever produced. He had everything. But, and I don't say this lightly, he's irrelevant for our purposes. Sadly, in the American narrative, it might be better if we forgot Ronaldo ever existed. It'd make life a lot easier. The ideal itself is not a shared cultural mindset or a player we've put on a global pedestal or even a shared cultural desire. It's the natural lineage of your player pool. The ideal is rooted in seen, shared experiences, and it grows from there. For this to truly be OUR ideal, this is the only way. Maradona set the Argentinian ideal with his irrepressible play as a second striker who dropped deep to create eddies of space, and then exploited them. It's easy enough to say Argentinians idolize Messi, but his game's proximity to Maradona and his ability to improve upon it is an endearing trait, one that is not lost on Argentinians. I can say my "ideal" is an American Messi, and that's OK I suppose, but it's not relevant. Which brings us around to one Mr. Clint Mathis. Cletus, as he was affectionately known, had as many tools as any player U.S. soccer has ever produced. He was uncannily calm with his shot, was a comfortable dribbler, and had a ruthless attitude that exuded "striker." No other American has been able to match his explosive array of ability. He is the bar that this pool will aim to correct. Whether that's Boyd or Altidore or someone else entirely, our ideal is still rising. It's up to Klinsmann to find him. Thoughts? Comments? Objections? Tell us below, please.