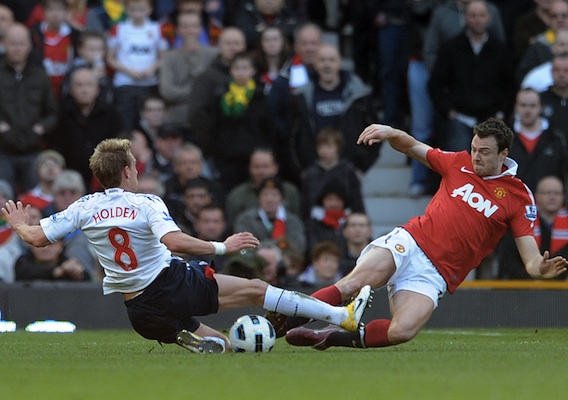 Keep tabs on the ASN 100 with Josh Deaver’s Monday updates. From Agudelo to Zusi, we will not only rank the best American players but also track their progress at home and abroad.
BY Josh Deaver Posted
January 14, 2013
4:54 AM
Graham Zusi—ASN rank #10
After spending a week on trial with West Ham United, the usual transfer rumors are swirling around the Sporting Kansas City midfielder. In a recent interview with ASN contributor Brian Sciaretta, Zusi says he expects to hear from the West Ham staff regarding their intentions soon, but is content to stay with Sporting KC unless a European transfer is the right fit for the 26-year old. In the same article, Zusi also had an interesting take on the difference between Major League Soccer and the English Premier League. Brad Guzan—ASN rank #17
The Aston Villa campaign reached a new level of futility on Saturday as the squad moved into the relegation zone following a 1-0 loss to Southampton. Guzan went 90 minutes in goal for the Villains, while Eric Lichaj was an unused substitute. After Southampton scored on a dubious penalty, Villa tried desperately to even the match, but their anemic offense, which has produced just 7 goals in 10 matches, failed to rescue a point. Winless in the EPL since late November and boasting the league’s worst goal differential, the Birmingham club currently sits with 19 points in the relegation scrap. Michael Parkhurst—ASN rank #19
With his transfer to Bundesliga side Augsburg complete, Parkhurst received his first minutes for the club in two preseason friendlies this week. On Wednesday, Parkhurst started and played 45 minutes in a 4-1 win against Hansa Ronstock. On Sunday, he came off the bench and played another 45 minutes in a 1-1 draw with Frankfurt. Augsburg currently sit deep in the relegation zone with only nine points earned on 17 matches, and have a substantial climb if they are to stay in the German top flight. In an interesting note, Augsburg press revealed this week that Parkhurst joined the club partially due to a recommendation from U.S. national team head coach Jurgen Klinsmann. Joe Corona—ASN rank #26
The American contingent at Tijuana continues to see minutes at the onset of the new Liga MX campaign. On Saturday, in a rematch of the Apertura semi-finals, both Corona and Edgar Castillo started and played 90 minutes in Tijuana’s 1-0 win over Leon. Castillo featured at left back and picked up a yellow card, while Corona played in a reserve forward role for much of the night, before being moved back into the midfield. The Xolos have started the Clasura campaign off with two straight victories. Fellow American Greg Garza was not in the 18. Stuart Holden—ASN rank #28
In his first competitive match in nearly 20 months, Stuart Holden made his on-field return for Bolton Wanderers on Tuesday. Playing 65 minutes for the reserve team in a 3-0 win against Oldham, Holden looked confident, but is still taking his road to a full recovery seriously. “It has been a long road but it is one in which I have maintained perspective and I have been taking it at the right pace. It is now important that I don’t get carried away at this late stage” adding, “I have worked so hard to get to this stage and I don’t want to do anything now to mess that up.” Following the performance, manager Dougie Freedman hinted to BBC Radio that Holden could potentially make his return to first team action on Tuesday, when Bolton take on Sunderland in a FA Cup replay. Mix Diskerud—ASN rank #33
Norwegian news outlet Adressa reported on Tuesday that Diskerud is very close to re-signing with Rosenborg. The club, which finished third in the Tippeligaen, has reportedly been in contact with Diskerud and expects the deal to be completed imminently. The article mentions interest from “other clubs,” including MLS’ Portland Timbers, but it seems likely that the 22-year old will remain in Norway for the time being. Juan Agudelo—ASN rank #43
Transfer speculation around a potential move to Celtic picked up this week after a Sky Sports article reported that the Scottish champions have made an offer for the Chivas USA striker. After the story broke, Agudelo retweeted (since deleted) the link, adding credence to the claims. Agudelo recently finished up a week-long trial with West Ham, whose reported interest, according to the Scottish Sun, initiated an official offer from the Hoops. In response, ESPN published a report stating that contract talks were “premature.” Regardless, it appears the 20-year old is primed for a European move during the transfer window. On Saturday, Agudelo flew to Carson, Calif., to begin a two-week stint with the U.S men’s national team. Luis Gil—ASN rank #54
The Real Salt Lake midfielder was among the 20 players called in by Tab Ramos for the U-20 training camp beginning Monday in Puebla, Mexico. The U-20 squad will train from Jan. 14-22 in preparation for World Cup qualifying later this month. They will also face Panama in two separate friendlies. Gil is a key member of a talented U-20 squad who hope to rectify recent U.S youth failures with a strong showing in Mexico. Michael Orozco Fiscal—ASN rank #68
After making just 10 appearances for San Luis in the Liga MX Apertura, Orozco has featured in the starting XI for Puebla in the first two matches of 2013. Playing alongside fellow American DaMarcus Beasley, the Mexican-American defender went 90 minutes at right back in Sunday’s 1-1 draw with Toluca. Will Packwood—ASN rank #96
The Birmingham City defender took another step on his long road to recovery this week, undergoing a third surgery in order to insert a metal plate into his leg. The U-20 defender sustained a devastating compound fracture last weekend in a match against Leeds United and currently faces 9-12 months out of action. Josh Deaver is a former academic turned soccer obsessive. Follow him at @USFootballGuy on Twitter.