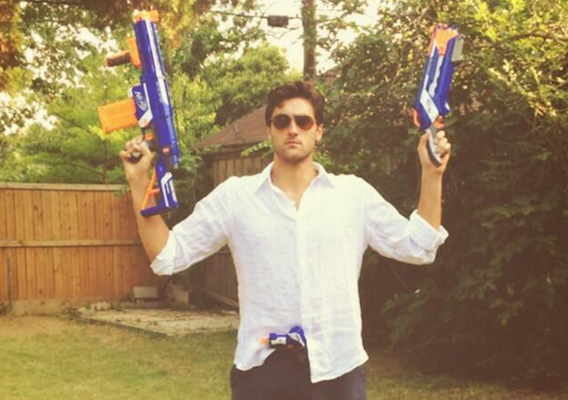 Welcome to the Gun Show with George John

The FC Dallas center back gets his Nerf on and has a message for Brek Shea. Elsewhere, Joe Gyau goes real talk, Heath Pearce talks about those three little words, and A.J. DeLaGarza apes Landon Donovan.
BY Jesse Yomtov Posted
July 07, 2013
10:47 AM
10. Sacha Kljestan: Ah, the good old days.

Ace Ventura 2 on TV right now… Jim Carey is the best, one of a kind.

Hard times you find out who your real homies are

8. Heath Pearce: Did this actually just happen to you?

Gettin down on some turkey burgers tonight. Uggggghhhhhhhh

LD must have been watching me take PKs in training lol. Big moment for him on his milestone. Congrats!

4. A.J. DeLaGarza: Never sure if this is flattering or insulting…

3. George John: Really rubbing salt in the wound there, George.

2. Mix Diskerud: And YOU couldn’t get a haircut while you were there, Mix?!

Weird... Walked by @JackMcInerney9 room and I heard whimpering.