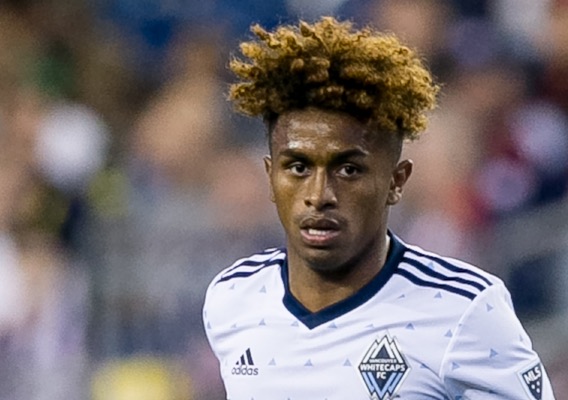 Vancouver Rises Out West, Lalas Lashes Out on TV

Somehow the Vancouver Whitecaps snuck up on the Western Conference frontrunners and now sit atop the standings. Also, U.S. soccer vet Alexi Lalas called out the current crop of national teamers.
BY Franco Panizo Posted
September 15, 2017
11:00 AM

WHILE EVERYONE thought the Seattle Sounders, Portland Timbers, and Sporting Kansas City were the biggest contenders in the Western Conference, another club quietly climbed its way up the table to move into the top spot.

That club? The Vancouver Whitecaps.

The Whitecaps jumped into first place in the west on Wednesday with a 3-0 victory at home over lowly Minnesota United. The comfortable win moved Vancouver to 44 points on the year, same as rival Portland, but the Canadian side has a slightly better goal differential. Oh, and two games in hand.

Overall improved play, particularly up front from the likes of Yordy Reyna and Fredy Montero, has been key in the Whitecaps’ good run of form. The club has lost just twice since July 5, and won seven out of its other nine matches during that stretch.

Vancouver will need to manage a short turnaround to win this weekend. The Whitecaps will host a well-rested Columbus Crew SC on Saturday and need to field a team that can match the energy levels of the visitors as well as limit a potent attack that includes Federico Higuain, Ola Kamara, and Justin Meram.

Atlanta continued to impress at Mercedes-Benz Stadium, scoring seven—yes, seven!—times in a shutout victory over the New England Revolution. Josef Martinez led the way with a first-half hat trick and four other players got in on the scoring fun as the club collected three more points in its quest to make the playoffs.

Playing for the third time in seven days, Atlanta United will next welcome Orlando City to town on Saturday afternoon. A packed house is expected at Mercedes-Benz Stadium, and the rocking atmosphere that will likely come with it should bode well for Atlanta given how well it has played thus far in its new home.

Gerardo "Tata" Martino’s men have outscored their two opponents 10-0. The attack has been ruthless and relentless, with the Designated Player trio of Martinez, Miguel Almiron, and Hector Villalba being just some of the players to stand out.

No angle is too tight for @JosefMartinez17.

Orlando City is entering the match with confidence after picking up a 2-1 win over D.C. United in Week 27, and will provide a challenge if only because Atlanta has to manage accumulated fatigue. Orlando may come out pressing in order to test what are sure to be some tired legs on Atlanta’s squad, and how the home side’s players cope with that might determine whether they continue to dominate at Mercedes-Benz Stadium or suffer their first letdown there.

Diego Valeri has been simply unstoppable as of late, and now is he on the verge of making history.

Valeri has scored in seven straight matches to tie the MLS record for consecutive games with a goal. The Portland Timbers’ playmaker is now seeking to make that mark all his, but in order to do so he will have to find the back of the net against a team he has not tallied against since 2013. What’s more is that the game comes on the road.

The Timbers are set to visit Rio Tinto Stadium to lock horns with Real Salt Lake on Saturday night, and need a win to avoid potentially falling further behind the Whitecaps for the Western Conference’s No. 1 seed. RSL is coming off a defeat to Vancouver but has been playing fairly well as of late and should provide a formidable foe for Valeri and Co.

IN NEED OF A RESPONSE

It was as bad as it could get for the Revolution on Wednesday, and now it has to muster up a response in order to keep its fading postseason dreams alive.

New England will visit Sporting Kansas City on Saturday and the squad is in desperate need of three points to not only restore some confidence following the midweek shellacking but also keep itself in the playoff hunt. The Revolution is six points below the red line in the Eastern Conference and has played at least one more game than most of the sides it is competing with, so anything less than a road win will likely spell curtains on its postseason aspirations.

Head coach Jay Heaps seemed well aware of that in Wednesday’s disaster in Atlanta, as he subbed off Lee Nguyen and Claude Dielna at halftime. While Nguyen and Dielna should be good to go for the weekend, Heaps has to figure out how to replace Xavier Kouassi and Antonio Mlinar Delamea after they were ejected following the use of Video Review in the first half of New England’s nightmare at Mercedes-Benz Stadium.

LET YOUR PLAY DO THE TALKING

Alexi Lalas made headlines this past week for his rant about U.S. men's national team players. Michael Bradley chose not to offer up much of a response to the pointed comments days later at a Toronto FC practice, and now his play will have to do the talking.

Bradley will lead a Sebastian Giovinco- and Jozy Altidore-less Toronto side against the LA Galaxy on Saturday in Carson, Calif. Toronto FC is currently breathing easy atop the Supporters’ Shield table, but losing to the struggling Galaxy could open the door for other teams to make a move. A defeat could also bring more criticism Bradley’s way, not only from Lalas but from critics everywhere.