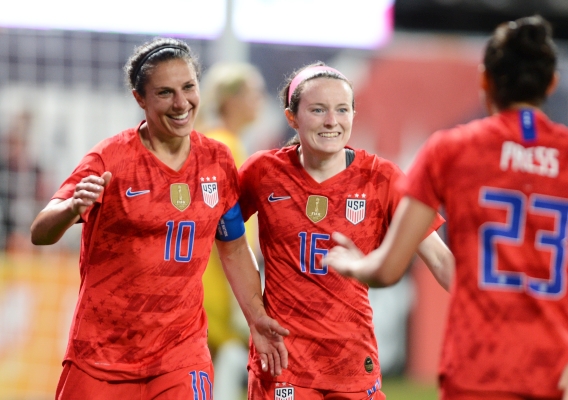 In its second World Cup send off friendly, the United States women's national team trounced New Zealand as it prepares to head to France. ASN's John Halloran is here with a report.
BY John Halloran Posted
May 17, 2019
8:00 AM
IN THE SECOND of three World Cup send-off matches, the United States women’s national team defeated New Zealand 5-0 on Thursday night in front of 35,761 fans in St. Louis.

The Americans got on the board twice in the first half when Tobin Heath and Rose Lavelle each tallied and then added three more in the second stanza via a Carli Lloyd brace and a goal from Sam Mewis.

At the start, head coach Jill Ellis fielded what most believe to be her preferred starting XI. Largely the same lineup from the team’s 3-0 win over South Africa on Sunday, the only two changes were Lindsey Horan and Megan Rapinoe—who have both been dealing with minor injuries—coming on for Mewis and Christen Press. Kelley O’Hara, also returning from a recurring ankle issue, started her second straight match, a good sign for a team light in depth at left back.

The team opened the match sloppily, struggling to string together passes or create much in the way of an effective attack. Then, 25 minutes into the half, the U.S. began to find some cracks and nearly tallied when Alex Morgan redirected a service from Crystal Dunn towards the far post. Unfortunately for the Americans, New Zealand goalkeeper Erin Nayler proved up to the task and made the save.

However, only 10 minutes later, Abby Dahlkemper found Morgan—this time with a lofted long ball out of the back. Morgan played the ball wide to Megan Rapinoe who fired a gorgeous service in behind the New Zealand backline. Heath ran onto the pass and tapped it home to open the scoring.


Pinoe with a pass so good that Tobin didn’t even have to nutmeg anyone. #TourDeFour pic.twitter.com/paGNlPh8et

For the next 10 minutes, the American attack hit full stride as the Football Ferns struggled to finish the half. Lavelle began to dominate play, popping up anywhere and everywhere for the U.S. She then added her tally in the 40th minute when she struck Horan’s lofted cross on the full volley into the goal to double the U.S. lead.


At the break, Mewis came on for Horan and asserted control of the midfield. In the 60th minute, Mewis’ run through the heart of New Zealand helped provide space for Heath out wide. Mewis then found Heath who put the ball back to the middle to Lloyd who was all alone in front of net. Lloyd finished the chance, scoring only 44 seconds after she had stepped onto the pitch.

Late in the half, the U.S. added two more with Lloyd striking again and Mewis adding one of her own with a hit from distance.

Overall, this was the second match in a row that the Americans started slowly. Perhaps this is a concern, perhaps it is a sign that the team is in a harder phase of training and more tired than normal for matches. More likely, the lack of sharpness simply represents the lack of urgency in a period after the final roster has been selected and too far from the team’s World Cup opener—three weeks from now—for the ultra-competitive U.S. players to truly began ramping up their play.

It’s also worth noting that the Americans earned their third straight shutout. Despite all of those matches being against a weaker level of competition, it is a positive sign and a confidence-booster for a defense that has struggled to put together 90-minute performances for the past year.

Mewis’ strong performance for the second match in a row—she also scored two of the team’s three goals against South Africa on Sunday—will certainly do nothing to quell the growing chorus that believes she should be in the starting lineup. The question for Ellis is who she would replace. Horan did not look particularly strong against New Zealand, but no one in the American pool has been stronger for club and country than Horan over the past year.

The more likely switch would be putting on Mewis for Lavelle. Yes, Lavelle has repeatedly shown a creative spark that the U.S. seems to need against weaker sides, but Mewis’ size and strength belies her own creativity on the field. Mewis can beat defenders on the dribble, split defenses with passes that few others can even see, and she can strike from distance.

Against stronger sides, Mewis would also add far more steel in the American midfield than the slighter Lavelle can provide.

Lloyd, who now has three goals of her own in the last two matches, is perhaps also starting to put some pressure on Ellis’ selections—or at least her substitution patterns.

Morgan has been the starter up front for the U.S. for years, albeit in different capacities. Formerly using her pace to get behind defenses, Morgan’s game has evolved and she’s proven herself indispensable as the team’s sole No. 9 in a different way. In the team’s 4-3-3 over the past three years, she now uses her physical strength to play the role of a holdup forward in transition, and finish chances in the attacking third. In that role, there hasn’t been anyone capable of challenging her for the position.

Lloyd, however, is still pushing for playing time despite many premature calls for the team to move on without her. She no longer plays a midfield role for the U.S., but has prospered by remaking herself as a forward. She is also the only one on the roster that can play the role similarly to Morgan, providing a physical presence in transition and finishing the chances created on the wings by her teammates.

Always fueled by naysayers and always at her best on the big stage, it’s not unfathomable that Lloyd once again plays a big part for the Americans at this summer’s World Cup.