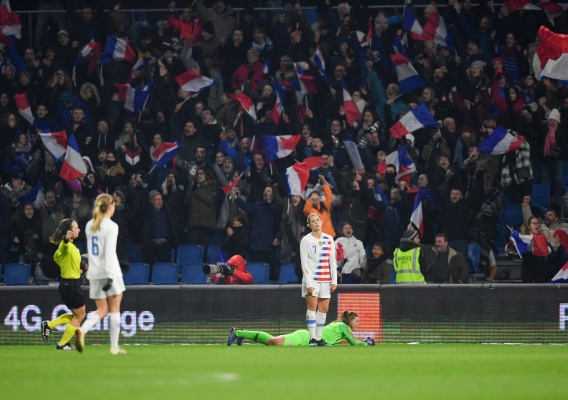 The USWNT lost its 2019 opener to France by a 3-1 scoreline but while it wasn't the result the Americans wanted, ASN's John Halloran says that it could turn out to be a blessing in disguise
BY John Halloran Posted
January 19, 2019
10:00 AM
THE UNITED STATES women’s national team lost 3-1 to France in Le Havre on Saturday evening, ending the American’s 28-match unbeaten streak.

The U.S. started the game without five regular starters. Megan Rapinoe, Julie Ertz, and Tobin Heath all missed the contest with minor injuries, Kelley O’Hara has not fully recovered from an ankle surgery this fall, and Rose Lavelle didn’t make it off the bench.

France gained the upper hand early, taking advantage of a comedy of errors in the ninth minute to pick up a 1-0 lead. On the play, Mallory Pugh gave away possession, Delphine Cascarino beat Emily Fox on the wing, and Morgan Brian missed a late challenge—and then fell down—before Kadidiatou Diana put the chance away.


Not the start the USWNT envisioned...

Diani starts France's attack brilliantly and finishes it for the 1-0 lead just 9 minutes in. pic.twitter.com/gDypSLq5o3

Ten minutes into the second half, Diani struck again when France quickly counterattacked off another U.S. giveaway. On the play, Diani chipped goalkeeper Alyssa Naeher for the goal.

In the 78th minute, France put the game away, again taking advantage after a lost possession. A quick pass put Marie-Antoinette Katoto in behind the U.S. center backs. Naeher came off her line a bit slowly and the French attacker rounded the American netminder before calmly slotting home.

The U.S. got one goal back late in the contest when a combination between Jess McDonald and Carli Lloyd allowed Mallory Pugh to sneak in for an open shot. Pugh quickly pulled the trigger on a left-footed effort which tucked nicely into the side netting past Sarah Bouhaddi.

Overall, it can’t be argued that the Americans played anything but poorly. The French attackers beat left back Emily Fox at will. Abby Dahlkemper had several poor giveaways, and Morgan Brian—slotted in as the U.S.’ No. 6 for the injured Ertz—proved to be utterly ineffective in controlling the middle of the field.

On the attack, Lindsey Horan and Christen Press provided a few moments of solid play, but overall, the team struggled to create anything but a handful of half chances.

Some will use the loss to begin the usual recriminations against head coach Jill Ellis and the tired narrative about a world that is catching up with the Americans. But the past 18 months, in which the U.S. has beaten all-comers—including Brazil twice, Japan twice, Canada twice, Germany, and England—has proved that belief wrong.

The fact of the matter is that the American players are just coming off their off-season, a period in which they haven’t played a competitive match for club or country in two months while the French players are in the middle of their European season.

And with so many starters out of the U.S. lineup, the play proved disjointed at best.

Still, the play of Becky Sauerbrunn and Dahlkemper in the back should have been better, and one wonders why Ellis put Fox—still a college player who is inexperienced at the international level—in a position to fail. Brian and Pugh also continue to earn chances, despite repeated poor performances.

Brian appears to be a shell of the player that shone so brightly for the Americans in the 2015 World Cup and with Ertz out and back-up McCall Zerboni also not fully recovered from her fall elbow injury, the U.S. midfield suffered. Why Sam Mewis has apparently fallen so far down Ellis’ depth chart remains an unanswered question.

The injuries to Rapinoe and Heath also revealed the lack of American depth on the wings. While Press played well, the U.S.’ 4-3-3 has succeeded because it allows Heath and Rapinoe to stay high and wide—in their natural roles. With either out of the lineup, the U.S. attack sputters.

Deploying Dunn in the center of the midfield also proved perplexing. The Americans certainly could have used her pace and experience in the backline against the excellent French attack and, again, Mewis could have easily slotted into the midfield.

In the end, however, a loss could be exactly what the U.S. needs at this stage of their World Cup preparation. With nine games left before the tournament begins, the defeat could help Ellis focus the squad over the next few months. After all, when the Americans took home the world title in 2015, the year began with a 2-0 loss to France in France.