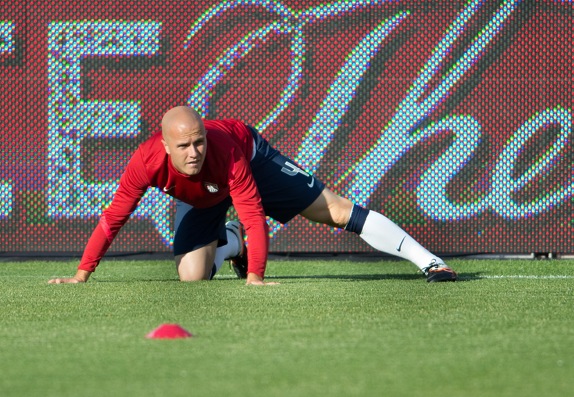 Major League Soccer and Liga MX are on hiatus, but there was plenty of American activity in Europe this past weekend. Here is ASN’s Monday fixture—a video-filled update on the nation's best players.
BY Josh Deaver Posted
December 10, 2012
5:14 AM
Michael Bradley—ASN rank #1
While the full value of the Roma midfielder doesn’t always translate to highlight clips, there is a reason he is the No. 1-rated American. On Saturday, Bradley put in an excellent 90-minute shift in Roma’s exciting 4-2 win against Fiorentina. The 24 year old played well defensively and sparked several Roma attacks, nearly scoring himself in the second half. The win puts Roma, who have won four straight, fourth in the Serie A table. Clint Dempsey—ASN rank #2
The Nacogdoches native is starting to deliver for Spurs. In midweek Europa league action against Panathinaikos, Dempsey provided an assist on the opening goal and contributed to the eventual game winner when his header hit the post and bounced off the keeper for an own goal. On Sunday, against Tim Howard and Everton, Dempsey scored with a deflected long range effort that was just out of reach of the American keeper. Dempsey now has 3 goals in 12 appearances this season. Sacha Kljestan—ASN rank #13
Since October Kljestan has been in top form for Belgian champs Anderlecht. Although they failed to qualify for the Europa league against Malaga on Wednesday, Kljestan delivered the equalizing assist in a 2-2 draw. In Saturday league action against Mons, Kljestan delivered another assist, his fifth in nine consecutive appearances. Anderlecht is comfortably atop the Belgian Pro League, which means Kljestan could see more Champions League action next season. Carlos Bocanegra—ASN rank #14
Four weeks after being sidelined with a hamstring injury, U.S national team captain Carlos Bocanegra may be close to rejoining his club Racing Santander in the Spanish Second Division. The injury, picked up November 14th in a 2-2 draw with Russia, forced Bocanegra to leave the game early in the first half. Terrence Boyd—ASN rank #15
For the fourth straight week, Boyd makes an appearance in the Monday recap. On Sunday, Boyd continued his blistering form, scoring a 51st minute winner in Rapid Vienna’s 2-1 victory over Wacker Innsbruck. Tied 1-1, Boyd got on the end of a lobbed pass into the six-yard box with an impressive sliding finish. With 13 goals in all competitions and four in the last five games, the young German-American is currently the most in-form striker on the U.S. national team. Jermaine Jones—ASN rank #16
In the final match of the Champions’ League group stage, Jones was subbed on and played 26 minutes for Schalke in a 1-1 draw with Montpellier. Schalke made it through to the round of 16, topping their group with 12 points. In Saturday’s Bundesliga tilt against Stuttgart, Jones contributed early with a 12th minute equalizing assist off an impressive pinpoint cross into the box. However, down 3-1 in the 73rd minute, Jones was sent off with what was, remarkably, the first straight red card of his career. Stuart Holden—ASN rank #29
It was reported this week that the former Houston Dynamo midfielder will return to full team training with English Championship side Bolton. It’s been a long journey after suffering two horrific knee injuries in as many years, but Holden has fought through the setbacks. When new Bolton manager Dougie Freedman was asked about a timetable for Holden’s return, he said “there will be absolutely no rush” to get him back on the field. Alejandro Bedoya—ASN rank #47
In what was likely his last game for Swedish side Helsingborg, Bedoya netted his third goal of the year in a 3-1 victory over FC Twente in the final match of their Europa League campaign. After being relegated to the bench during his time at Rangers, his August loan to Helsingborg has rejuvenated the young midfielder as he hopes to secure a transfer in the upcoming January window. Sean Johnson—ASN rank #53
It was reported this week that Chicago Fire starting goalkeeper Sean Johnson will take part in two separate week-long training stints with Stoke City and Everton. Fire head coach Frank Klopas said of Johnson, he “continues to improve and this season he demonstrated why he is one of the top goalkeepers in the country.” Johnson, who has trained previously with Everton, is hoping the extra offseason effort can him earn a spot in January’s national team training camp. George John—ASN rank #54
It was a disappointing season for the 25-year old centerback. After failing to secure a transfer to Europe early in the year, John returned to FC Dallas where his season was hampered by injuries. John recently signed a contract extension with the MLS club that will keep him in Texas until at least the 2014 season. John could be in line for some time with the national team, given that coach Jurgen Klinsmann often mentions him by name when discussing MLS prospects. Conor O’Brien—ASN rank #76
Much like Bedoya, Sonderjyske midfielder O’Brien will also be looking to secure a move during the January transfer window. In a Danish article published before Friday’s match against Brondby, it was revealed that the 24-year-old New Yorker would not be returning to the struggling Danish side. In his final match, O’Brien scored on a rebound when his 35th-minute penalty kick was saved. It is unclear where O’Brien may be heading, but it appears that there are possible suitors in Holland, Belgium, or perhaps a larger club in the Danish Superliga. Feeling upbeat about how Americans are performing overseas? Do you think Boyd is the real deal? Where would you like to see Bedoya land? Share your thoughts in the Comments below. Josh Deaver is a former academic turned soccer obsessive. Follow him on Twitter, @USFootballGuy, for daily updates.