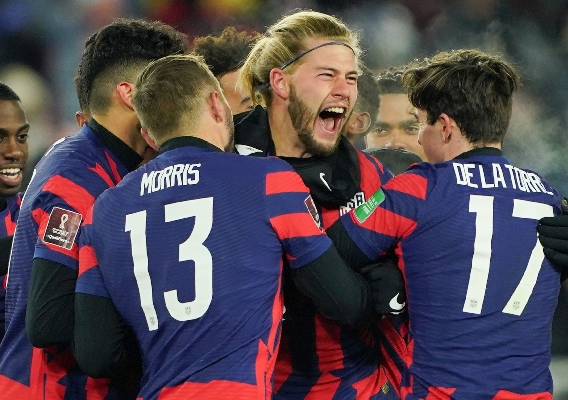 There are three things that are at the core of the USMNT's 3-0 win over Honduras in a World Cup qualifier in St. Paul: great midfield play, effective set piece deliveries, and frigid temperatures getting the most of a disinterested Honduras team. ASN's Brian Sciaretta breaks it all down
BY Brian Sciaretta Posted
February 03, 2022
12:05 AM

THE UNITED STATES national team got both the performance and the result it needed in Wednesday night’s critical 3-0 win over Honduras in World Cup qualifying. The decision to play the game in St. Paul was controversial and the cold front that arrived on gameday to bring temperatures around 0 degrees Fahrenheit only added to that. But in the end, Honduras withered in the elements and the U.S. team excelled. This made for a comfortable win for Gregg Berhalter’s team.

The starting lineup was also bold. Berhatler was already without Tyler Adams and Chris Richards, who were injured in the loss to Canada. The manager also elected not to start Christian Pulisic, Sergino Dest, Brenden Aaronson, and Yunus Musah. Instead, he started Reggie Cannon, Luca de la Torre, Jordan Morris, Kellyn Acosta.

When all was said and done, the lineup worked very well.

The U.S. team struck early in the 8th minute when Weston McKennie brilliantly headed home a free kick delivered by Acosta. That early goal seemed to take a lot of pressure off the U.S. team and the team was able to control the game. On the occasions where Honduras had the ball or won a corner, the U.S. easily defended.

Weston!! And the #USMNT finally scores on a set piece! Great header from the Juventus man! Nice delivery from Acosta! pic.twitter.com/weCCfaxxPN

The U.S. team took a 2-0 lead in the 37th minute when Acosta’s free kick found captain Walker Zimmerman in the box. The Nashville SC central defender collected the ball and fired a low shot past goalkeeper Luis Lopez for a commanding advantage.

In the second half, Honduras completely fell apart. The team made a trio of subs to start the final 45 minutes as players struggled with the cold and it only rarely was able to bring the ball into the attacking half. The U.S. team was always in control. Christian Pulisic came into the game in the 65th minute and scored two minutes later after a corner kick from Acosta was flicked on from Ricardo Pepi, grazing Zimmerman, and falling to Pulisic who hit an easy shot to the lower right of the goal for a 3-0 lead.

Another set piece leads to a #USMNT goal. This time Pulisic. It’s been the story of this game pic.twitter.com/stgXNzhyGN

From there, it was uneventful as the U.S. closed out a win. Pulisic had another goal called back because Brenden Aaronson was judged to have been offside ion the initial play.

With the temperature continuing to drop and the result of the game not in doubt, no stoppage time was given, and the U.S. team celebrated a 3-0 win. It capped a six=point window that was good, but not great. The final March window has the toughest games for the U.S. team and the table remains tight. This night, however, offered both some momentum and a brief respite ahead of very challenging three games in seven weeks.

Here are my thoughts on it all

The biggest story of the game was the midfield. Weston McKennie, Kellyn Acosta, and Luca de la Torre were the difference makers and the three best players on the field in this game.

Acosta delivered the best set pieces that the U.S. team had over the first 11 games of the Octagon. His deliveries resulted in all three goals and that was the difference in the game. But he also was strong in a lot of other areas – he was 55/64 with his passing including 3/5 in long balls and four key passes. He won 4/5 of his duels, was 1/1 in his tackling, drew two fouls and had an interception. 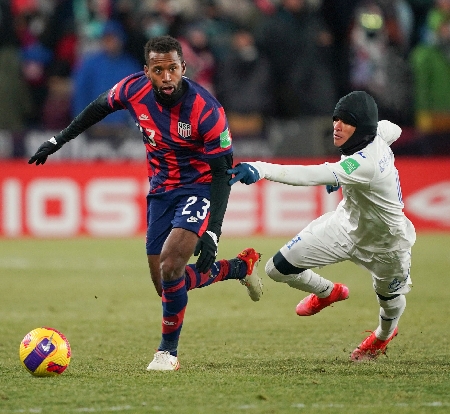 McKennie, meanwhile, scored the opening goal on a wonderful header. He was also very effective with his dribbling (4/5), and won 7/8 of his duels. He was the most dominating player on the field from the run of play.

Meawhile, Luca de la Torre had a breakout performance, and his highlights were his ability to quickly advance the ball up the field – both with his dribbling and his passing. He was always able to keep Honduras pinned back with his direct play. 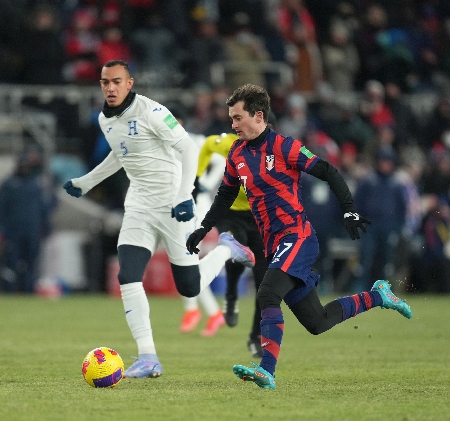 But this then raises questions about Luca de la Torre and his role going forward. Perhaps it might turn out that right now, he could be a better fit for the U.S. team than Yunus Musah. You don’t want to read too much into a game against a bad Honduras team, but de la Torre plays more week-in, week-out and might compliment the attack more. Maybe not, but it wouldn’t surprise me.

Everything worked out for U.S. Soccer. Tough conditions have a way of acting as a talent neutralizer. Why wouldn’t U.S Soccer want to host this game in California, Florida, or Texas and just let their talent win it out? This level of cold also risked injuries. None of this happened. The U.S. team didn’t pick up any injures, the U.S. team scored early to take away the danger of an upset, Honduras couldn’t handle the elements and crumbled. 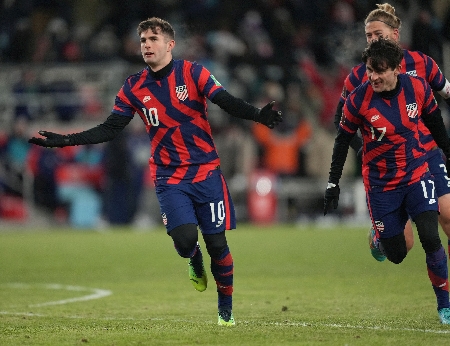 Was it fair? Yes. Honduras had starters who couldn’t continue but was this any different than when Bolivia plays a game in La Paz at 12,000 feet above sea level? Long-time American fans will remember when Guatemala decided to host a World Cup qualifier against the United States in 2000 in a jungle town of Mazatenango (120 miles from Guatemala City) in brutally hot conditions.

Is this the right thing to do going forward? Probably not. The risk for injuries in these temperatures is always higher and it is debatable why it is necessary against a team where there is a massive talent edge. Fortunately, the one March home qualifier is in Orlando and the U.S. team won’t have another home World Cup qualifier for seven years after that so this game will be ancient history.

The United States now has a four-point gap on a qualifying spot on fourth place Panama and a five-point gap on Costa Rica.

The issue for the U.S. team is that it has its toughest window ahead. At the time of the draw, it was known the U.S. team needed a healthy lead heading into the final window. Four points is decent, although it would have liked to have more.

The U.S. has never won a competitive away game against Mexico or Costa Rica. Now it has both those games ahead. Plus, Panama is playing very well and outplayed Mexico on Wednesday for long stretches in a 1-0 loss at Azteca. 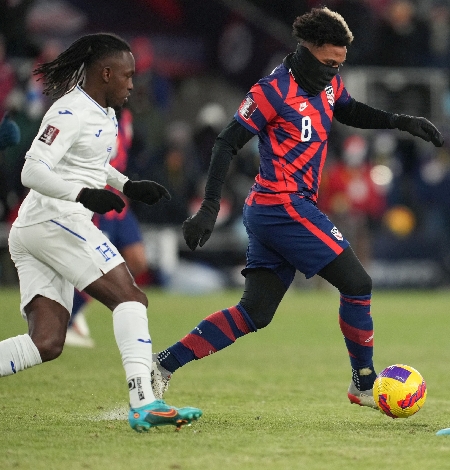 If the U.S. team loses to Mexico in the first game, it would set the stage for a game against Panama it will almost certainly need to win (a draw would not be enough). What the U.S. team also desperately needs is for Canada to win or draw against Costa Rica in the first matchday.

The U.S. team can only hope to be healthy and to have most of its core fit for these games. 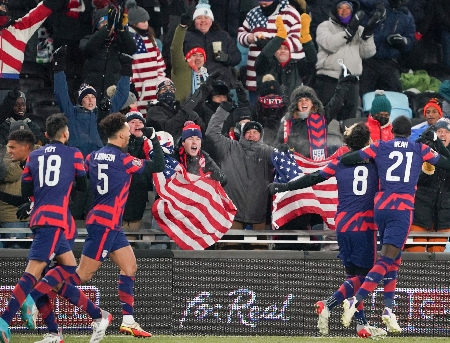 Matt Turner: The New England goalkeeper didn’t have to make a single save and touched the ball eight times. Rating: 5.5

Antonee Robinson: The Fulham left back helped the US team keep the offensive pressure up and had passes which led to three shots. Rating: 6.5

Walker Zimmerman: A very good outing from the team captain who was active in his set piece attacks. He scored the team’s second goal and was involved in the final. Defensively, he handled whatever Honduras sent his way. He did everything that was asked of him. Rating: 7.5

Miles Robinson: The Atlanta United was rarely pressed into defensive action and whenever he was, passed the test. Rating: 6.0

Reggie Cannon: The Boavista right back wasn’t an offensive threat up flanks too often but he combined well with Weah in the second half. Rating: 6.0

Kellyn Acosta: The new LAFC midfielder had the biggest impact on the game with his set piece deliveries resulting in all three goals. While he didn’t have the dribbling impact McKennie or de la Torre had, Acosta strong performance wasn’t limited to his set piece deliveries. His passing was very effective, and his passing range opened the game up. He also won almost all of his duels. Rating: 8.0

Weston McKennie: Was a key part of a midfield that just worked. His dribbling put Honduras on their heels and his fantastic header opened up the scoring and quickly set the tone for the game. He won his duels and did everything that was asked of him. Rating: 7.5

Luca de la Torre: Making his first World Cup qualifying start, de la Torre fit into the midfield like a glove. He was very effective advancing the ball into dangerous positions in the final third. His decision making and passing really made the attack click. Rating: 7.5

Jordan Morris: The Seattle Sounder had less of an impact than other attackers (only 23 touches over 65 minutes) but still had some nice moments in the second half when he was combining in the penalty area for chances. Rating: 5.5

Tim Weah: The Lille winger came to life in the second half and his combinations with McKennie were the highlight. He became tough to contain for a Honduras team that grew disinterested as the game wore on. Rating: 6.5

Ricardo Pepi: His three shots all had a high degree of difficulty with his best chance coming off an Antonee Robinson cross in the first half. In the second half, Morris played him a good ball which set him up for a chance which he fired wide. His flick-on header off Acosta’s corner helped with the third goal. He needs to be more dangerous but it wasn’t needed on the night. Rating: 5.5

Christian Pulisic: The Chelsea winger made an immediate impact, scoring the final goal two minutes after coming on to put the game out of reach. He was dangerous to close out the game and had a goal called back but Honduras gave up at that point. Rating: 7.0

Brenden Aaronson: The Salzburg helped the U.S. team continue to press and attack the final 15 minutes despite the game being out of reach. Rating: 6.0

Jesus Ferreira: Came on for the final 15 minutes but never really saw the ball. Rating: NR

Christian Roldan: A late cameo from the Sounder. Rating: NR