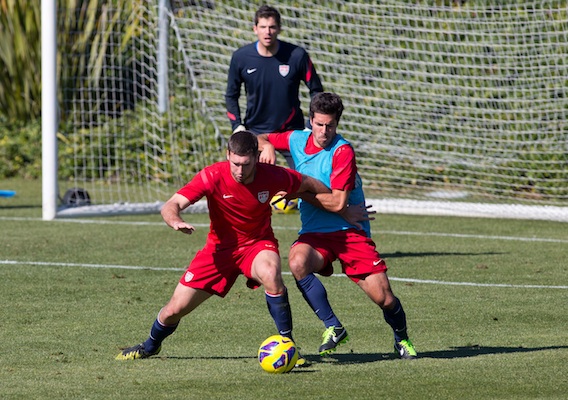 With the Hexagonal just nine days away, Josh Deaver's weekly report on the ASN 100 takes on heightened importance this week. The latest on Altidore, Cherundolo, Dempsey, Diskerud, and more.
BY Josh Deaver Posted
January 28, 2013
4:52 AM
Clint Dempsey—ASN rank #2
Dempsey found the score sheet yet again on Saturday, securing the lone goal for Tottenham in a 2-1 FA Cup loss to Leeds United. After Spurs conceded twice to the Championship side, Dempsey got on the end of a Gareth Bale cross with a looping header that found the back of the net in the 58th minute. The goal is Dempsey’s eighth of the season and his fifth in five games to begin 2013. Fellow American Brad Friedel played 90 minutes in goal for Spurs, looking a tad rusty in his return to the starting XI. Fabian Johnson—ASN rank #5
It just wouldn’t be World Cup qualifying without injuries to the U.S. backline. Before the weekend, German press indicated that projected U.S. national team starters Fabian Johnson of Hoffenheim and Hannover’s Steve Cherundolo are still nursing injuries only nine days out from the opening Hexagonal round match against Honduras. While Johnson appears to be day-to-day, Cherundolo has now missed three consecutive matches since the Bundesliga returned from its winter break. Jozy Altidore—ASN rank #8
Altidore added another tally to an already impressive season on Friday, playing 90 minutes and scoring in a 4-1 win over VVV. On a breakaway Altidore out-dribbled two defenders before pushing the ball past the onrushing keeper for his 15th Eredivisie goal in 19 league appearances. With 14 league games remaining, Altidore has already matched his goal output from last season and is currently only one strike behind Wilfred Bony of Vitesse in the Dutch Golden Boot race. With AZ upgrading their striking corps (more on that later), it seems likely Altidore will be a high-value transfer target this summer. Herculez Gomez—ASN rank #12
Gomez continued his excellent start to the Liga MX Clausura on Thursday, playing 84 minutes and picking up an assist in Santos Laguna’s 2-0 win over Leon. In the 58th minute Gomez set up Mexican international Oribe Peralta with a brilliantly placed downward header that bounced just past the outstretched arms of the Leon keeper. Santos currently sits fifth in the Liga MX table. Sacha Kljestan—ASN rank #13
The former MLS standout started and played 90 minutes on Saturday for the defending Belgian champs in a 2-0 victory over Lokeren. Now winners of 11 straight, the Purple and Whites have not suffered a league defeat since late October and seemingly have an insurmountable advantage at the top of the Pro League table. Displaying strong recent form, Kljestan seems likely to join the U.S. national team in Honduras for the first Hexagonal round contest next week. Mix Diskerud—ASN rank #33
Diskerud joined the long list of American players to be publicly challenged by head coach Jurgen Klinsmann. In an article that appeared on MLSSoccer.com, Klinsmann praised Diskerud’s flair and creativity, while commenting that his physicality needs to improve. “Mix brings a lot of qualities, but he also needs to learn to become more robust, to become more physical, to not be kind of just moving around and not getting into real battles.” ESPN’S Doug McIntyre reported that Diskerud has all but confirmed recent reports that he will return to Norway next season, saying, "I could very well be back with Rosenborg." Juan Agudelo—ASN rank #43
Following his three-week trial at Celtic, it appears the Glasgow-based club is still hoping to pick up the Chivas USA striker in the January transfer window. Without being definite, Celtic boss Neil Lennon indicated to local press this week that a deal could be in place by the end of next week. Chivas USA is currently the midst of a complete roster and identity makeover. Although coach Jose ‘El Chelis” Sanchez has praised Agudelo as a potential starter, it is unknown whether he is valued by the club going forward. Will Bruin—ASN rank #46
The Houston Dynamo striker scored two goals in Tuesday's closed-door scrimmage between the U.S men’s national team and a reserve squad for defending Liga MX champions Tijuana. The Yanks won 3-0, and Bruin hasimpressed Klinsmann throughout the camp. He will be hoping to earn his first cap in front of his hometown Houston fans on Tuesday. Tim Ream—ASN rank #51
Ream found his way back into the Bolton lineup in Saturday’s 2-1 FA Cup loss to Everton. Ream, who is receiving more playing time of late, started and played 90 minutes at center back and held his own. Continuing on his comeback trail, Stuart Holden also made a late appearance, playing 10 minutes in his first action at Reebok Stadium since March 2011. Aron Johannsson—ASN rank #59
The American-born Icelandic is apparently on his way to the Netherlands to join Jozy Altidore and AZ Alkmaar for a reported transfer price of $12 million. The move, which gives AZ much-needed depth at striker, all but confirms the club is expecting Jozy Altidore to leave soon after the Eredivisie season on transfer. Johannsson is eligible to play for both the United States and Iceland’s national team, but with qualifying approaching for both sides, has still yet to make any indication regarding his international future. QUICK NOTES
In a Saturday New York Times article, Andrew Keh reported that out-of-contract Alejandro Bedoya (#45) has received interest from as many as 15 clubs during this month’s transfer window. D.C. United standout Nick DeLeon (#50) has been called up by Trinidad and Tobago for a February 6th friendly against Peru. After suffering a recent shoulder injury, Joe Corona (#26) made his return to the Tijuana starting lineup on Saturday, playing 45 minutes in a 2-0 win over Pachuca. Tijuana has won four straight to kick off the Clausura campaign. Encouraged by how well Altidore and Dempsey are playing? Discouraged by the injuries to the two American fullbacks? Share your thoughts in the Comments below. Josh Deaver is a former academic turned soccer obsessive. Follow him on Twitter, @USFootballGuy, for daily updates.