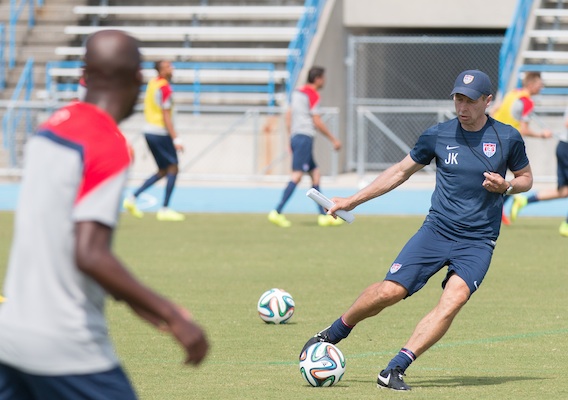 We asked 13 soccer pundits to tell us what they want to see from the U.S. national team in its final Send-Off Series match against Nigeria—and we asked them to do it in 100 words or less.
BY various Posted
June 06, 2014
5:58 PM
Brian McBride, former U.S. national team player
I'm interested in seeing continued improvement. Improvement from the first game to the second was evident, especially going forward. Attacking-wise, there was some really good stuff. Jozy and Clint in particular—one would drop deep, the other would stay high, continually moving Turkey's back four. This game is about solidifying the back. The one concern for me is the spacing between the outside backs and the center backs. On both sides, you need to make sure that back four is buttoned up.
Brian McBride will meet fans and sign autographs on Saturday outside Everbank Field at the Allstate Fan Zone. John Godfrey, ASN editor in chief
The time to experiment has come and gone—we need to see the first-choice squad Saturday. If that means Fabian Johnson plays right back and Timothy Chandler is on the left—ugh!—then so be it. If that means Aron Johannsson is relegated to the bench for Brazil—noooooooooo!—then do it, Jurgen. I also want to see some defensive discipline against Nigeria. Turkey came so close so many times at Red Bull Arena that it could have a confidence-crushing lopsided defeat. Buck up, backline! Simon Borg, MLSsoccer.com writer
Klinsmann and the players sounded insecure and unconvinced after their win vs. Turkey. Almost as if they had come to the realization that the tactical gamble of switching to a diamond had failed. More than anything else, the U.S. national team and its diamond desperately need an injection of confidence that could only come from a stellar performance against Nigeria. Without that positive reinforcement heading to Brazil, there's a chance their World Cup could be over (in their heads) before it ever starts. Mark Fishkin, Host, Seeing Red podcast
For the final Send-Off Series match, Klinsmann must settle on a back four in order to build chemistry. I was unconvinced that Timothy Chandler is the solution, so I’d play Fab Johnson-Gonzalez-Besler-Cameron in the back. Bedoya and Zusi on the wings, Jones and Bradley in the center, and Dempsey and Jozy up top. Look for Beckerman to spell Jones, Aron Bacon to sub for Jozy, and Brad Davis for Bedoya. Tomorrow will put a premium on speed, so luck for Fab to continue his overlapping runs and Jozy to hold and create for Deuce. This is it!

Jonathan Tannenwald, Philly.com soccer writer
I was at Nigeria’s game against Greece on Tuesday to do some advance scouting. From what I saw of the Super Eagles, they created chances from playing fast and direct, but they fired just about every shot six feet wide or high. So I can see Saturday’s game unfolding much like Turkey’s, where we think the U.S. back line gets let off the hook a few times. It’s a game the U.S. should win. But I can’t say that about Ghana, which is a much better team than Nigeria. So we’ll see what kind of test Saturday night really is. Dan Levy, National Lead Writer, Bleacher Report
I would like to see how Klinsmann handles the Timothy Chandler situation, and who he puts in front of Chandler will have a lot to do with that. If the left back is allowed to freelance as much as Chandler did against Turkey, it puts too much stress on the centerback—namely, Matt Besler—to have a midfielder on that side who isn't staying home. Davis and Chandler proved a bad mix from the start, and Green certainly isn't helping Chandler cover. Can Bedoya? Or is Beasley the better option in Brazil, despite his limitations on the offensive end. Blake Thomsen, ASN contributing editor
At this point, I'm less concerned about individual player performances than I am about seeing a presentable formation. Sure, it'd be great to see Jozy score and Besler work out the kinks. But the focus has to be on setting up a team that has a chance against three high-octane attacks. That means it's time to scrap the diamond experiment—a return to the trusty 4-2-3-1 is very much in order. Oh, and no injuries please. Marco Reus' ugly twisted ankle serves as a harsh reminder of the most important part of these friendlies—staying healthy. Daryl Grove, Host, Total Soccer Show; ASN contributor
I want to see the diamond again, because we need the practice. I want to see THE back four, meaning (right to left) Fabian Johnson, Geoff Cameron, Matt Besler, DaMarcus Beasley, and I'll be watching how well DMB keeps up with Victor Moses on that wing. I want to see a little experiment with Beckerman back at the base of the diamond, Bradley at the tip, Zusi and Jones on the sides, to see if we can get Jones and Beckerman in the same team. Finally, I want to see Jozy score—so that I can sleep at night.p> Matt Swift, ASN social media director
Time for the Klinsmann shenanigans and tinkering to stop and for the U.S. to get down to brass tacks. Let’s roll with Bedoya/Beasley on the left, Zusi/Johnson on the right, and give Jozy a half to act like somebody. If Jozy isn’t up to scratch, park him on the bench and give the IceMan a shot. Let’s see if this diamond can shine against a fast Nigeria squad. If not, let’s pawn it for something more realistic. All I’m looking for against Nigeria is a determined, cohesive squad that looks like they belong at the World Cup. Daniel Karell, contributor, Soccer by Ives
I'm looking to see Jurgen Klinsmann select his best XI to play against Nigeria on Saturday night. I'm expecting to see Fabian Johnson stay at RB, DaMarcus Beasley back on the left, and the U.S. again play a 4-4-2 diamond, with Zusi and Bedoya as the wingers. I am expecting a big night from Jermaine Jones and Michael Bradley to dominate in the middle of the park against John Obi Mikel and Ogenyi Onazi. Noah Davis, ASN deputy editor
Look like a team that can compete at the World Cup. Azerbaijan and Turkey were building blocks; the game against Nigeria is, too, but Jurgen Klinsmann has said that he picked Saturday's opponent specifically for the likeness to Ghana. I'd like to see the backline lock down the Nigerian attack, the midfield—specifically Michael Bradley and Jermaine Jones—impose its will on the proceedings, and the attack (hey, Jozy Altidore) generate some chances and put those chances away. We're getting pretty close to not-effing-around time, so let's stop effing around. (Also, another sick Fabian Johnson volley would be welcome.) J. Pat Miller, WTMJ-AM - WLWK (FM) in Milwaukee
Can Jozy be dangerous around the goal? He was so hot during qualification, scoring streak and all, and then he went ice cold overseas. If Jozy can even become a shadow of his potential then everything else may fall in line. Question: If you had to bet the house on Jozy's World Cup scoring total would you go over/under ONE? Josh Deaver, ASN contributor
Rather than focusing on specific players or formations, the Americans need only one thing against Nigeria on Saturday: consistency. In its final match before departing to Brazil, a complete 90-minute performance with a determined defensive effort, dynamic midfield movement and finishing up front would be far more encouraging than the substandard and, ultimately, disjointed wins against Azerbaijan and Turkey. Personnel wise, expect Klinsmann to maintain recent status quo with the lineup. However, given this is the last chance to experiment; can we see 90 minutes of Aron Johannsson just once? Oh yeah, and no injuries. OK, your turn now. You have 100 words to tell us what you want, and the Comments section below is open for busines.