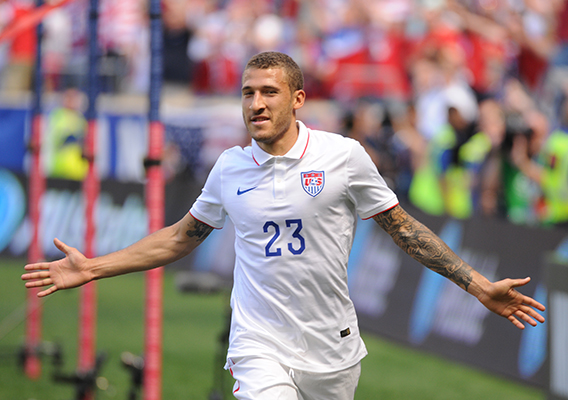 The Stars and Stripes take a lead into the half after 45 up-and-down minutes. Both the U.S. and Turkey had plenty of opportunities but only Fabian Johnson managed to get one by the goalkeeper.
ASN Slideshow

BY Noah Davis Posted
June 01, 2014
2:53 PM
HARRISON, New Jersey—It's a perfect day at Red Bull Arena with the American Outlaws in full voice behind Turkey's goal in the south end of the field. They were never louder than when Fabian Johnson opened the scoring in the 25th minute, volleying home a beautiful lob from Michael Bradley. It was the defender's first goal for the United States national team. It's surprising the game stayed scoreless for so long as both sides had numerous chances in the early stages of the wide-open match. Former Red Bull star Jozy Altidore, who looked much sharper than he did during the match against Azerbaijan, found the back of the net after a quarter hour, only to see Tunisian referee Slim Jedidi whistle a foul. Turkey peppered the American net with shots, failing to beat Tim Howard. The breakthrough came on a cheeky give and go. Johnson, playing right back, found Bradley about 25 yards from the net in the center of the field and continued his run into the box. The midfielder deftly chipped the ball over the Turkish backline and Johnson cooly drilled it into the side netting. Other observations: