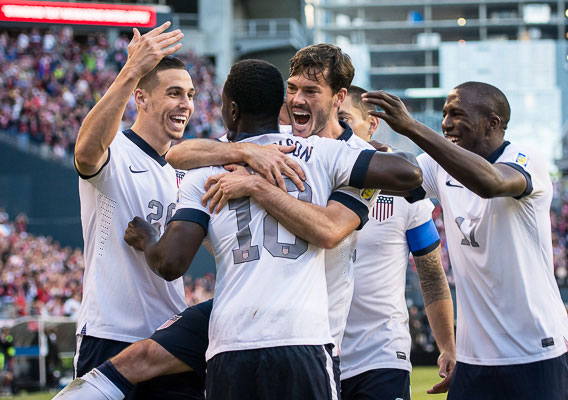 It was the rarest of U.S. national team victories—a laugher. And with the thorough dismantling of Panama, the United States took first place in the Hexagonal standings.
ASN Slideshow

BY John Godfrey Posted
June 12, 2013
12:02 AM
THIS WAS THE MATCH American soccer supporters had been waiting for, hoping for, expecting. Despite missing half its starting midfield, the United States dominated Panama, 2-0, in front of a jubilant, boisterous crowd in Seattle. American Soccer Now has three people on the ground in Seattle—Liviu Bird, Jon Arnold, and Mike Russell. They are chasing down quotes and photos right now, so check back in a short while for their detailed match reports, analyses, and photojournalism. In the meantime, there's plenty here to keep you busy while they do their thing. For starters, we want you to leave your Player Ratings. We will post yours alongside those of our editors and other prominent pundits. And don't forget: Honduras awaits. We've got the scoop on the coach, the team, the players, the tactics, and more. It's all on our highly clickableHex channel. Have you taken our latest poll? We think you should. It's on the lower left of this page. And our ASN Matrix asks you to graph your feelings about the national team. Do it now when you're in a good mood! And if you just cannot get enough of the United States men's soccer team, we strongly encourage you play around with our insanely interactive ASN 100. Post-game pieces coming up soon. Don't be a stranger.