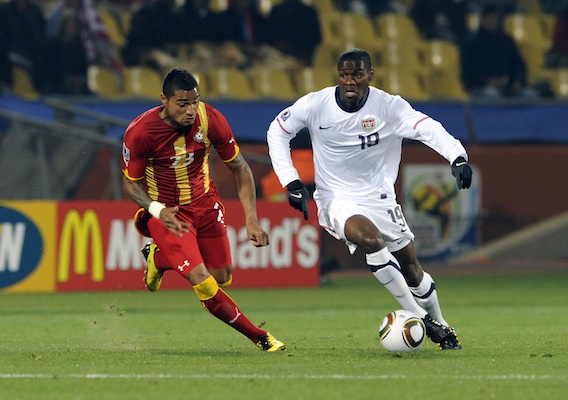 U.S. vs. Ghana: An Early Look at the Key Matchups

Yes, we know the all-important showdown with the Black Stars is still more than a month away. We don't care. We want to obsess over it now. And so do you.
BY Blake Thomsen Posted
May 06, 2014
5:33 PM
IT'S NEVER TOO EARLY to start thinking about the World Cup, and since we know that it all gets started for the U.S. on June 16 vs. Ghana, we decided to put together this preliminary match preview. (If you still need to familiarize yourself with Ghana's players, coach, history, or tactics, please do so now. Otherwise, read on. ) In this first part of a recurring series, we’ll take a look at how the U.S. and Ghana match up in key areas, focusing on each team’s strengths and weaknesses.

Ghana No. 1 keeper Adam Kwarasey has now played the past seven seasons for Stromsgodset in Norway. Kwarasey is one of the Norwegian league's better keepers, but it's still safe to say that he may be the weakest link in a strong Ghana side. It will be of utmost importance for the U.S. to test Kwarasey as much as possible, so it might be worth trying more shots from distance than usual to see if he spills a dangerous rebound or two.
Advantage: United States (by a wide margin)

This is another area in which the U.S. has a decided edge, attacking through the middle of the Ghana defense. Sumaila and Akaminko are relatively fast for center backs, but they are largely untested and have only played together a few times. Dempsey, Altidore, and whoever else joins them in the attack can take advantage of their relative inexperience. Dempsey drew a penalty against Ghana in the last World Cup, and doing so again is not out of the question against Sumaila and Akaminko. The former conceded a penalty against Egypt in the qualifying playoffs, and he’ll be tested again and again by the U.S. in June. Go to the 2:15 mark to see Akaminko foolishly clatter into Ahmed Hamoudi in the box. One last note: Ghana’s fullbacks are better than their center backs, so there’s even more incentive for Michael Bradley to join the attack through the middle of the field. We’ll see if Klinsmann sets up a team which allows Bradley to do so.
Advantage: U.S.

When these two teams met in 2010, the U.S. could not compete with Ghana’s power and quality in the center of the pitch. Four years later, Sulley Muntari and Michael Essien (who wasn’t fit for the 2010 matchup) have declined in form, while Michael Bradley has progressed from a young upstart to North America’s best player. Bradley will look to get in behind Essien and Muntari and wreak havoc on the inexperienced Ghana backline from an advanced central position—with the form he’s in, this shouldn’t be too much of a problem. However, each time Bradley gets forward, he’ll leave the U.S. that little bit more vulnerable to Ghana’s trademark counters, which often come through the center of the pitch. Like Muntari and Essien, Jones is a touch past his prime, but he still brings plenty to the table. His Champions League experience and veteran qualities should make him a better fit alongside Bradley than Ricardo Clark was back in 2010. The X-factor may be Jones’ old Schalke teammate, Kevin Prince-Boateng, who devastated the U.S. with a fine solo goal back in 2010 (don’t watch if you’re squeamish). Prince-Boateng has a combination of pace and strength that works really well in the frenetic tempo of World Cup matches. Stopping his driving runs from the tip of the center midfield trio will be essential if the U.S. wishes to keep Ghana quiet. Doing so will require considerable positional discipline from Jones, who will need to shield the back four all game long. Does Jones have it in him? As good as Michael Bradley is, it’s still slightly more likely for Ghana to win this area of the pitch, especially due to its probable 3-2 numerical advantage in the middle.
Advantage: Ghana (barely)

As good as Geoff Cameron has been at right back for Stoke City, he’ll have his hands full with Juventus’ Kwadwo Asamoah, who may well be the best player for either team. Asamoah can run for days, and he also brings considerable skill on the ball and quality crossing. As you’ll see in the video below, he prefers to drive the ball on the ground across the box—U.S. defenders will have to be on top of their game to make sure he doesn’t pick up an assist or two. Ghana will look to funnel most of its attacking down the left side, so it’s of utmost importance that Cameron be sharp for all 90 minutes. Klinsmann should also consider Asamoah when naming his right midfielder. Alejandro Bedoya is probably physically best suited to dealing with Asamoah, and that might be enough to get him into the starting lineup. Along with Prince-Boateng and Asamoah Gyan, Asamoah is one of the main men in this Ghana side. Shutting him down will be essential in slowing down Ghana’s high-octane attack.
Advantage: Ghana

American fans know all too well what Asamoah Gyan can do. His well-taken goal in extra time knocked the U.S. out of the 2010 World Cup, and the 28-year-old will be looking to do more of the same in Brazil. Note the buildup for the goal in the video above. It’s completely non-existent. A Ghana defender just hoofs a ball clear and Gyan pounces, using his rare combination of speed and strength to fend off Carlos Bocanegra and Jay DeMerit before firing an unstoppable shot past Tim Howard. The U.S. center backs will have to be on red alert all game to make sure they don’t fall victim to a similar fate. Matt Besler has been sharp for the U.S. since taking over as a first-choice center back, but he is a bit undersized and may struggle to deal with Gyan’s physicality. Omar Gonzalez seems a good matchup physically, but can he stay switched on and error-free for 90 minutes? Clarence Goodson’s positioning is typically excellent but he’s not the type of elite athlete who’s all that well suited to deal with Gyan’s athleticism. Geoff Cameron is a candidate as well, but he has played almost exclusively right back for two straight years for Stoke. It’ll be a tough call for Klinsmann to make, but getting the central defense pairing right likely will be vital in determining the game’s outcome.
Advantage: Ghana

Tim Howard actually comes into this World Cup in his best statistical form (for Everton at least) since the 2008-09 season. That’s bad news for Ghana attackers, as an in-form Howard is capable of singlehandedly winning games. Howard has a save percentage of 75% and 14 clean sheets, both tops since that 08-09 campaign. If the U.S. backline can limit Ghana’s good looks at goal, Howard could very well deliver his second career World Cup shutout.
Advantage: U.S. We’ll have tons of in-depth coverage as the World Cup gets closer, certainly, but this is a preliminary look at how the two sides match up. Though Ghana is the least glamorous of the U.S.’s Group G opponents, this is the game that could be most important in determining the Yanks’ World Cup fate. The two sides match up pretty evenly, but by taking advantage of Ghana’s shaky defense and goalie, the U.S. could find its route to success. What do you think Ghana’s biggest weakness is? What should the U.S. try to exploit? Who do you think will win? Let us know in the comments section. Blake Thomsen is a frequent ASN contributor. Follow him on Twitter.