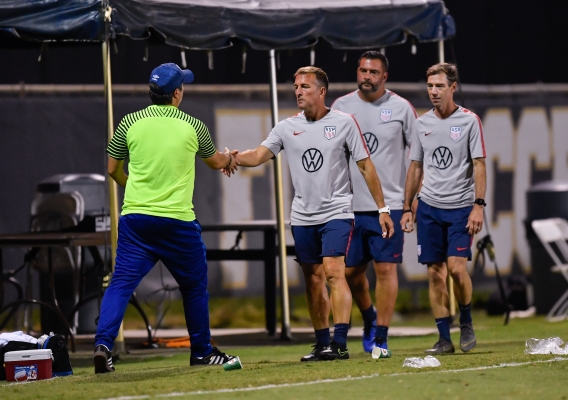 The recent U-23 camp was decidedly mixed in its performances with a 1-0 loss to a very talented Brazil team and a 4-0 win over a last-minute replacement in the Canary Islands. ASN's Brian Sciaretta looks at the good and bad.
BY Brian Sciaretta Posted
November 17, 2019
7:00 PM
THE UNITED STATES U-23 team recently completed its November camp in Spain that was mixed, and at times rocky. With Olympic qualifying four months away, the U.S. team completed its 2019 schedule with a 1-0 loss to Brazil and a 4-0 win over a Canary Islands select team.

The team will now head to January where it will have an extended camp for preparation. Then it could possibly have one more additional camp in either February or the end of March which will serve as its final tune-up.

If this camp was about player evaluations, it was very important and it offered some clear lessons.


On Thursday, the United States lost 1-0 to a Brazil team loaded with very, very expensive players. There is no shaming in losing to a team of that talent, but the U.S. team did not put up much of a fight – particularly in the first half.

Playing the typical Gregg Berhalter-style, the U.S. struggled to play out of the back and Brazil’s press was very effective. The goal happened when Hassani Dotson became isolated and turned the ball-over with little help surrounding him. Brazil moved quickly into a dangerous position and beat goalkeeper Matt Freese with a shot that was savable.

In the second, several adjustments helped. In the midfield, Christian Cappis and Brendan Aaronson did well in the midfield but it was still Brazil that had the upper hand.

The 4-0 win over Canary Islands


The 4-0 win over the Canary Islands saw the U.S. team put on a very average performance with significantly changed starting XI. This game should have been the loser of Argentina and Chile but with Chile not able to send a squad, the Canary Islands U-25 select team was an emergency replacement.

The quality of the match was not good and the U.S. at times played down to the level of a very weak opponent. It wasn’t until the 56th minute when the U.S. took the lead via a goal from Sebastian Saucedo, who wore the armband.

The scoring was rounded out with Brooks Lennon scoring in the 60th minute and again in the 84th minute. Richard Ledezma scored the finale in the 87th minute on a cross from Antonee Robinson.

The good news with that much competitions is that players have to perform well, or else they can be replaced. Head coach Jason Kreis has plenty of options.

In this case, Djordje Mihialovic struggled immensely against Brazil. He wasn’t able to make plays and frequently turned the ball over. He has put himself into a position where he could get cut once Pomykal returns from injury or Jackson Yueill drops down to the full national team.


Left back Sam Vines also had a bad performance against Brazil – which frequently targeted his side as opposed to Aaron Herrera who was far steadier on the right side.

The problem with Olympic qualifying is it is uncertain which players will be released. The ideal option at left back is Antonee Robinson, who has been an established starter for three seasons. If he is not released, Chris Gloster would also be a competent selection.


Central defense remains a steady area of this team. Justen Glad had some good moments and some bad moments against Brazil. Mark McKenzie was mostly solid. Chris Richards had a high level of potential and Cameron Carter-Vickers is vastly experienced despite Stoke City’s brutal start to the Championship season.

Those four remain in contention to make the qualifying team but Miles Robinson will likely replace one of those four – and whether or not Carter-Vickers or Richards are released could decide which one.


Using a similar roster makeup of previous tournaments, here is what the team could look like in a 21-player roster with two goalkeepers.

Based on this camp and previous camps, that is one potential roster. Still there are so many variables that could throw it off. The issue of releasing players jeopardizes seven players in Sebastian Soto, Christian Cappis, Alex Mendez, Richard Ledezma, Chris Gloster, Cameron Carter-Vickers, and Antonee Robinson.

If they are not released, it would open the door for players like Mason Toye, Keaton Parks, Brandon Servania, Djordje Mihaiolovic, Sam Vines, and others.

There is also the concept of roster augmentation. Will CONCACAF allow teams to make changes to their rosters for the all-important knockout games that are typically held during the international window. This is what happened during the CONCACAF 2018 U-20 World Cup qualifying tournament. It allowed Tab Ramos to add Chris Richards, Sebastian Soto, and Sergino Dest for the big games at the end.

If that is allowed, it possibly gives Kreis the chance to add some of the big guns of this age group – Tim Weah, Josh Sargent, Sergino Dest, Tyler Adams, Weston McKennie, and even Christian Pulisic. It is extremely unlikely a majority of these players participate in Olympic qualifying but the possibility of adding one or two is realistic – especially of there is roster augmentation.

Overall, it was a subpar window for the U.S. team but one that allowed for proper evaluation heading into the January camp. Despite the difficult results, this team should be able to compete well in CONCACAF. But with the region only getting two teams in the Olympics, the margin for effort is razor thin.