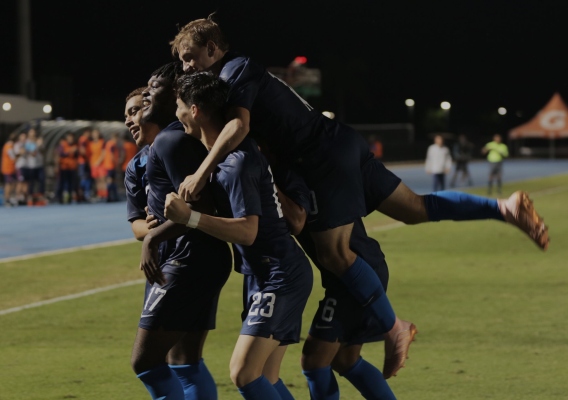 U.S. U-20 team advances to the CONCACAF final after downing Honduras

The United States U-20 team has already qualified for the World Cup but now after a 1-0 win over Honduras, it has set itself up for a clash against Mexico in the CONCACAF final. Here's a look at the win.
BY Brian Sciaretta Posted
November 19, 2018
7:45 AM
THE UNITED STATES is through to the CONCACAF U-20 final for the second consecutive cycle after defeating Honduras 1-0 in Bradenton, Florida on Monday night. That sets up a match with archrival Mexico for the title on Wednesday.

The game itself was poor but most of that was because of the circumstances. The United States had already qualified for the 2019 U-20 World Cup and needed a win or a draw to advance to the final.

Honduras, on the other hand, needed a win to reach the final but was far more interested in avoiding a four goal defeat – as anything better would qualify it for the World Cup.

The result is that Honduras offered very little going forward, constantly played with as many players as possible behind the ball, and routinely faked injuries. This happened throughout the entire 90 minute – including the final 40 minutes when Honduras trailed 1-0.

All of this made for an unappealing and unexciting game but one that saw both teams succeed in their objectives. The United States is in the final and Honduras earned a spot in the World Cup.

The U.S. team was not nearly as sharp as it was in Friday’s 4-0 romp over Costa Rica bit it got the result it needed. The goal was very nice and it came in the 51st minute when Brandon Servania sent a ball over the Honduras defense that slightly deflected to Ayo Akinola. The Toronto FC attacker hit a low shot to the far post for the game’s only goal.

Next up will be an enticing encounter against Mexico in the CONCACAF final. The Mexicans advanced to the final after coming back from a 0-2 deficit to Panama to draw 2-2. With the first two tiebreakers even, Mexico earned a spot in the final having accumulated just one yellow card in the second stage compared with Panama’s two. It is not a total loss for Panama, however, as it also earned a spot in the U-20 World Cup.

There is no doubt the U.S. U-20 team has been on an ascent under Tab Ramos. It has qualified for two straight World Cup quarterfinals and will now be going for its second straight CONCACAF title. Next May will be the fourth straight World Cup appearance under Ramos.

The United States backline with Sergino Dest at right back, Chris Gloster at left back, and a central defense combination of Chris Richards and Mark McKenzie was very good. Yes, Honduras rarely pressed too far into the U.S. side of the field but whenever it did, the U.S. backline was confident and in control of the situation.

With this backline, the U.S. team can beat a lot of teams, even when its midfield was struggling.

In recent cycles, the U.S. team has thrived with solid central defenders. This team is not deep in central defense but McKenzie and Richards have enormous potential next year at the U-20 World Cup.

At fullback, Gloster has been a workhorse. He has rarely put in a wrong foot defensively and he is smart about when to get forward into the attack. Similarly, Dest is the best U-20 right back since DeAndre Yedlin in 2013.


Ayo Akinola still has some holes in his game that he needs to work on but there is no denying that he has a nose for the goal and gets himself into very dangerous positions. When he replaced the injured Ulysses Llanez in the first half against Costa Rica, he did well. While not as technical as Llanez, he played to his strengths well and scored the team’s final goal with a first-rate header.

Tonight, Akinola was dangerous on multiple occasions. In the first half, he was in a dangerous position on a cross but his header go just wide. He later set up Soto for another big chance which was missed. He then made a very nice run and finish on the goal.

Akinola has certainly made the most of his chance at this tournament.

If the United States wants to defeat Mexico on Wednesday, the midfield must play better. Granted, Mexico will not bunker the way Honduras did but the U.S. team can certainly have played better.

Servania has had a great tournament and assisted on the goal against Honduras, but he still made too many errant passes. Mendez has also been perhaps the best player in the tournament on any team but was very quiet against Honduras. Frankie Amaya tried but was unable to break the game open on several occasions.

This tournament has been especially grueling without much rest between games. In the first stage, the U.S. team had five games in nine days and then after a week off, the U.S. team will have three games in six days for the second stage.

When you combine the overly physical and sometimes nasty style of play in CONCACAF and combine it with poor officiating, and a ridiculously condensed schedule, it is unfair to expect beautiful soccer every game. This tournament is a slog.

The U.S. team has already achieved its first objective. Let’s see if there is anything left in the tank on Wednesday. Don’t be surprised if the adrenalin of playing an archrival with a title on the line gives a huge boost of energy.