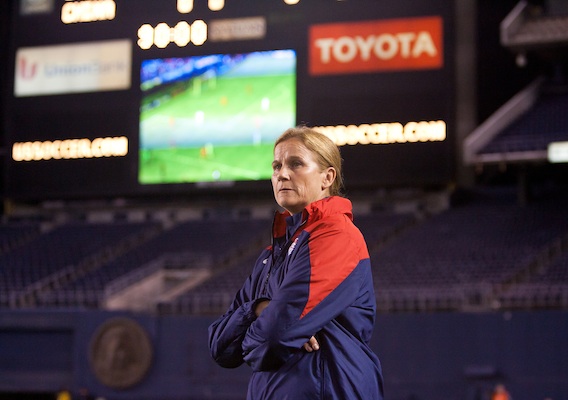 Jill Ellis, 47, had the interim tag removed from her title and is now the head coach of the United States women's national team. She will be expected to deliver strong results at next year's World Cup.
BY John D. Halloran Posted
May 17, 2014
9:32 AM
ON FRIDAY U.S. Soccer president Sunil Gulati announced the hiring of Jill Ellis as the next coach of the United States women’s national team. Ellis had been the interim coach of the team since April, following the surprise firing of former coach Tom Sermanni. Via conference call with the media on Friday afternoon, Gulati bluntly laid out the expectations for Ellis, saying “The job description is to win next summer.” And considering the short trigger U.S. Soccer had with Sermanni—who went 18-2-4 as a head coach before being let go—Ellis will be under immediate pressure to win. But Ellis heads into the job with open eyes and says she’s not intimidated by U.S. Soccer’s lofty standards. Also speaking to the media on Friday’s conference call, Ellis said, “I know the expectation—embrace the expectation.” She added, “When you work for U.S. Soccer, it’s about winning gold medals and being on the first-place podium.” The hiring of Ellis brought about mixed reactions from U.S. players and the fan base. Current players Alex Morgan and Carli Lloyd were the first to publicly declare their support for their new coach, as was former U.S. women’s coach Tony DiCicco—who was also a candidate for the job this time around.

Congrats to Jill Ellis! We are in good hands and looking forward to starting our journey of qualifying for the World Cup! #canada2015

Congratulations to Jill Ellis. Delighted to have an American Coach again. Good luck WNT as they prepare for Canada 2015!

But some fans are worried that the selection of Ellis will leave the U.S. relying on old tactics—namely a long-ball style that emphasizes the U.S.’s dominant athleticism and ignores the technical and tactical evolutions made by teams like Japan, France, and Germany. Ellis tried to address those concerns on Friday, saying, “First of all, I have an appreciation for the game. I love to see the game played in an aesthetic way.” She added, “For me personally, being able to keep possession, create more chances, and build from back to front through the midfield is very, very important.” She did, however, acknowledge that the U.S. would be willing to play direct when needed. “I also recognize we do have unique qualities," Ellis said. "The counter is going to be part of our weaponry.” Ellis’ record as a coach has also been an area of concern for some fans. On the positive side, her successes include being an assistant on the 2008 and 2012 Olympic teams that won gold medals and leading UCLA to the Final Four in eight of her 12 years there. Critics of Ellis, however, point out her failures as a head coach, which include the U.S. U-20 team crashing out of the World Cup in 2010 to Nigeria—not exactly a world powerhouse in women’s soccer—and the fact that she never actually won a national championship with UCLA.

So, the coach known best for coaching the team that bombed out of the 2010 U20 Women's World Cup...#firerongen #promoteellis

Gulati—as one would expect—gave Ellis his full support. “In Jill, we have someone who knows our program, who has been extraordinarily successful, has coached the team very recently with success and we’re very, very confident in her abilities to lead the team forward.” He also cited Ellis’ past work with U.S. Soccer, saying “Jill’s got all of the right credentials, both in terms of experience and how she relates to the players. She gets top marks in all the work she’s been doing on the technical side with all of our programs."It’s ability, it’s leadership, it’s experience, it’s success.” And considering the fact that World Cup qualifying is only five months away, with the actual tournament to follow eight months after that, another change for the U.S. anytime soon is extremely unlikely. Ultimately, Ellis, and Gulati’s decision to change horses at this stage in the process, will be judged by the team’s performance in Canada next summer. For her part, Ellis is ready to get started. “I’m a soccer coach," she said. "I can’t wait to get this group together and get on the field.” John D. Halloran is an American Soccer Now columnist. Follow him on Twitter.