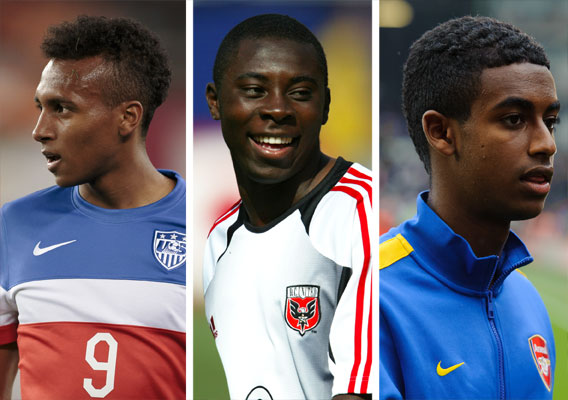 U.S. Soccer and the Teen Phenom: A History Lesson

American soccer fans are desperate for a savior, and they have been for more than a decade. Here, Will Robinson looks back at some teens who were burdened with huge expectations early in their careers.
BY Will Robinson Posted
May 08, 2014
10:56 PM
BEFORE LAST MONTH'S MEXICO friendly, I had not watched Julian Green play one minute of soccer. I hadn’t even seen Gedion Zelalem on a pitch. And unless you’re a fourth-division German soccer fan, Arsenal youth squad enthusiast, or a thoroughly obsessed U.S. supporter, there's an excellent chance you hadn’t either. All of the reports sound promising for Green, including A) his scoring rate for Bayern Munich's U-23 squad (15 goals, 23 appearances); B) the fact that Pep Guardiola played Green (albeit in garbage time) during a Champions League match; and C) the German national team expressed enough interest to call Green to train with its U-19 squad. So it certainly appears as though Jurgen Klinsmann pulled off a major coup in convincing Green to play his international soccer for the U.S. instead of Germany. While Zelalem hasn’t officially switched sides, he’s reportedly seeking U.S. citizenship, the first step in playing for the Stars and Stripes. It also seems there’s some trepidation in crowning Green the Next Big American Thing given our nation's history of young studs fizzling, dissipating into the soccer ether. Just about every candidate to “save” U.S. soccer has disappointed in one aspect or another. So why have they failed? How, with all the hype and infrastructure and opportunities, did few wunderkinds excel and most flame out, stoking fan’s dreams before having them harshly extinguished? Here’s a partial list of would-be stars, attacking players one and all, who were forced to lift a heavy burden early in their careers—they were all labeled game-changing prospects with the potential to put American soccer on the international map. They are listed below in descending order of hype. We excluded players before the 2002 World Cup cycle, given the lack of academy infrastructure and training facilities/programs to cultivate talent.

Freddy Adu was Major League Soccer's poster child long before David Beckham considered life in Southern California, joining D.C. United at the age of 14, appearing 30 times, scoring five goals, and notching three assists. Against grown men. In his first season. At 14. Adu chose going pro in America instead of enlisting in Inter Milan’s academy under his mother’s advisement. Adu was everywhere, from The Late Show with David Letterman to Total Request Live and even 60 Minutes. His Q-score was off the charts—far higher than any other American soccer player. He also performed well for the youth national teams, scoring tons for the U-17s and U-20s, including captaining the U-20 World Cup squad to the quarterfinals in 2007, which, in hindsight, was one of the federation’s youth best teams in history. Michael Bradley and Jozy Altidore also played on that side, but Adu led the way—feast upon the 6-1 demolition of Poland and the skill Adu displayed. Post-D.C., Adu spent a season at Real Salt Lake before hopping to Portugal’s Benfica. What follows is an impressive record of not playing for five clubs in four countries over as many seasons. He played no more than 11 times at each stop, which included AS Monaco, Belenenses (Portugal), Aris (Greece) and Çaykur (Turkey). For his 90 some-odd minutes played in the 2011 Gold Cup, Adu sparked the sputtering U.S. attack, garnering hockey assists for the Clint Dempsey/Costa Rica goal in addition to the Landon Donovan/Mexico finish while also assisting on Michael Bradley’s header against El Tri. But an MLS stint with the Philadelphia Union and Peter Nowak’s inexplicable dealings impeded any progress or vital signs shown that summer, his last appearance for the national team coinciding with Bob Bradley’s. The cord was cut, and Adu’s career flatlined. His downfall? Hubris, possibly. Who knows where he could be now had he played with Inter’s U-18s or U-20s? (Granted, that one’s more on his mother, for not wanting to send her 12-year-old son overseas.) His defense is either atrocious or non-existent. In today’s game, that’s tactically implausible and inexcusable. He played just twice in Brazil’s Série A last season. Maybe making $550,000 per year at age 14 made any lesser salary seem unpalatable; no team would copy Philadelphia and make Adu a designated player these days. He’s the poster child of unfulfilled hype, potential, and expectations. Is he one of the U.S.’s best 23 players? No way. But is he one of its best 23 talents? A case can be made, and that makes him one of U.S. soccer's greatest disappointments.
Bottom Line: A debilitating hit to the talent pool.

Donovan is the best-ever player to lace up his boots for the United States. His play is/was never sexy—he doesn’t have the dominant physical attributes of Cristiano Ronaldo or Lionel Messi’s deft skill. But as Brian Phillips wrote, he’s the mercurial, often-candid star the U.S. got. Donovan latched onto Bayer Leverkusen early, signing at six-year deal at 17 before returning to MLS. In his prime, he could run past just about any defender who sized him up, finessing his way into an optimal scoring opportunity for either himself or a teammate. Accordingly, he holds national team records for goals and assists. He scored against Mexico at the 2002 World Cup and was honored as the tournament’s best young player. But more was always wished for Donovan. He appeared seven times for Leverkusen but was ultimately sold to the Los Angeles Galaxy. His Bayern Munich loan spell in 2009 consisted of six appearances. The unconquered land of Europe would remain as is. Clint Dempsey and Michael Bradley flourished in two top-flight leagues before returning to MLS, but one can’t help but imagine the possibilities if Donovan had felt more comfortable plying his trade in England or Germany on an ongoing basis.
Bottom Line: Great success, but the “what ifs?” will linger

In U.S. soccer’s modern era, O’Brien was the original savior. A product of the Ajax youth system, where he began training at 17, O’Brien lept to the senior side in 1999. He played a significant role in the Dutch giant’s Eredivisie-winning 2001-02 season. Of all non-keeper Americans abroad, O’Brien was the most prominent and productive American ahead of the 2002 World Cup. He was electric and calming in the middle, pairing beautifully with Claudio Reyna. But injuries piled up on O'Brien, and never relented. From 1998 to 2006, between club and country, the Los Angeles native played about four seasons worth of games. He returned to the States and suited up for Chivas USA in 2006 but logged just one appearance, then decided to retire. Unlike others on this list, O’Brien reached his potential, or something approaching it; it's just that his body could not sustain it. What hurts is that we may be seeing this play out to an extent with another American talent—Bolton midfielder Stuart Holden, who has suffered knee injury after knee injury after knee injury, unable to remain on the pitch.
Bottom Line: His star shined brightly but burned out fast.

Many of these stories follow a similar path: early success derailed by injuries. It’s a “Mad Lib"—just fill in different names and jerseys and years. And to some extent Quaranta fits the bill: five goals and an assist in his first season with D.C. (what’s with United taking all these young kids?) in 2001, where he among others on this list led MLS’s “youth movement." Struggling through injuries, he rallied for the 2005 season, scoring five goals and tallying five assists in 18 appearances. But Quaranta's tale veers off in a different, darker direction. In the middle of his short career, Quaranta turned to drugs, notably OxyContin and cocaine, telling The Washington Post, “There weren’t enough pills in the world for me. You could have put me in Iraq and I would have found a way to get pills. I should have been dead a long time ago.” He tested positive in 2006 and sobered up the following year. Though he recovered and completed a few strong years in D.C., it was too late. By then he had thrown away a spot on the 2006 U.S. squad that fell flat in Germany, and his international career was over.
Bottom Line: The most tragic story of the bunch.

Before DaMarcus, there was Jamar, the first of many high school phenoms to join MLS. Sports Illustrated called him soccer’s Kobe Bryant, more for shared circumstances than skill. But this Beasley had his first crack at American soccer, starting in New England. With quotes like, “He's got the technical ability of a Brazilian player, the speed of an American sprinter, and the mental speed and toughness of a Western European player” from then-coach Thomas Rongen, people were excited. After four, at best, mediocre, seasons in New England, he joined his much more successful brother in Chicago for a season. After that? Poof. No more Jamar. He turned to indoor soccer and futsal to try to resuscitate his career—to no avail. In 2010, Sporting KC signed him and subsequently paid him $40,000 to… do nothing. Early in his career, he turned to excessive drinking and partying with some Boston Celtics, including Paul Pierce, and “stumbled into practice either hungover or maybe still slightly drunk, gradually eroding any confidence or patience a club could ever have in him,” leading to his Revs departure. This year you should be able catch Jamar in some Major Indoor Soccer League action while DaMarcus thrives in Mexico, expected to be on the United States' 2014 World Cup roster.
Bottom Line: A self-proclaimed cautionary tale of wasted talent.