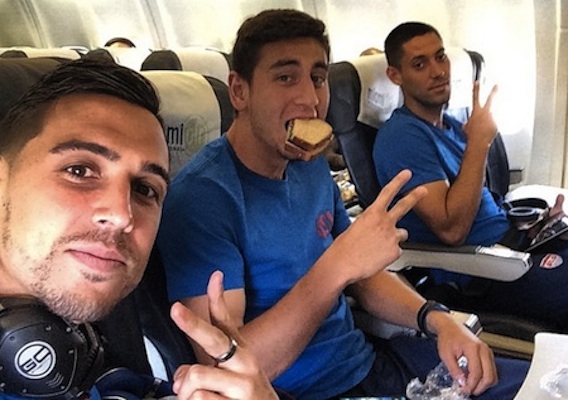 U.S. Players Turn to Social Media Ahead of World Cup

I looked it up, he wasn't joking.

Free lessons for all single males. THE Fabio is at Whole Foods Bellevue killin' the game right now. Ladies flocking like ducks after bread.

No questioning his loyalty.

Some peace signs before they do battle.

He's bringing the drone to Brazil? So awesome and, um, how does Jurgen feel about that?

I was hoping my drone would fly by some topless women instead of a topless gzusi ... http://t.co/rsNVMZMzn6

They like soccer, tattoos, and long runs on the beach....

Not a bad place for jog! pic.twitter.com/ZnuxqXRMW9

He will have plenty of time to hone his skills after retirement.

I do love golf but I am for sure sticking with day job. 130 yards away is way too far I need to be 18 yards and in.

Missed it by that much.

The American Outlaws will drive circulation up this week....

Fantastic tifo from the American Outlaws in New York.

NY has been better than I imagined. This topped the whole experience - @AmericanOutlaws pic.twitter.com/WdRR9hbIwV