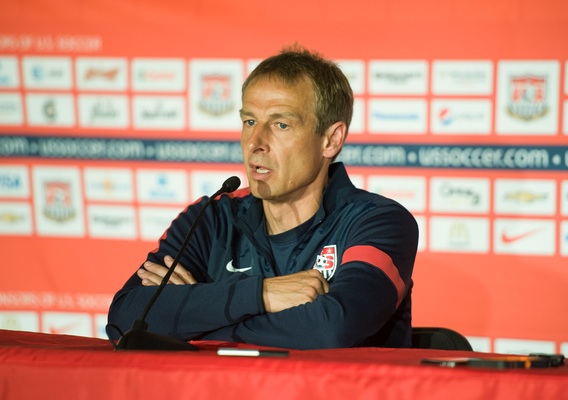 It was an odd game. With a number of starters sidelined, Jurgen Klinsmann ran out Brad Evans, DaMarcus Beasley, Eddie Johnson, and a 4-2-3-1. Here's the ASN take on the individual performances.
BY Josh Deaver Posted
November 15, 2013
7:35 PM
HEAVY CHANCES. SLOPPY PLAY. It certainly looked like a meaningless friendly. Inside one of the grandest venues in world football, the U.S. men’s national team and Scotland put on a quiet display in a scoreless draw on Friday. It was poor, but fulfilling their function as a test run for Brazil 2014, some players within Klinsmann’s roster made a shout for future involvement, while others may have hurt their stock. The first half lacked, well, everything. Despite leading in possession and having some successful passing spells, the Americans failed to create anything substantive, or even get an attempt on the Scotland goal. Pinned back early with a high Scottish line, the abundance of central players constantly jammed the lanes, choking the Americans in the midfield for the opening period. At half, Klinsmann felt the squad played into Scotland’s hands. "We want more urgency, more tempo. We adjusted to their rhythm and that's not good for us,” he said through the U.S. Soccer Twitter account. After the break, the Americans returned suit, pressing Scotland and attempting to set the tempo. However, more of the same persisted. When the substitutions came, a youthful injection in the 63rd minute quickened the pace considerably. Aron Johannsson put in his best performance in a U.S. shirt and continues to demonstrate the need for increased minutes. Brek Shea again showed his consistent ability to provide a spark off the bench. Overall, minus the typically strong performances from Michael Bradley, Jermaine Jones and Tim Howard, there weren’t too many bright spots on the night. Let’s examine the squad’s performance and assign numerical value.

Tim Howard
With Clint Dempsey on the shelf, Howard donned the captain’s armband once again, commanding the net with his usual vigor. He wasn’t called upon much in the first half, but was required for some heroics in the 53rd minute, palming away a free kick effort from Robert Snodgrass that had eyes for goal. With the draw, Howard has four consecutive clean sheets for club and country. Rating: 7 Brad Evans He had some good 1v1 stops on the Scotland left flank, but his tendency to move central was too often on display. He was not without blame on some of the better chances from the Scots; including leaving Conway open to take the best chance of the first half. He left his side unprotected on a few occasion and got outright burned on a few more, though Alejandro Bedoya dropped in to clean up a few miscues. Evans had some decent spacing moving forward in attack, but it was largely a pedestrian affair—one that could give Eric Lichaj a window of opportunity.Rating: 4.5 Geoff Cameron
Some sloppy mistakes on his behalf helped put Scotland in dangerous positions early. A poor miscue in the 35th minute saw Cameron make a foolhardy advance on a Scottish throw-in that the Tartans nearly converted, if not for a Craig Conway shank. He made some poor fouls and was pulled out of position far too easily, twice giving up dangerous free kicks, one in the 53rd minute that required a heroic save from Tim Howard. His offensive forays did manage to pay dividends on a few occasions, including a slaloming run in the 58th minute that set up an Altidore shot, the American’s best chance of the match at that point.Rating: 5 Omar Gonzalez
Gonzalez was forced into action early with Scotland on the front foot in the opening minutes. He outjumped Fletcher on a few occasions to interrupt some sharp early service but did give away a dangerous free kick or two with some sloppy coverage. He was his usual dominant self in the air and did a good job breaking up the myriad of Scotland crosses floated into the box. His 12 clearances led all players.Rating: 5.5 DaMarcus Beasley
He did his thing. Beasley bombed the wings and got into some dangerous positions but failed to deliver an effective final ball. It was, however, a solid defensive effort. Beasley stayed in front of his man and as strong facing down the Scottish attack with a couple of well-timed interceptions. He had an early shot, but that was nearly the extent of his contributions in attack.Rating: 5.5 Jermaine Jones
It was a quiet match for Jones. He broke up his share of attacking forays but never put his usually authoritative stamp on the game. He was solid as usual. Moving on.Rating: 6 Michael Bradley
Is it a relief to have the Roma midfielder back on the field again. Bradley’s presence and unflappable leadership invigorates the squad, oftentimes willing his teammates to a higher level. Despite the result, Bradley once again demonstrated his irreplaceable worth; leading the squad in touches, passes, and completion percentage. He attempted to lead out of the back despite a disjointed overall performance and put in a solid defensive effort as well. Rating: 6.5 Eddie Johnson
Johnson did not put in a strong performance. His heavy touches, lack of a wide orientation and stifled movement hurt the U.S during several attacks. He had the tendency to drift centrally and never really got into a dangerous position, made evident by his heat map and zero pass attempts in the final third. He moved up top, pairing with Altidore, briefly in the second half before begin replaced by Brek Shea, who looked the bigger threat on goal.Rating: 4 Sacha Kljestan
In a nod to recent goalscoring form, Klinsmann slotted the Anderlecht man in the attacking midfielder role against the Scots, in place of the injured Clint Dempsey. Kljestan has rarely featured in the role—never under Klinsmann—and it showed. He drifted early, finding himself dropping deep and outside rather than trying to pull the strings centrally. He made only two passes inside the attacking third and had trouble influencing the U.S. attack. Kljestan put in a workmanlike performance and covered tons of space, but it was ultimately a disappointing audition. Rating: 5 Alejandro Bedoya
Bedoya didn’t see much action on the right wing. He managed to get off a few crosses, none successful, but his contributions were few and far between. Bedoya worked hard on the defensive end, falling back when Evans found himself out of position. He made some careless giveaways, but redeemed himself with some impressive recoveries. Most notable was a hustling, 30-yard tracking run to earn a corner kick near the end of the first half. Rating: 5.5 Jozy Altidore
As has been the tendency, without a second man making late runs, Altidore had few touches in the first half. Things improved after the break, especially with the addition of Aron Johannsson, who allowed Jozy the space to operate on the ball. His hold-up play was spotty at times, with a couple of poor touches letting him down and killing U.S. forays. However, you can’t fault him too much considering some of the sub-standard service coming his way. Same song, different verse for the Sunderland man. Rating: 5

Aron Johannsson
His first touch was an audacious nutmeg of a Scotland defender. His second touch was another that nearly led to a goalscoring opportunity. No doubt, Johannsson has a special flair to his game that seems to energize the U.S. squad when he’s on the field. He worked well with ex-AZ teammate Altidore, leading to some dangerous interplay, including two shots in the final 15 minutes that could’ve delivered the win the Americans. His attempt in the 82nd minute was bound for goal had it not been for a great save from the Scottish keeper. If a goal was going to come, Johannsson would’ve been the likely culprit. He needs to start. Rating: 7 Brek Shea
He came, he saw, he gave it away a few times. Then he did something good. It was Shea’s traditional mixed bag performance. He is often criticized for being one dimensional, but sometimes that’s good enough. Replacing Eddie Johnson—who found himself straying from the touchline all night—Shea’s runs and wide play gave space to the midfield, leading to the best chances of the night. In the 84th minute Shea made a stampeding run into space but placed the final ball just behind Aron Johannsson, who had to re-adjust and scuffed his chance. As long as he is able to provide a consistent spark off the bench, he will be part of Klinsmann’s plans. Rating: 6 Mix Diskerud
The Mane Man was almost invisible in his 27-minute shift. Replacing Jermaine Jones, he was helpful in possession, though had a few more giveaways then you would like from your central midfielder. Rating: 5 Eric Lichaj
It’s difficult to quantify Lichaj’s performance given an 18-minute sample size in his first appearance for the national team in more than two years. He looked capable in his limited involvement and managed to connect with a couple of accurate long balls out of the back. Tragic follicle choice, however. Why channel Clint Mathis, Eric?Rating: 5.5 Chris Wondolowski
Coming on for Bedoya, Wondowloski moved out wide, where he saw some time this season for San Jose. However, he had less than 10 touches in his brief cameo; not enough to warrant a mark.Rating: N/A Terrence Boyd
Got on in stoppage time and had a shot blocked in front of goal before the final whistle blew.Rating: N/A

Jurgen Klinsmann
Klinsmann's strong suit is in-game adjustments and he proved it again on Friday night in Glasgow. His pre-game decision to move Sacha Kljestan forward, occupying Clint Dempsey's traditional role, didn't provide the necessary creativity in midfield and hurt the U.S gameplan, so he brought on Johannsson, Shea, and Diskerud to liven up a listless outing. Some of his other roster choices—hardly egregious—simply didn't perform to their normal level. Klinsmann now must carry the performance into Tuesday's match against Austria. We will see if it inspires any significant changes. Rating: 5.5 OK, your turn. Agree with these ratings? Disagree? Sound off below, and create your own ratings right here.