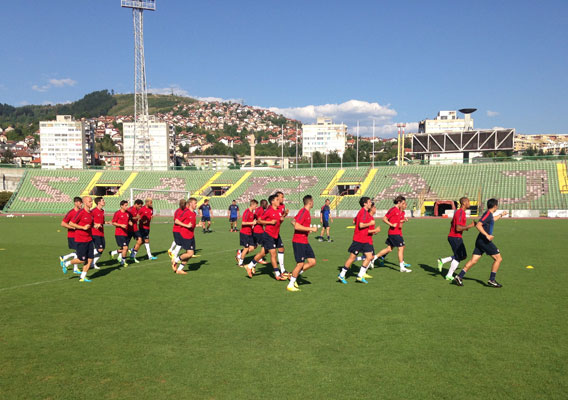 Tuesday Training: The U.S. Braces Itself for Bosnia

ASN correspondent Graham Ruthven checks in with a report from the second day of training, including a collection of smartphone photos to help set the stage for Wednesday's friendly against Bosnia.
ASN Slideshow

BY Graham Ruthven Posted
August 13, 2013
9:15 PM
SARAJEVO, Bosnia-Herzegovina—Jurgen Klinsmann and the United States men's soccer team conducted its final training session ahead of Wednesday’s friendly fixture against Bosnia, getting acclimated to Kosevo Stadium, where the game will be played. I had already familiarized myself with the venue the night before (albeit accidentally), and now it was the American team’s turn to experience the home of FK Sarajevo. (Although for them the gates were open.) While the U.S. has struggled with suspicious playing surfaces recently (most notably in Dallas for the Gold Cup semi-final), I expect no such problems in Sarajevo. The field looked immaculate as I walked round the running track that lines the perimeter—something that could help Klinsmann’s brand of fast, possession-rich soccer. Before its warm-up, the team was joined by 30 disabled children from the charity foundation "It’s about ability," and the U.S. ambassador for Bosnia also joined in for a genuinely nice photo opportunity. I grabbed Jozy Altidore and Sacha Kljestan for a chat before the start of the session, angering a rather sizable contingent of local journalists by poaching the former for myself. As the Bosnian media sulked, Altidore asked me where I am from. “Scotland,” I replied. “Man that’s a cool accent,” he told me. That’s going on my resume. My interview with the Sunderland forward was cut a little shorter than I would’ve liked, but only because Klinsmann could be heard calling Altidore over into the group. As the last remaining media member on the sidelines as Klinsmann’s session kicked into gear, I was kindly told to "get the hell outta here." I did what I was told.