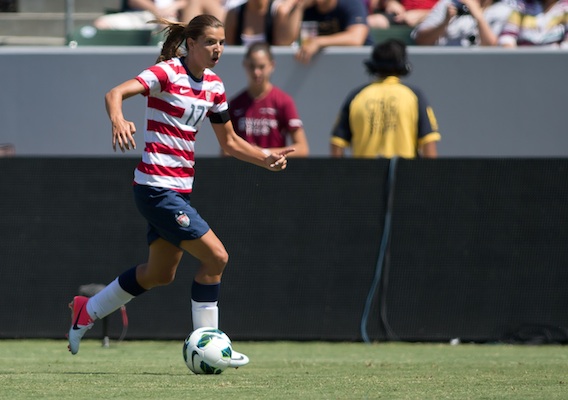 Heath and Cheney Are the USWNT's Future

The world talks about Abby Wambach, Hope Solo, and Alex Morgan, but two rising stars provide a much better example of where the United States women's national team needs to go.
BY Maura Gladys Posted
November 07, 2012
5:03 AM

In just 11 seconds on October 20th, Tobin Heath and Lauren Cheney demonstrated just how essential they are to the future of the U.S. women’s national team. In the second minute of the Stars and Stripes’ friendly against Germany at Toyota Park in Bridgeview, Ill. Heath tracked down a defender deep in Germany’s half, muscled the ball away, and squared it to Cheney. Upon receiving the pass, the midfielder one-touched a through ball to an in-stride Alex Morgan who found Abby Wambach at the far post for the goal, putting the Americans up 1-0.

Neither the 25 year old Cheney nor Heath, now 24, got her name in the scoreline for that play, but each was instrumental in creating the goal. That tends to happen when the duo are on the field. But with the appointment of new coach Tom Sermanni and the transition to a new era of U.S. women’s soccer, Heath and Cheney will rise from sometimes-starters and setup experts to major players, controlling the pace of the midfield and the tempo of games. If Alex Morgan is Pia Sundhage’s legacy, the pair has the potential to be the next coach’s lasting mark. They epitomize the type of player who will make up the USWNT of the future: versatile, fast, technically gifted with impeccable vision, and an ability to create. These more nuanced traits will mark the new team, subtly altering the American focus on muscle and athleticism. The shift has been occurring for some time. “It seems like both Tobin Heath and Lauren Cheney have been around for much longer than either actually has,” NBCSports.com's Lauren Barker says. Cheney was a member of the 2008 Olympic squad, but came to prominence at the 2011 Women’s World Cup in Germany. She notched two goals and three assists, while being a huge presence in the midfield at a time when vet Carli Lloyd was struggling. Cheney brings a dynamic creativity and an ability to distribute that few others on the squad can. “As great as Wambach and Morgan are up top, they still need someone to get them the ball, and I think Cheney still remains that central creative force,” ESPN columnist Jeff Carlisle says. The only major strike against the midfielder is that she seems injury prone. She had to leave the 2011 World Cup final against Japan after suffering an ankle injury and took another ankle knock in this summer’s Olympic Games. It kept her out of the starting lineup for the gold medal match.

Heath’s case is a bit more intriguing. She saw little action at the 2011 World Cup but put in impressive performances at the CONCACAF Olympic Qualifying tournament in January and Olympic Games. She has the best ball skills on the team, an ability to thread the needle with passes, and a grittiness that sometimes borders on too-rough. Her versatility is impressive, but it also comes with risk. “It’s almost a curse,” says Carlisle. “She can be an attacking midfielder, she can play a deeper role, she can play out wide. It’s definitely going to be interesting to see how she ends up being used.” Heath is less consistent than Cheney, occasionally disappearing completely for long stretches. But, as she sees more time in bigger situations, she should shed that problem. “She's extremely talented with the ball, but too often undermines her own work trying for one too many touches or the fancy play instead of the smart one,” Barker says. “If she can find a way to make the creativity and the more direct game the U.S. seems to favor meet somewhere in the middle, Heath could flourish.” She did just that in the United States' friendly against Germany on October 23 in Hartford, CT, when she pounced on an Alex Morgan cross and coolly fired it in for the score. (Cheney, of course, started build up to the goal with a beautifully weighted through ball over the defense to Morgan.) The presence of Heath and Cheney in the starting XI has repercussions. Shannon Boxx and Carli Lloyd have marshaled the central midfield for the past four years. The 35-year-old Boxx is set to retire soon, but Lloyd is another matter. She struggled during the Women’s World Cup in 2011, making the transition to Cheney seem logical and inevitable. But she came back this summer, scoring four goals, including two in the goal medal game against Japan. Lloyd’s departure seems less likely, creating another challenging situation for the new coach. If Cheney and Lloyd are paired with each other in the center, Lloyd will most likely have to drop back to a holding mid role, a challenge for such an offensive-minded player. Heath could potentially step into that holding role. She certainly has the bite to do so, but she is probably be better suited on the wing, or as another attacking midfielder. Then again, Heather O’Reilly and Megan Rapinoe have already established themselves as class wingers, meaning the inclusion of Heath in the starting lineup would either signal a formation change or mean bumping another starter, such as O'Reilly, to the bench. We will see. Both Tobin Heath and Lauren Cheney have slowly built an impressive pedigree, with more than 50 caps, two Olympic gold medals, and a World Cup silver medal under their belt. The duo will be in good hands with Sermanni. During his time with the Australian women’s national team he proved his commitment to featuring younger players in the squad and his deep and vast handle on the game means that he can find creative ways to get the most out of Cheney and Heath’s skill sets. The time is now. They’ve spent enough time observing and growing, and are poised and ready to seize a chance to shine. It’s Sermanni's job to figure out a way to let them.

Maura Gladys works in production for KICKTV. She also runs the goalkeeping blog All You Need Is Glove.