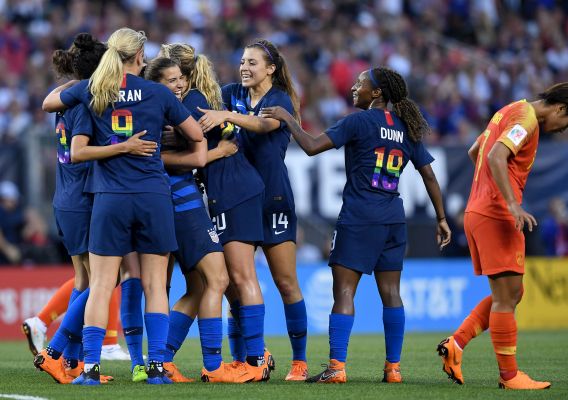 Three Thoughts on the U.S. women's 2-1 win over China

The United States women's national team defeated China for the second time inside of a week. ASN's John Halloran is here to break the game down for you with his thoughts.
BY John Halloran Posted
June 13, 2018
5:00 AM
THE UNITED STATES women’s national team wrapped up a two-game series against China on Tuesday night, beating the Steel Roses for the second time in six days.

The Americans opened the scoring in the contest in the 35th minute when Christen Press—who earned her 100th cap on the night—served in a pinpoint cross that Megan Rapinoe headed home. The match entered the halftime break with the U.S. holding the lead, but midway through the second stanza China capitalized on a total defensive breakdown to equalize.

However, the Americans mounted a comeback only three minutes later with Tobin Heath notching the game-winner, again on an assist from Press, to restore the lead for the Yanks as the U.S. cruised to the 2-1 win.

Here are three thoughts from the match.

DUNN CAN PLAY WHEREVER SHE WANTS


Crystal Dunn has always been a bit of an enigma. She helped lead the University of North Carolina to a national title in 2012 while playing the first half of the season as a center back and the team’s NCAA playoff run as an attacking midfielder. In between—missing half the season while on duty with the U.S. youth team—she helped lead the U-20’s to a World Cup title as a right back.

As a professional, Dunn largely settled in as a forward, where she won the National Women’s Soccer League Golden Boot and Most Valuable Player Awards in 2015. Then, after the 2016 season, she went abroad, where she ended up playing as a left wing-back at Chelsea.

Despite her versatility—or maybe simply because of it—many fans and pundits reacted with consternation when U.S. head coach Jill Ellis started using Dunn in the backline this year. Some felt Dunn’s offensive talent would be wasted in the back, others seemed to think Dunn should be allowed to settle into a single position on a more permanent basis after years of moving around.

The fact of the matter is, however, that Dunn can play wherever she wants. She’s that talented. And with the U.S. full of options on the front line and still trying to find a solution to its issues at outside back, Dunn is needed more in the defense.

Since moving on from the Ali Kreiger-Meghan Klingbenberg combination that started for the U.S. during their 2015 World Cup run, Ellis has struggled to find the best tandem to lock down the wide spaces of her backline. Kelley O’Hara is certainly worth a starting position when healthy, but from there the options are both numerous and inconclusive.

Dunn, for her part, provided an excellent attacking outlet for the U.S. in these past two games from her position at left back. She served in some of the most dangerous balls against China in the first friendly in Utah and continued to trouble them again on Tuesday in Cleveland.

Certainly, her touch could be more refined, but Dunn is aggressive, loves to take players on 1 v. 1, and has the best recovery speed in the player pool when she does get caught upfield. The consternation among fans shouldn’t be that Dunn is playing in the back, it should be why she wasn’t playing there sooner.

Even in a world full of hyperbole, it’s difficult to overstate how good Alex Morgan has become.

When she first came into the national team set-up, Morgan gained notoriety for her ability to get in behind defenses. But over the years, she has slowly added more tools and today she is the most dynamic forward on the planet.

Sure, the speed is still there, but a close observation of Morgan’s play reveals so much more. She can consistently hit a pinpoint strike into the net, tucked just inside the low far post. She also battles in the air as well as anyone on the U.S. squad—demonstrated again last Thursday with her game-winning goal off a Megan Rapinoe dead ball.

Recently, she has become even more physical playing with her back to goal, a valuable asset in her role as the lone center forward in the team’s 4-3-3.

Morgan can now not only can handle the contact, but she seems to relish it. One of the most difficult things to teach a striker is to initiate the contact, rather than wait for it. Yet, Morgan’s play of late seems to have fully embodied this more aggressive style of play.

While China held her scoreless on Tuesday night, Morgan is clearly the lynchpin to the U.S. attack, holding up play both in transition and the final third. Against China this trait might be overlooked. Against better opponents, it’s invaluable.

The only real problem is that the U.S. clearly doesn’t have another player with Morgan’s unique skillset. Lynn Williams can match her physicality, but not her technical quality. Press can match her technical quality, but not her physicality. Perhaps a fully fit and in-form Amy Rodriguez could get the job done, but it’s hardly a guarantee. In the team’s last two games, Ellis has even gone to the extent of trying Carli Lloyd in the No. 9 position as an option off the bench.

Should Morgan stay healthy and not need any rest at all during a World Cup run that could last a full month and encompass seven games, it won’t be a problem. But that hardly seems realistic.

THE U.S. CAN BEAT A LOW-BLOCK


The fan base of the United States women’s national team is one of the most self-loathing groups in soccer, constantly convinced that disaster is right around the corner.

This month’s group-think fear seemed to be that the U.S. can’t beat a low-block, the type of defending China used to stymie the American attack for long stretches.

First, it should be admitted that teams deploy this strategy because it works. It is far easier to destroy rather than create, and teams use this tactic to nullify the advantage of superior teams and have done so for years. CONCACAF teams frequently use it against the U.S. and, most recently, Sweden used it against the Americans in the 2016 Olympics—most memorably resulting in Hope Solo’s “cowards” comments after the Swedes eliminated the U.S.

While the U.S. did struggle to run up the score against China, they did break down the block repeatedly in both games. Yes, the Americans’ finishing could have been better, but there’s also no doubt that the attack of this U.S. squad is much better than the 2016 version.

Morgan is finally back in top form, as is Rapinoe—who entered the 2016 tournament fresh off an ACL recovery. Mallory Pugh is a few years older and Lindsey Horan more settled into her role as a center midfielder. Julie Ertz is now holding down the fort as the team’s No. 6 and the creative Sam Mewis is now a regular starter.

Of course, the Americans do still need to sort out their defense—finding consistency at goalkeeper and a stable backline—but the U.S.’ offense is undoubtedly in a better position than two years ago.