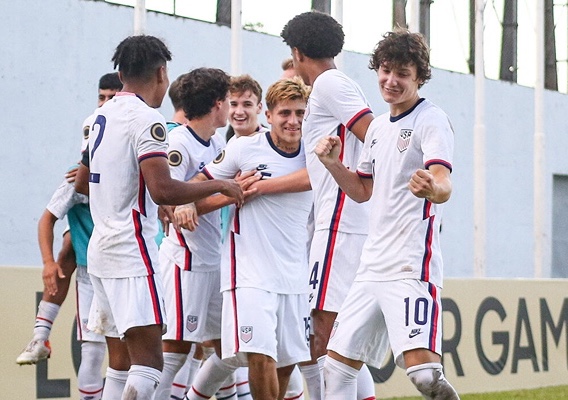 Led by a two goal performance from Paxton Aaronson, the United States is off to the 2023 U-20 World Cup following its 2-0 win over Costa Rica. The job, however, is only halfway done as 2024 Olympic qualification is on the line Friday night vs Honduras. ASN's Brian Sciaretta breaks down the game in detail.
BY Brian Sciaretta Posted
June 28, 2022
11:05 AM

THE UNITED STATES U-20 national team qualified for the U 20 World Cup on Tuesday after a 2–0 win over Costa Rica. It was a hard – fought when that was ugly at times, but the United States prevailed thanks to two goals from Paxton Aaronson.

One of the keys to the game for the US team was to take advantage of opportunities early. Costa Rica was the US team’s toughest opponent so far and the US team had to take control of the game early and not let the Ticos remain in the game.

The United States was successful in this, although not as much as they hoped. Aaronson scored in the fourth minute on a lovely build up that started with Alejandro Alvarado playing Quinn Sullivan out wide. Sullivan then sent a pass back across the box to Aaronson, his teammate in Philadelphia. Aaronson made no mistake with a left footed finish.

Costa Rica responded well to the United States taking the lead. Chris Brady had to make three saves the remainder of the half and the game was even until the break.

The US team should have been out more, but they missed two unbelievably good chances in the remainder of the first half. Quinn Sullivan had an opportunity that he would normally convert but Costa Rica’s goalkeeper, Bayron Mora, made a brilliant save.

The beginning of the second half was eventful. The United States scored again early in the half on another goal from Aaronson. The play started with right back Michael Halliday sending in a cross that found Caden Clark. Clark then headed the ball back across the goal for Aaronson who finished from close range.

Just minutes later, Costa Rica squandered its best opportunity in the 52nd minute. A handball in the box from Mauricio Cuevas gave the Ticos a penalty - Brandon Aguilera shot sailed over the goal and the game remained 2-0.

That miss seemed to deflate Costa Rica who was never dangerous the rest of the game.

The biggest story of the night came after the final whistle. When the US went out to the field to celebrate their win, Costa Rican players confronted the Americans. Punches were thrown, some players were kicked, and it left a black mark on what was a hard-fought game.

The United States achieved one of their two goals for this tournament in qualifying for next year’s U–20 World Cup in Indonesia.

The cycle will now continue after this tournament, and the United States can build for another top international tournament at the youth level.

The second goal, and perhaps the biggest priority, will take place on Friday night when the United States will take on hosting Honduras, with the winner qualifying for the 2024 Olympics in Paris. The men’s program in US Soccer has not qualified for the Olympics since 2008.

Much like his older brother, Paxten Aaronson is a very effective player who can come up in big moments. This younger Aaronson probably has the biggest upside of the players on this team. 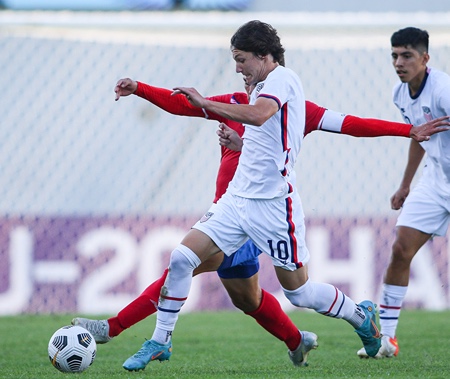 That is saying a lot because a lot of players on this team will probably have long and successful careers in the sport. It is a fun team, and it is very attacking oriented. But Aaronson‘s vision really makes the whole team play more cohesively.

My guess is that when he returns to Philadelphia after this tournament, he begins to take a bigger role within Jim Curtin‘s team. From there, his development should skyrocket with more professional minutes.

With Aaronson netting two goals, Philadelphia Union players have scored 10 goals for the United States in this tournament. Quinn Sullivan has five. Aaronson has four. Jack McGlynn has one.

But beyond the goals, they are all playing well. This includes Philadelphia Union defender Brandon Craig who struggled against Canada but was very good against Costa Rica. All of the Union players are participating in the attack, and they fit very well into the pressing style that U-20 head coach Mikey Varas wants to play.

For example, Sullivan did not score against the Tico‘s but his assist made it happen. Craig, meanwhile, is a Central defender that can take free kicks well and his deliveries in the box created numerous chances.

The entire union organization should be very proud of how big they are contributing to the U-20 team and also the U-17 team. They are not just successful in development, but their entire organization wins while doing so too. These youth tournaments have reflected very well on their organization.

One of the big takeaways for this game is that the US team’s defense looked improved. Costa Rica had a lot of possession and a lot of free kicks. The back line of the United States held up very well. Even the penalty they conceded was more of a fluke handball than a bad play.

Coming into this tournament, success was going to hinge on the backline. The US team had the attacking talent but defense was going to be an issue. That concern was heightened during and after the Canada game. But this was a good performance.

One of the reasons why the US backline has improved is also with the consistently strong performances they are getting from the defensive midfielders. Varas is rotating Daniel Edelman and Rokas Pukstas at the No. 6 and both are delivering big. That is making things a lot easier for the defenders.

When speaking to the media after the game, Varas said that he hopes Concacacf investigates what happened after the final whistle. The video and the pictures that emerged paint a very ugly picture of Costa Rica‘s behavior.

US goalkeeper Antonio Carrera was kicked in the back. Jalen Neal, the US central defender, was hit in the back of the head. Paxten Aaronson was also kicked.

Because you can’t spell “CONCACAF” without “CHUCK NORRIS” pic.twitter.com/C4bZHGbGSk

The US responded, but Costa Rica clearly instigated the incident. The U.S players were simply looking to celebrate their win.

The game itself indicated that the teams did not care for each other. There was pushing and shoving throughout the game, but that happens. The near brawl after the game was uncalled for, even in Concacaf where you always have to expect the unexpected.

Expecting justice from Concacaf is often expecting too much. But to anyone watching, several of the Costa Rican players should be suspended from international play. Costa Rica’s own federation should think about suspending them from domestic play as well. 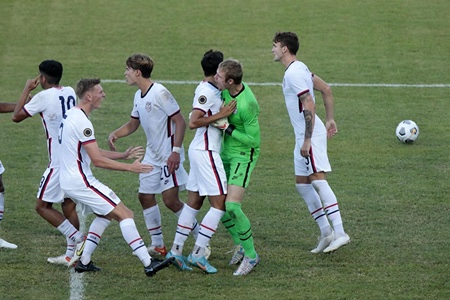 Looking ahead to Honduras

The United States fans should be very happy with the teams performance on Tuesday night. Costa Rica has a good U-20 team. The fact that the United States had to fight so hard is more reflective on Costa Rica‘s quality than any struggles the US team had.

The United States has put itself into a good position. The team is playing well and it is improving on its weaknesses as the tournament progresses. 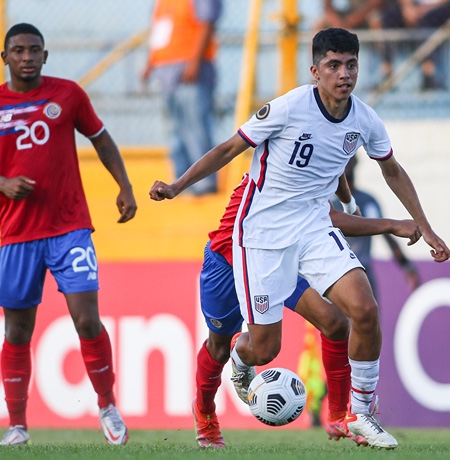 Awaiting them will be Honduras, and this will easily be the toughest test. It is not that Honduras is simply a good team, but they are the hosts.

The Honduran team has been very well supported in this tournament. In their win over Panama on Tuesday, the stadium was full and providing a lot of support to their team. It will only be even more emotional and intimidating on Friday with the Olympics on the line. For the younger age groups, it is even tougher to go away and play in such an environment with a lot on the line.

Mikey Varas will have to rotate some of his squad while also keeping a good chunk of the core together. At this point, it will be very tough to change the backline too much. Halliday played well against Costa Rica, but he could be replaced by Noah Allen and move Cuevas to the right side.

In the midfield, Alvarado had a great game against Costa Rica, but he is also interchangeable with Jack McGlynn and getting fresh legs into the starting lineup might make sense. Diego Luna also might swap with Cade Cowell

Everyone knows now the importance of qualifying for the 2024 Olympics. It would open up yet another important tournament for young American players.

Also, the Olympics are a U-23 tournament, so it would then open the door for opportunities for the 2001 and 2002 birth years. That is different from this U-20 team which is for the 2003 birth years and younger. So qualifying for this tournament opens the door for two birth years who are not involved at the youth levels right now. This means U.S Soccer could then start calling up players like John Tolkin, Joe Scally, Ben Bender, Tanner Tessmann, etc.

Your #U20MYNT is qualified to the 2023 FIFA U-20 World Cup in Indonesia! pic.twitter.com/ynhzpvoppy

But beyond that, it is just a healthy sign that American soccer is on the right track. So much has been going its way this year. The senior national team qualified for the World Cup, the Seattle Sounders won the CONCACAF Champions League. The U-20 team qualified for the U-20 World Cup. American players are in high demand in the global marketplace more than ever before. Now the Olympics would be another feather in the cap.

These Olympics would take place in 2024, two years before the United States does a majority of hosting for the 2026 World Cup. It would be a great way to build a public enthusiasm for the program ahead of hosting the sport’s biggest tournament.

Things are clearly trending upward in American soccer, qualifying for Paris would be yet another big step.